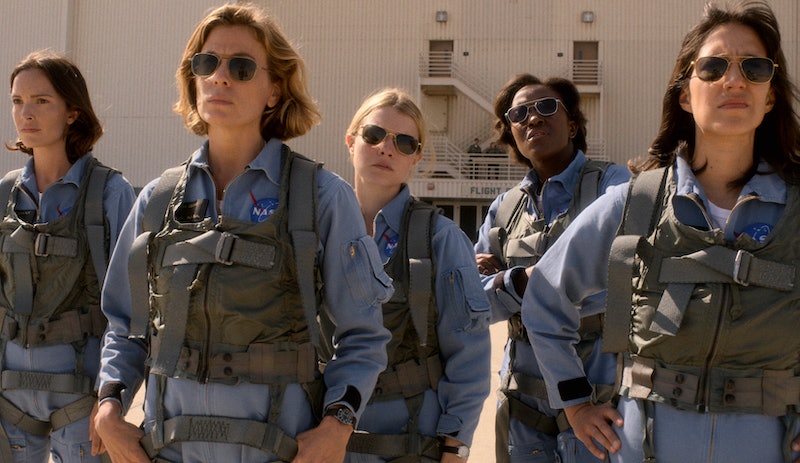 Considering that, in the 50 years since the first man landed on the moon, a woman has yet to do the same, Apple TV+'s For All Mankind is revisionist history in more ways than one. Not only does the show create an alternate timeline in which Russia beat the U.S. in the '60s space race, but one in which the president was actively trying to give women the same opportunity. It does get one thing right, though: women have been involved in the space program for decades.

However, that all could have happened much earlier if the Lovelace's Women in Space Program hadn't been scrapped in the '60s. As reported by the Verge, the project was founded in 1959 by Dr. William Randy Lovelace, who did physical testing for NASA. He ended up doing privately funded tests in Albuquerque, New Mexico, where 25 female pilots were given the same tests that Dr. Lovelace had facilitated for the male astronauts.

These female pilots did very well, even faring better than the men in some capacities. "We are already in a position to say that certain qualities of the female space pilot are preferable to those of her male colleague," Lovelace said in 1960, per a 2009 study published by the American Physiological Society.

However, the program was abandoned in 1962, after President John F. Kennedy announced his decision to send a man to the moon. Seven years later, Neil Armstrong brought those plans to fruition, but he's one of only 12 people to have walked on the moon. Eugene Cernan, who piloted Apollo 17 in 1972, was the last person to do so. As for why no one has been to the moon in almost 50 years, NASA Administrator Jim Bridenstine told Business Insider "the program took too long and it costs too much money," and there was too much "political risk."

Fortunately, there are still plans to put a woman on the moon, and it's slated to happen relatively soon. NASA's Artemis program is projected to land on the moon in 2024, carrying "the first woman and the next man," according to their project description. NASA hasn't revealed who this historic woman will be, but she's among the 12 astronauts already in the space program.

And despite not having been to the moon, women have still found ways to make history in space. As recently as Oct. 18, Christina Koch and Jessica Meir performed the first all-women spacewalk.

"I think it's important because of the historical nature of what we're doing and that in the past, women haven't always been at the table," Koch said in a news conference, per CNN. Mei echoed the sentiment, saying, "What we're doing now shows all the work that went in for the decades prior — all of the women that worked to get us where we are today."

So when the first women does land on the moon in 2024, she can thank Koch and Meir for helping to get her there.