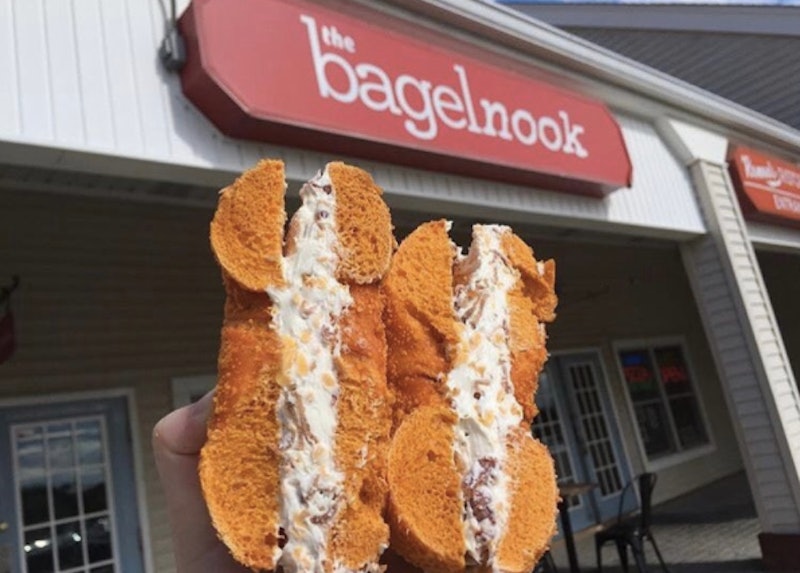 Take a quick moment to check in with yourself today and ask: are you ready for the majesty of the flaming hot Cheetos bagel? And if you're not sure, sit yourself back down again and ask: in a year already filled with so much chaos that your brain is about to burn down, shouldn't your food, too?

Because yes, these bagels are flaming, in the literal sense of the word. Posted onto the Instagram of Freehold, New Jersey's The Bagel Nook, the bagels — baked with flaming hot Cheetos and dyed red and gold — were introduced to the world in a plume of fire, along to the tune, "Highway to Hell." Which is, I assume, where your tastebuds head if you are among the bold souls willing to try this new concoction spread with their ghost pepper chili cream cheese. (Never fear, fellow weaklings: the rest of us can enjoy it with a cool ranch cream cheese.)

The bagel is just one among many of The Bagel Nook's ambitious bagel undertakings, but I think it's safe to say that this one is the most aggressively Gryffindor of them all. Are you fierce enough to behold this strange new hybrid?

Did that just weirdly prepare anyone else for world domination, or ...?

In any case, if you need to add a little fuel to your fire in 2017, look no further than this bagel, y'all. Or if you're afraid your tastebuds are not up to the challenge, call in its cousin, the Doritos bagel, which was featured alongside the Flaming Cheetos bagel as the ultimate hangover-curing duo.

And just in case you saved room for dessert, you can always cleanse your palate from the ~burn~ by getting yourself one of these gloriously oversized monstrosities, the Oreo Overload.

Don't cry too many bagel-sized tears if you don't happen to be within driving distance of The Bagel Nook — thankfully, they offer nationwide shipping on some of their more popular combos. And in the meantime, the world is your oyster, and no one is stopping you from topping your cream cheese bagel with an entire bag of Flaming Hot Cheetos all on your own, y'all.