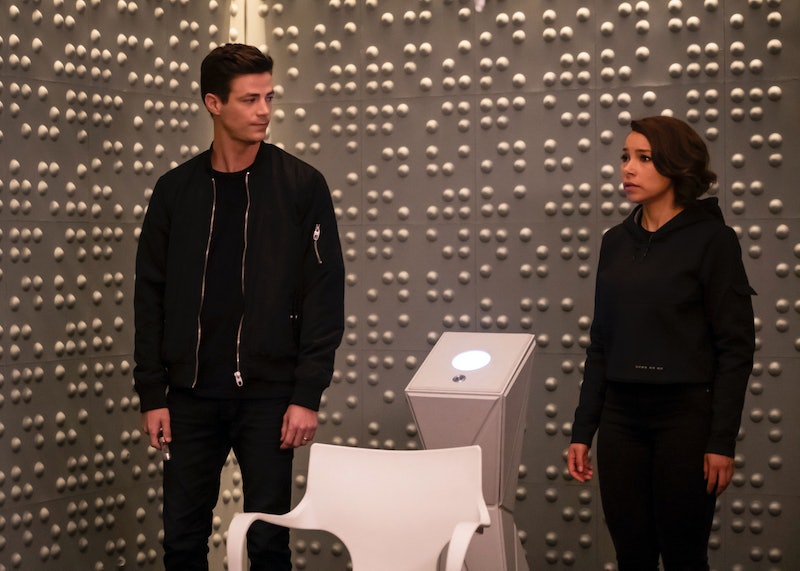 Start preparing yourself now, because time travel is coming back to The Flash — and a lot of it. The upcoming 100th episode of The Flash is a big milestone for the comic book series, so the writers decided to use the hour as a fun celebration of the past four seasons in a way that shakes up everything this season. It's crazy and exciting, but it also means that the episode will be extremely confusing — perhaps more than any episode of The Flash so far. In fact, it was so confusing that even the stars had trouble understanding everything that happens in it the first time they read through the script.

Standing on the red carpet for The Flash's 100th episode party in Vancouver, I made sure to ask each of the stars how many times they needed to read through the script to catch all the Easter eggs and understand the gist of the story. Series star Grant Gustin just wished he had time to read it through more than once.

"It's crazy, I know," he tells Bustle with a sheepish grin. "I mean, honestly, by the time we started shooting it, because everything is so under the gun and delayed, I only read every episode once. Honestly, I read it once when we start shooting and then as we go, you're trying to connect things and flip through it and review scenes. But this one got a little crazy!"

With all the time travel and big reveals that drop in the hour, Gustin warns this is a big episode for Barry Allen, so he tried his best to portray even what he didn't understand. "I wish we had the time to read these scripts seven times and work through them but we just don't, sadly," he says, before trailing off hesitantly. "But I think I made enough sense of it."

When I tell him it definitely looked like he understood all of his lines in the hour, he smiles and laughs. "It looked like I understood what I was saying? Okay, good!" he says. "That's pretty much the baseline goal."

For star Tom Cavanagh who has played countless different characters on The Flash so far, the episode is a big one with a lot of important scenes. He also directed the hour, as if he didn't have enough on his plate as is. So how many times did he have to read the script to not only play all his scenes correctly but also successfully direct the entire thing?

"It's so funny that you ask that; I would give you a number and it would sound fake," Cavanagh says with a big smile. "There is nothing that I didn't know about that script. That stuff got so worn and torn I had to have seven different scripts nearby. And honestly it's because of people like yourself, the reason we're here, it sounds semi like I'm pandering but it's really true, without the fans, we're not here."

Without spoiling the episode, despite Barry learning a hard lesson about time travel in seasons past, it comes back into play when his daughter Nora (Jessica Parker Kennedy) comes up with a plan to defeat Cicada (Chris Klein) that involves going back to key points in Team Flash's (and The Flash's) history.

"The challenge with this one, for me, was let's not just go visit the greatest hits. Let's make the story of the 100th something that not only encompasses that but is a really riveting story," Cavanagh says of having to deal with time travel. "The writers did that and as the director, once it's on the page, it's just like, don't mess it up. Don't screw it up because this could be really good. That means a lot of sleepless nights, but I love being in the things that I direct, because that's one less person to yell at."

With time travel comes the possibility that the show is entering a new timeline like that of Flashpoint, when changes to the past affect the future. For Candice Patton, that meant having to remind herself of previous seasons' plot points. "It was a lot of stuff that we were bringing back and calling back to that I couldn’t even remember myself," she says. "But I think the two or three reads I usually do [of episode scripts] was good enough."

At this point, Carlos Valdes has stopped trying to figure all the time travel stuff out and just goes with the flow. "Yeah, there's a lot of gobbledegook," he says with a laugh. "I'm not going to mess around with you here, I'm not going to lie or fib. I'm going to tell you straight up because that's the kind of guy that I am. Sometimes when I read it and I read the timey-wimey jargon and I can't necessarily understand it or how it's justified scientifically, I just keep the faith. I know that it makes sense in some way, I don't need to ask the questions."

He laughs, then continues, "All I need to do is just say the line and the audience will do the rest. They're the ones who are the experts with this stuff. These guys draw diagrams, they make video essays on all the theories and how the different timelines intersect and all that kind of crazy stuff that tends to give me a headache. To be honest with you, sometimes it doesn't make sense to me. But that's okay because it doesn't really have to make sense. It's science fiction — it's fake science. It's based on real science, but ultimately we're making it up."

For The Flash newcomer Kennedy, having not been a part of the show until last season meant that a lot of this episode's callbacks went right over her head. "I read the script three times but I still don't think I understand everything that's happening," she says with a laugh. "It was truly an episode where I could not wait to get to the next page. I love that episode. It's my absolute favorite episode."

He laughs, then adds, "I had familiarity with what happened in Season 1, 2, 3, all that stuff. But when we got the script, I was like, wait. What. Is. Happening? And where are we going after this? There was a lot to wrap my head around but it made sense after a few times."

So get ready to watch, rewatch, and watch the episode a third time to truly get everything that goes down in The Flash's 100th episode. It's a lot. You absolutely will need repeat viewings. You've officially been warned.