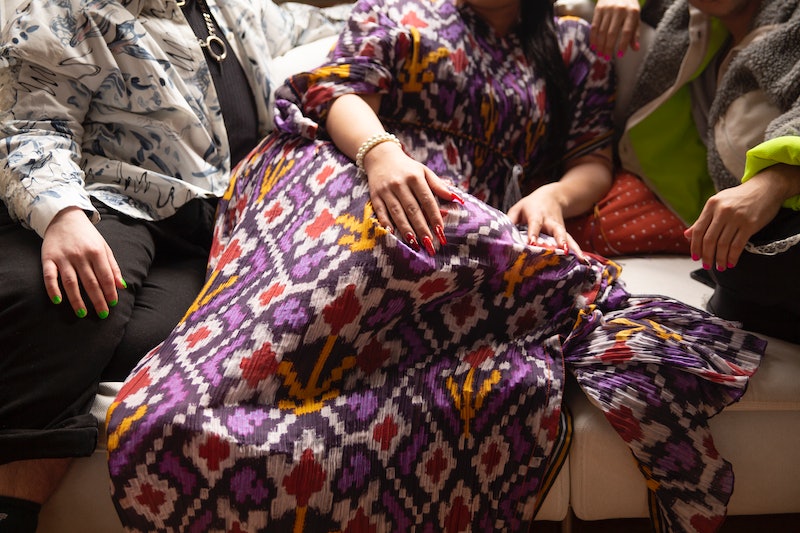 Have you ever gone to a dinner party to talk about your period? That’s what Lauren Schulte Wang’s friends were doing back in 2013. After years of getting yeast infections after her period thanks to irritating tampons, Schulte Wang was trying to figure out how to develop a better menstrual product. She started asking her friends about their periods — what worked, what didn’t, and what products they turned to every month. For the most part, her friends didn’t really think about the products they used. They just hated their periods.

“I started hosting weekly dinners to understand why people don’t like their periods,” Schulte Wang tells Bustle. “And what I heard when I read between the lines was that people send about a quarter of their lives not liking their own bodies. I felt really strongly that with a better product experience, they would have more comfortable lives and their period wouldn’t be something that they hated.”

So Schulte Wang committed herself to creating that better product experience with her menstrual product company, Flex. Their first product was a disposable menstrual disc, which not only collects menstrual blood, but reportedly relieves cramps for a lot of their customers because of how it's positioned at the top of the vagina. They’ve also recently released a menstrual cup that is “as easy to remove as a tampon,” thanks to a pull tab that features a loop for the person's finger to go through and that also breaks the cup's suction.

Both products have been informed throughout their development by feedback from a group that Schulte Wang has called “The Uterati” — an online community of over 2,000 members that swap period stories, give advice, and tell Schulte Wang what the period product of the future really needs to look like. The best part? Anyone can join.

What started as a small group of close friends swapping period stories over dinner and wine has grown to a community of over 2,000 members. Uterati member participation ranges from providing the Flex team with information about their periods in the hopes of creating better menstrual products to early access to new products.

And the insights that Flex has gained from the group are invaluable. For example, they learned that pad users were actually some of the earliest adopters of menstrual discs. Schulte Wang says that, as a group, they don’t use tampons either because they don’t trust the safety, they get yeast infections like she used to, or they just find them uncomfortable. According to the Uterati, menstrual discs solved these problems.

They also took feedback from the Uterati to help them develop their latest product. After realizing that their users wanted something that created less waste than tampons or disposable discs, Flex started developing a menstrual cup. However, they quickly learned that people had difficulty both with insertion and removal. They wanted something that was as easy to remove as a tampon — so the Flex team started working on it. Could the team that created the first advancement in menstrual products in a generation improve on the menstrual cup?

Then, in 2018, they came across a Kickstarter for Keela, a menstrual cup company that had developed a cup that was easy to remove, with little mess. Flex acquired Keela, changed the design to be manufactured at scale, and brought a menstrual cup to market that fit the Uterati’s requirements. (Side note: As someone who’s tried a lot of menstrual cups, I can tell you that the Flex is hands-down the most comfortable and easiest to use I’ve ever come across.)

As for the Uterati, any members can rest easy knowing that their information will stay securely with Flex. The company, Schulte Wang says, will never share or sell that data and information. The Uterati, she says, is sharing this very personal information because "they’re excited about having a voice in the products they use” — and Schulte Wang wants to respect that.

So what’s next for Flex and the Uterati? Schulte Wang says that a recent expansion putting Flex products into retail stores — where, she says, 94% of customers still buy their menstrual products — has opened the Uterati up to a whole new set of people and perspectives. People can join the Uterati by entering their email on Flex's site, or texting (424) 347-1212 to receive further instructions to join. Schulte Wang is hoping that these new voices will take Flex — and, by extension, the entire menstrual care community — in directions that no one has even dreamed of yet.