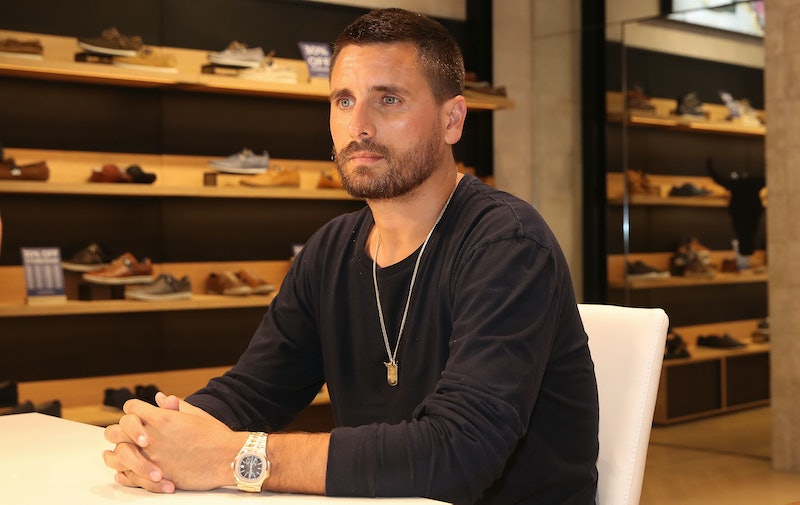 Scott Disick's long-awaited E! spinoff show, Flip It Like Disick, finally premieres Sunday, Aug. 4. Of course, having had the last decade of his life recorded for Keeping Up With The Kardashian, the Lord is no stranger to reality TV. But that was family. This is business. As such, the Flip It Like Disick cast is filled with talented people in the real estate business helping Disick buy and flip multi-million dollar homes in California — and trying to make them all a lot of money in the process.

While the show trailer did hint at some Kardashian/Jenner appearances (Khloé, Kourtney, and Kris to be exact), Disick is the star of this show. It's a first for him, because he's sort of a background character on KUWTK — especially since his split from Kourtney back in 2015. Plus, Disick has mostly been on KUWTK as a source of comic relief, so it's a nice change to see him front and center, and passionate about a business like flipping houses.

That being said, he probably couldn't do it by himself, so here's what you need to know about the rest of the people on Disick's flipping team, according to their E! press site bios.

Described as "Scott Disick's best friend and business partner," Luciano will be helping Disick pick which houses to flip and will be by his side throughout the process as Disick's "voice of reason." When he's not flipping houses, E! says he owns a luxury car dealership, and he and his wife just welcomed a baby.

Kozet is Benny's wife, but she's also his business partner — which kinda, sorta also makes her Disick's. She's a luxury real estate agent, so she'll be the one finding properties for the Disick team. Her bio says that she's a close friend of Disick's as well, and is someone he comes to for love and personal life advice.

Mor is Disick's contractor, but also fancies himself a designer. That may cause him to butt heads with the actual designer on the Disick team. But Mor's bio says that he's the only contractor Disick will go with because he trusts him so much. Mor also loves to surf, he loves his dog, and, per his Instagram, has been dating Hayley Carling, an online boutique owner and influencer, for a couple of years now.

Diamond is Disick's personal assistant, which means she handles his day-to-day, including his work on flipping houses. Her E! bio says she's been an intern at The Ellen Show, a fashion designer at Forever 21, a celebrity personal stylist, and a creative consultant for BuzzFeed. That's a lot of experience in a lot of fields, which likely comes in handy when working alongside Disick, who has a lot of irons in the fire himself.

Rounding out the team is designer Willa Ford, who's also a singer, dancer, and actor. But on Flip It Like Disick, she'll mostly be embracing her design side and pulling from her years of experience as the CEO of her company W Ford Interiors. Her E! bio says she's designed homes for all kinds of celebs, including rock stars and Olympians. She leads an all-women team who help bring her design vision to fruition.