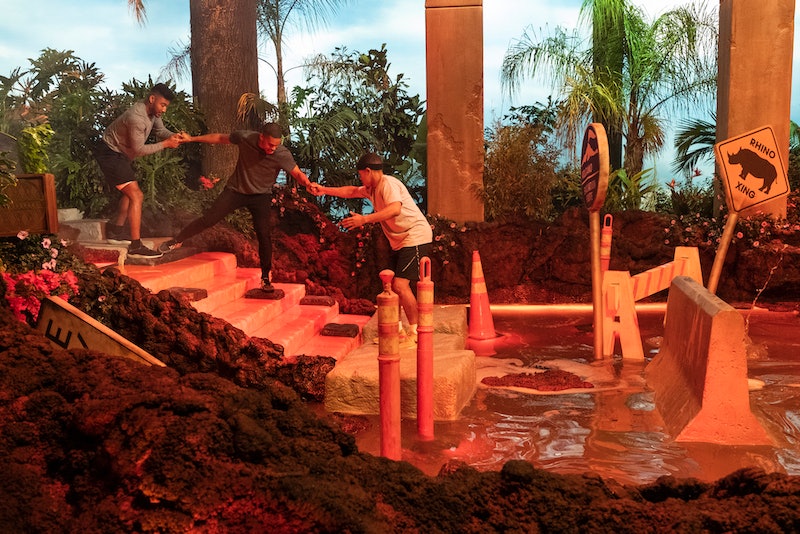 Picture this: celebrities in a spirited game of “The Floor is Lava.” The creators of Netflix’s Floor is Lava teased a possible celebrity edition of the game show inspired by the childhood staple “The Floor is Lava.” Irad Eyal and Megan McGrath dished on the series — which follows contestants who must traverse an obstacle course without falling into a pool of bubbling “lava” — in an interview with The Hollywood Reporter published on July 4. When the topic turned to a potential celebrity edition, the creators teased some famous names.

“We've been getting a lot of tweets and Instagram stories of celebrities watching it,” McGrath said. “Kristen Bell was watching with her family. We would love Kristen and Dax [Shepard].” McGrath added, “Jesse Tyler Ferguson posted about it on Twitter and we all were fangirling out over here on our text message threads about that. Lin-Manuel Miranda tweeted about it. I think that was one of the ones that sent everybody into a tizzy on our end." She said, "Yeah, there are a ton of celebrities who are reaching out.” Eyal added, “The most important thing, though, is it's not enough to just be a celebrity. You now have to put together the team.”

“You're going to have to think, ‘Who are the other two people that I'm going to trust out on the lava field?’” Eyal continued. “We're looking for teams of three that are really committed to it.”

Hosted by racing analyst Rutledge Wood, the series follows three teams competing against each other for a $10,000 prize. Of course, the floor isn’t actual lava — but Eyal and McGrath won’t dish on what the watery red substance really is. “It's a proprietary blend,” McGrath told THR. “I can't tell you what it is.” Eyal added, “The reason we're being so secretive about it is because it really did take a long time to nail this down…. it took a long time to figure out exactly how [to] make this thing bubble, flow, be slippery, be viscous in the right way, and also be safe that people can be submerged in it for minutes at a time, hours at a time, whatever it is, and come out safely.”

As McGrath noted, Ferguson declared his love for the show on Twitter. “Oh no I think I’m obsessed with The Floor is Lava…,” he tweeted on June 28. “have you watched this? It’s ridiculous.” Miranda also tweeted about it on June 25 and wrote, “Floor is lava? Floor is lava.” It’s still too soon to know if Floor is Lava will return for a second season, but fans will no doubt be manifesting these celebrity cameos in the meantime.