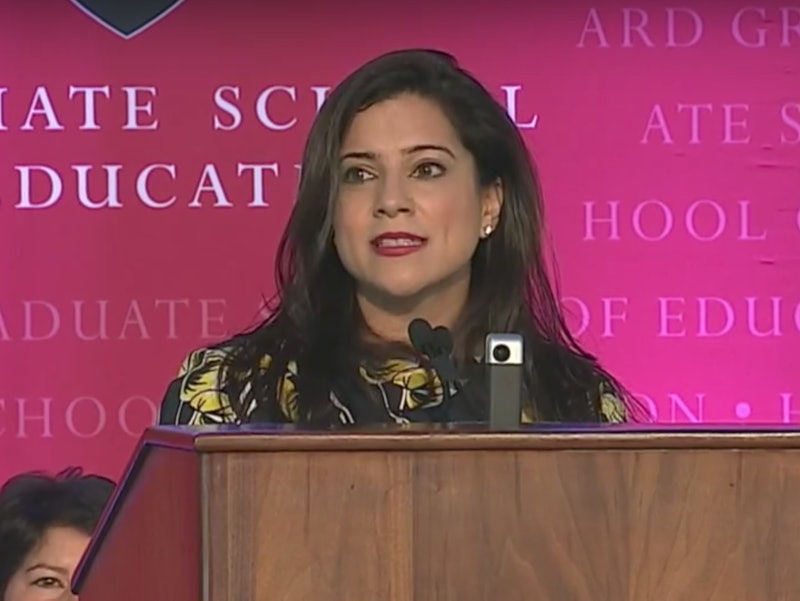 Last week, Reshma Saujani, the founder of Girls Who Code, spoke at the convocation of the Harvard Graduate School of Education. In her speech, Saujani delivered some unexpected advice for raising successful women: Teach girls to be brave, not perfect.

Saujani is a lawyer and activist, who founded Girls Who Code, a nonprofit organization dedicated to increasing the presence of women in tech, in 2012. In the years since, Girls Who Code has taught 40,000 girls across the country to code.

In her Harvard speech, Saujani asked a key question: “Why aren’t there more women in power?” She argued that, at least in part, it’s a cultural issue. We don’t raise boys and girls with the same set of ideals. “In our society, we train our boys to be brave, to throw caution to the wind, and follow their passions,” she said. “And we train our girls to be perfect, to please, and play it safe, to follow the rules, and to always get straight As. The result? Girls are kicking butt in the classroom, but falling behind in the real world.”

The problem, she argued, is that, as an adult, being “perfect” doesn’t lead to success. “Success is a product of bravery, not perfection,” Saujani explained.

Saujani shared her own history as proof. She recounted applying three times to Yale Law School before getting in, and said that the years she spent doggedly pursuing what she thought was the “perfect” résumé at Yale could have been used to “actually make a difference in the world.” She said that it was when she stopped being careful and instead pursued her dreams — by running for office, by founding a nonprofit — that she found fulfillment. “Bravery, not perfection, was the key that has unlocked every door that I have walked through since,” she said.

Saujani has seen girls in Girls Who Code who struggle with the same pressures that she did. “The girls in our program, they’re brilliant. They’re talented. And they’re just as capable as the boys,” she said. “But they’re afraid of imperfection, of critical feedback, of trying something that they may not excel at. … They’re not taught to be brave, the way the boys are.”

She urged the audience of Education graduates,

If today’s adults can teach girls to be bold, and unafraid of failure, Saujani argued, “we will unleash the most badass generation of women leaders the world has ever seen.”