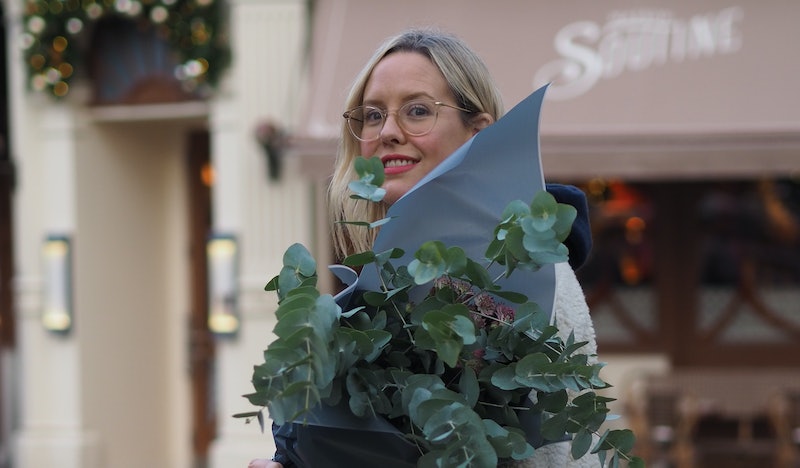 Freelance fashion stylist Alex Stedman has been weaving financial frankness into her blog The Frugality since its launch in 2012. Credit debt, plus a poorly paid job, and the resulting desire to “take the stigma out of not having very much money,” made her get real about her financial ins and outs with readers.

Fast forward a few years and she's still pushing for conversations around money that everyone can get involved in, no matter their financial situation, and leaning into the juxtaposition between the apparently glossy life of an influencer and her behind-the-scenes reality (see: batch-cooking meals on a portable hob.) And although Stedman acknowledges money has becoming something of a hot topic over the past year or so, as she wrote in an article for i-News: "I’m not doing it because money is currently a ‘trendy’ topic, I do it because we can’t afford to live another way right now."

I chatted to Steadman about why she believes there’s no such thing as a good or bad relationship to money and how she supports herself financially through times of increased spending like Christmas and holidays.

Aimée Grant Cumberbatch: Do you think money and finances are still taboo topics and, if so, how do you think we can get more people talking about them?

Alex Stedman: I definitely think so. It's interesting because when I speak to people about money, you either get people that close up, or people who just want to talk and talk. Because we don't talk about it enough so I suppose some people are just desperate. From writing my experiences on my site, I really noticed people like to hear other people's experiences. It might echo with theirs, it might not, but it's just interesting reading other people's experiences and I think that's how we get people to talk about it and make it feel not such a scary subject.

I find that people think they're bad with money. And I don't really subscribe to that. I feel you don't have to be good or bad with your money, it's more just knowing your money and that's the first step really.

AGC: You worked with NatWest on a money diary that was specifically for Christmas. What was that experience like?

AS: I've noted things down before but not in such a busy period. I haven't thought a lot about contactless payments, things like [everyday] travel. I kind of bundle them up as just a general expense but when you put it down every day you realise. You think, "Oh I haven't spent money today," but actually, you have. Even sometimes without thinking about it. I think a lot of people think it will be a horrible scary thing, but actually I was quite proud of what I'd spent money on. I felt I'd had a really great few weeks and [that] I've come a long way from when I first started in the industry and didn't have money to do all the lovely things I've done over the Christmas period. So it can be a really nice experience as well.

It [also] doesn't have to be a big reveal moment where you think "I have to address everything." You might think, "Oh I spent more on that day than I usually would and I might need to think about making a few more presents next year," but it doesn't have to be a huge overhaul. I think small tweaks are definitely where you start. Little things like having the courage to say: "so you want to just come over to my house for dinner tonight instead of going out?" I think knowing your finances, as well your relationship with your friends, is really important and bringing that together and just being honest. Just saying, "You know what? It's a bit too close to pay day. Let's just have a bowl of pasta instead." I think people are a bit scared to do that.

AGC: How would you say that you can kind of plan for periods like Christmas or holidays and that we know are coming up where our spending is likely to increase?

AS: We have always started our gift sorting in October/November, so by the time I did this money diary, I was actually just finishing off the last five people.

[It's been] a very methodical tick-off, which sounds very unromantic, but still makes a lovely Christmas. I think just sticking to your plan. We're only doing one present each this year, which made a lot of difference. I realised in years before, I was buying little things here and there. And then on Christmas day I'd have like seven presents for one person. So actually sticking to just one more meaningful gift really cut down on expenditure. Plus it also cut down on how much stuff we were bringing back because I asked family to do that for us. I think everyone was a bit relieved when we said it.

For holidays, generally we try and book in sections. So we'll buy the flights or the train, or book two nights in a hotel one month, and then another month we'll book the train to get from one place to another, and then we'll book another night in an Airbnb another month. We try and plan it six to eight months in advance and then we start saving spending money. Then towards the end, I'll probably do a car boot sale or something like that. By the time we've gone we've got it all saved and it's all paid for, and it feels like you can really enjoy yourself.

AGC: You've spoken before about the stigma around saying you need to save or you're struggling with money. What do you think we can do to help make it easier for people to admit those things?

AS: Just breaking down those barriers. I started my blog because I didn't want being frugal to be seen as cheap or stingy. I think we've got this association with those words and actually there's nothing wrong with knowing your money and knowing what you can afford. There's nothing wrong with earning less than someone else. We all have different careers and different paths. As long as you know your money. Rather than calling people cheap, we need to praise people for understanding their money and knowing how much they have left in their bank account, because not many people do.

AGC: How do you think social media has affected those kind of conversations?

AS: For a few years there was definitely kind of a glossy period of Instagram where everyone was showing all these new things and their achievements. And it's obviously great to celebrate achievements, but I think it's really important to show a realer side as well. On Instagram, you can choose to follow a different person. I would really encourage that. Think in a different way, assess how social media makes you feel, and then adapt who you follow. Now I follow all the people who are really empowering. And, also, from following quite a few kind of money accounts I realise that I know more than I thought I did. I thought that the money conversation didn't really involve me, because I didn't have much of it. I definitely think I had been at a period of denial in my life, earlier. And then when you speak to people that are financial advisors and they break it down, you think "actually I do know that, it's not actually that hard." Once you've kicked down a lot of the language barriers, it definitely demystifies it. I think that's what's good about social media, it really kind of breaks down for regular people like us.

AGC: There's so much variety out there that you can probably also tailor it to your specific issue around money. So if it's reducing spending, or increasing saving, or budgeting, or getting out of debt, there are social media accounts for each specific issue.

AS: Or people still really in debt and talking about the emotional side of it and how they got into it and how they're going to get out of it. I think that's really interesting. Pre-social media, people would never talk about money and people with debt would feel like a failure. But actually, owning that and putting a positive spin [on it] and sharing it, I think it's really empowering and that can really help so many people.

AGC: What does good relationship with money look like to you?

AS: It took me a long time to get there, but I know exactly what my outgoings are and what my incomings are. I think that's the most important thing for me. It's not about having loads of money in savings at the moment. But I know how much goes out and goes in and less goes out than in. I know how many direct debits I have and I know they come out from a certain account and that covers that. There's always, however small, a little pot of contingency somewhere [so I know] that if we have a burst pipe or need to get pest control in, that I could do that. Maybe not immediately but in a couple weeks on pay day, we can sort that. And I think that's enough for me. We have a nice life, we go out to Nando's occasionally. We don't do anything fancy but we're in a very comfortable position, and I think that's the most important thing for me.

AGC: What would you say to somebody who feels that getting to a good place with money is out of reach?

AS: I'd say that the money conversation does involve you, don't think that it doesn't. I remember [in the past] thinking there's no point, I'm never gonna get out of this. Then when I realised that that my wage wasn't really going up significantly, I just felt like I have to now, there's no getting away from it. And you know, there's nothing wrong with ordering the side dish at dinner. Just do what you have to do. You don't have to go along with everything, and having that confidence and knowledge in yourself and know that actually one day you will be so much more confident in that spending.

AGC: What three saving tips would you give to a friend if they asked?

1. I'd say work out how much your tax is. I usually overestimate to make sure I have enough. When it comes in just save it, it's not your money.

2. I always save first. I don't wait till the end of the month to scrabble around, it's always in there.

3. I also think we have this perception that savings has to be this pot of thousands of pounds or £500 a month. It doesn't. It can start so small. I think even if I have £1.20 in my bank account at the end of the month before payday, I put that aside. Because it can go somewhere ... There's loads of ways to save here and there and it does all add up.

AGC: So don't put yourself off saving by telling yourself there has to be loads and loads for it to be worth it?

AS: Yeah or wait to have money to save. If I'd started 15 years ago, I'd probably have a nice little pot by now.

Alex has been working in partnership with NatWest to create a money diary to help start a conversation around how everyone can become more financially confident.