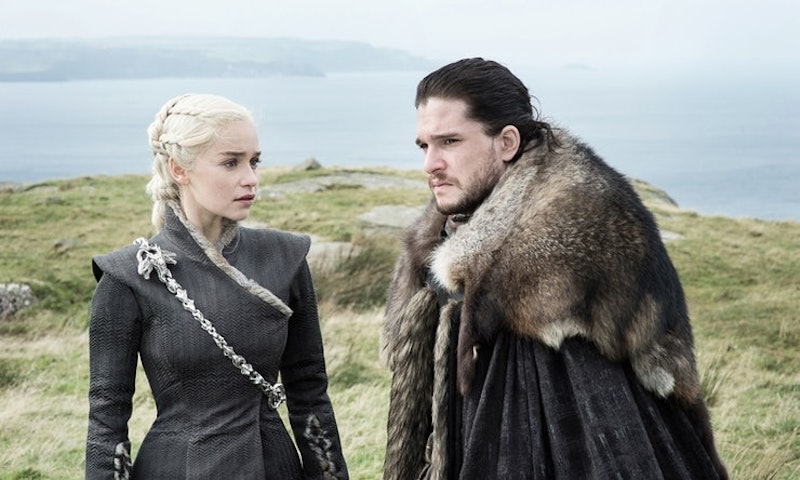 A Song of Ice and Fire, along with its TV adaptation, Game of Thrones, is a fantasy series. You can tell because there are fire-breathing dragons, zombie-making ice people, and all of the women have perfectly shaved armpits despite the fact that it's the faux middle ages. But, while George R.R. Martin's epic might have all the trappings of a whimsical, violent fantasy world, the actual plot of the series is based in reality. As Martin himself puts it, he plucks many of his plots and characters from history and then he "turns it up to eleven" and "changes the color from red to purple" to write the books' iconic scenes. So here's a look at the bloody, twisted, and unfortunately true history that inspired A Song of Ice and Fire and Game of Thrones.

If we wanted to go through every last moment of the books and which historical events they correspond to, of course, we'd be here all night. The series is already longer than The Lord of the Rings and the Bible combined, and George has only written five out of seven books so far. Westeros is pretty clearly based on Medieval Britain (albeit a beefed up, much larger and sexier Britain), and British history is not known for being short or simple.

For now, let's just focus on two huge historical influences: Ancient England and the Wars of the Roses.

Back in Ye Olden Times (around 2000 BCE), the British Isles were populated by... someone. According to British mythology, the place was crawling with elves and giants and whatnot, but we actually have very little information about the original people of England. They mostly seemed to hang out, building Stonehenge and various other henges, until the Celts came from across the Narrow Sea—I mean, the English Channel—to wipe them out with the cutting edge technology of iron weapons.

This is pretty darn close to the story of the First Men rolling up to Westeros and driving out the mysterious Children of the Forest. The Starks and Ironborn and other "First Men" families of Westeros worship Old Gods of the forest and the sea, much like early, nature-based Celtic religions. They've also got the Viking toughness of some of the later Nordic invaders of England, who came to pillage and then ended up staying to raise families, talk about winter, and carve runes on rocks.

The next major invasion came from way down south: the Romans (after a few false starts) finally got their act together and conquered England in 43 CE—at least, most of it. They expanded their border all the way up to Northern England, near the border of modern Scotland and then figured... eh, the tribes up in the far north are too scary, let's just build a giant wall to keep them out.

The wall was known as Hadrian's Wall, and it stretched from coast to coast. It wasn't magical or made of ice, but the men who served at the wall were low-ranking and forbidden to take wives or hold lands. Men from all across the Roman Empire were sent to the wall to serve out the rest of their lives defending the northern edge of the world from the Wildling tribes that lay beyond.

In the real world, the Roman hold on Britain collapsed in 410 C.E., and the Angles and the Saxons began pouring into England from Europe. The Anglo-Saxons shoved all the Celts into Ireland, Scotland, and Wales, and set up shop in England, eventually settling down into Seven Kingdoms.

A Song of Ice and Fire remixes all of these invasions, but the Angles seem quite similar to the Andals of Westeros, who invaded from Essos and settled down into (wait for it) Seven Kingdoms.

There were a bunch of Viking invasions over the next couple of centuries in the British Isles, but the Seven Kingdoms of England mostly held it together, until...

OK, not really. But in real life, William the Conqueror, a bastard Duke of Normandy (in Northern France) decided it might be nice to conquer England and rule over all Seven Kingdoms. In 1066, he crossed the sea with one hell of an army and did just that. In A Song of Ice and Fire, it's mostly the same story, except with Aegon the Conqueror and his sister-wives and their three dragons taking over Westeros and establishing the Targaryen Dynasty.

William the Conqueror was so successful in his conquest of England that the current Queen Elizabeth II of England is his 22X Great-Granddaughter. That one family is still in control, almost a thousand years later. But that thousand years has seen quite a lot of family drama...

The Wars of the Roses

In 1455, two families started a decades-long wars for control of England. It starred the Yorks with their white rose sigil, and the Lancasters with their red rose.

The characters of A Song of Ice and Fire don't perfectly match up with the historical figures of the Wars of the Roses, of course. Brienne of Tarth is closer to the armored lady Joan of Arc, who lived slightly earlier, and both Cersei and the later Queen Anne Boleyn were accused of sleeping with their brothers. But yeah, the Yorks are pretty much the Starks and the Lancasters are (spoiler alert) the Lannisters.

The Yorks and Lancasters were actually related, both branches of the royal family. The trouble started when the (mad?) King Richard II ascended to the throne... ahead of his deceased older brother's sons. Richard's nephews were none too pleased with that, and also Richard II was generally boring and nobody liked him.

So Richard's cousin Henry IV, a Lancaster, got all the people riled up about how much the "Mad" King Richard sucks, and then deposed him and took over the throne himself. Henry's son Henry succeeded him. Much like Robert Baratheon, Henry V was a popular warrior and party dude, but he died at war, leaving behind an infant son named (you guessed it) Henry.

Lil' Henry VI was a Tommen-like pushover, and he was soon bullied into marrying the hot and scheming Margaret of Anjou. Margaret was like a terrifying mash-up of Margaery Tyrell and Cersei Lannister. As Henry VI started to lose his mind, becoming an actual Mad King, Margaret would take over ruling the country for him, and mismanage the hell out of the war against France.

Margaret also didn't care for her husband's BFF, the serious Richard of York, who came back to court from the North (well, from Ireland) to be made "Protector of the Realm," which was basically the real life version of the "Hand of the King."

York whined a lot that Margaret was doing a terrible job at running the country, and most people agreed with him. So Margaret convinced the king to fire Ned Stark/Richard York, who then raised an army and came charging back into town to demand the throne. Instead of a getting a crown, though, his head ended up on a pike when the Queen's men killed him in battle.

Richard York's son, Edward, pulled a total Robb Stark and claimed that he was now king. He also turned out to be an A+ military genius, thrashing Henry VI's armies on the battlefield. Henry VI was defeated, and Margaret fled the country with their cruel son, also named Edward (yeah, everyone in English history basically has one of three names).

BUT THEN Edward York pulled another Robb Stark, and backed out of his betrothal in order to secretly marry for *love*. This led to mass warfare and the death of young Edward Lancaster, but Edward York finally secured the throne again until his death.

Except, Edward York's younger brother, Richard III, stepped in as soon as Edward died and claimed that, because Edward had married in secret, his kids weren't legit. Richard took the throne and had the two lil' princes locked up in the Tower of London, and they were never heard from again.

Richard III is a definite influence on Stannis, in that he wants to discredit his nephews and ruin everyone's day. But, there's also a lot of evidence that Richard III wasn't a bad dude: people just hated him because he was born slightly hunchbacked. The propaganda made him out to be some kind of evil, twisted monster who murdered his own nephews.

Richard III didn't reign for long, though, because a secret royal was plotting an invasion from across the sea...

Henry Tudor was not a dragon queen, but he did flee England as a kid after his royal dad, a Lancaster, was killed in a rebellion. With everyone hating on King Richard III, Henry Tudor began raising support for his claim across the sea in far off France. He teamed up with all sorts of oddballs, like Scots and Welshmen, who felt ignored or persecuted by English rule.

In 1485, with his (unfortunately dragon-less) army, Henry sailed for England and defeated Richard's forces. He then pulled a Daenerys and got it on with his distant relative, Elizabeth York, older sister of the missing princes. The marriage between a Lancaster and a York finally combined the red and white roses, ending the war and starting the Tudor line.

Will George end his own political saga with a swift conquest and a (mostly) happy marriage? Probably not. We can likely count on a whole lot more zombies and dragons (and dragon zombies) before we reach the bitter end of A Song of Ice and Fire. But I think we can all agree that GRRM has indeed taken the bare bones of English history and "turned it up to eleven" to create one of the most complex fantasy epics of all time.