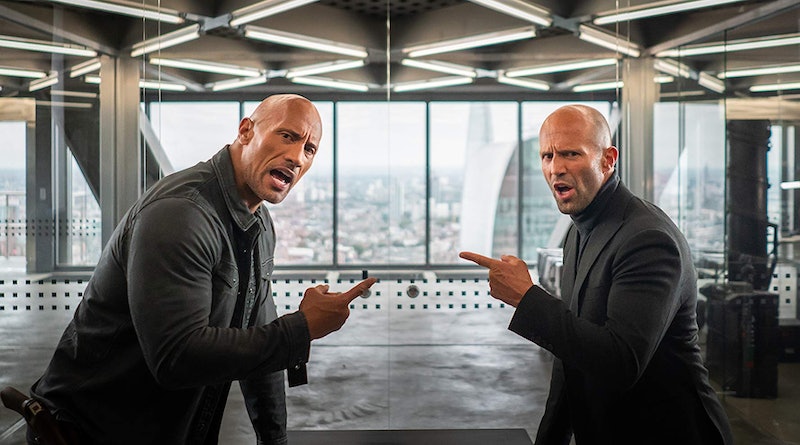 The Fast & Furious spinoff film Hobbs & Shaw packs in just as much comedy as it does action. Aside from the playful slapstick fun and hilarious back-and-forth between hostile frenemies Luke Hobbs (Dwayne "The Rock" Johnson) and Deckard Shaw (Jason Statham), the film also includes some playful pop culture references, some of which were apparently improvised. The Game of Thrones joke in Hobbs & Shaw, for example, came from a big star who makes a surprise cameo in the film.

Major spoilers ahead! The jokes about the recently completed HBO series were delivered by a new addition to the Fast family, Ryan Reynolds, who plays CIA Agent Locke. Locke, who is clearly a disappointed GoT fan, makes the first few references to the show when he sits down with Hobbs at a diner — disrupting the former federal agent's meal with his young daughter — as he tries to recruit him for the mission to retrieve a deathly virus that threatens to infect the world before superhuman soldier Brixton (Idris Elba) gets to it first. In the scene, Hobbs also quotes the famous line, "You know nothing, Jon Snow."

In an interview with RadioTimes.com, Hobbs & Shaw and Deadpool 2 director David Leitch said that the GoT references were a work of "Ryan’s twisted brain." He continued, "When I asked him to do the scene in the pancake house [at the beginning of the film] and to be this character Locke who gives the exposition of the virus, I asked him to help jazz it up. Ryan always has a lot of great ideas, and he wanted to riff on Game of Thrones, obviously it’s in the pop zeitgeist and it’s such an iconic show, and he’s like ‘let’s go after Game of Thrones for fun.'"

From Reynold's first scene all the way to the film's post-credits scene, Hobbs & Shaw milks the reference. During the showdown between Hobbs and his Samoan brothers and Brixton and his crew, there's a play that will remind GoT fans of a huge scene from this past season. Shaw circles the battleground with fire, so the enemy isn't able to retreat, just as Melisandre (Carice van Houten) lit the wooden barricade surrounding Winterfell on fire to ward off the White Walkers in the third episode of season 8, "The Long Night." This can't be a direct reference since Hobbs & Shaw was filmed before Season 8 aired, but it's still an interesting coincidence.

And in the final scene after the credits roll, Locke questions the finale, particularly Jon Snow's ending. “He had sex with his aunt and then killed her,” he tells Hobbs incredulously over the phone.

Leitch explained to RadioTimes.com, “When we finished editing the movie and we brought him back for the coda, we were looking at things we could sort of dredge up from the original scene and what could be paid off, and that was one of them and he said,’ let’s find some Game of Thrones stuff’. And by that time, the finale had come out, and it just felt like the right joke at the right time.”

With Reynolds's comedic stylings making their way to the Fast & Furious film franchise, there's a chance for more of his brand of humor to make it into future films. The Rock has teased on Twitter that Reynolds's Locke, and Jumanji co-star Kevin Hart's US Air Marshal Dinkley will be joining Hobbs and Shaw in a potential next film. He wrote, "Stick around kids for our @HobbsAndShaw post credit scenes. It’ll give ya some insight into the 'future team.'" With those actors on board, you can expect that this film won't be the last to make jokes out of timely pop culture references.