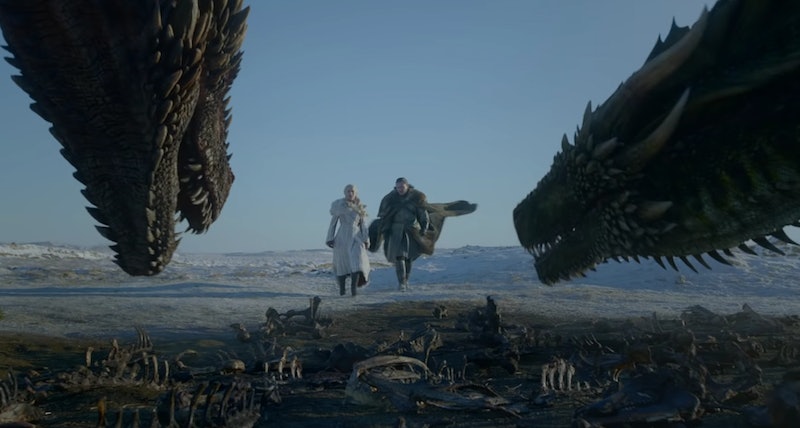 On Tuesday, March 5, HBO released the first full-length trailer for Game of Thrones Season 8, officially kicking off the beginning of the end of the beloved fantasy series. The trailer for Season 8 seems to pick up where Season 7 left off all the way back in August 2017, and includes Daenerys Targaryen (Emilia Clarke) and Jon Snow (Kit Harington) sharing some intriguing scenes together. One of the most exciting shots from the Game of Thrones Season 8 trailer has fans convinced Jon Snow is going to ride a dragon. The scene shows Daenerys and Jon Snow approaching Dany's two dragons. Aside from this shot, which features a gorgeous framing of the hottest GoT ship, the image also shows Jon approaching one of the dragons with a purpose that has fans thinking they are both going to ride their own dragons this season.

Fans of the series can't deny that the new trailer frames Daenerys and Jon as a couple, so the many theories about Jon and Dany's relationship will be very relevant for the eighth and final season, which is exciting on its own. But right now, people mostly want to know if Jon will ride on those gorgeous dragons in Season 8, which premieres on April 14. As Vanity Fair discussed at the end of Season 7, some have believed that only Daenerys can ride her dragons — she is known as the Mother of Dragons for a reason — which would make Jon taking control of one of the beasts a total game-changer.

Now, other people had ridden Targaryen's dragons, but only while on the animal's back with the Mother of Dragons controlling the flight. In Season 7's episode, "Eastwatch," Jon Snow had his first reaction with the mystical creatures where he pet Drogon, much to viewers' surprise. Most people who'd interacted with the dragons ended up getting scorched fiery breath. Drogon, however, let Snow pet him as if he were a cat, which was new for Game of Thrones fans.

In a video of Harington that Clarke posted on Instagram in August 2017, when the seventh season was airing, the actor who plays Dany joked about how Jon Snow's interaction with the dragon could get to the character's head. "I mean, JEEEZE, one pet of a dragon and he thinks he's one of them," Clarke captioned the video of Harington, in costume, flapping his wings like a dragon.

Based on the way that the Season 8 trailer shows Daenarys and Jon Snow walking up to the two dragons left after the Night King captured Viserion seems to hint at a future of Jon Snow riding one of them on his own alongside the Mother of Dragons. Theories abound on Twitter about what it might mean that Jon Snow could ride a dragon, especially if he rides Rhaegal, the dragon named after Daenerys' brother and Jon Snow's nearly confirmed father, Rhaegar Targaryen.

Jon Snow riding a dragon in Season 8 wouldn't just confirm his Targaryen heritage — since the family was known for mastering art dragon riding, according to Vanity Fair — but it could also highlight another unsolved mystery of the series, which is the prophecy of "the dragon has three heads," from Season 2. In Season 2's tenth episode, Daenarys visited the House of the Undying in Qarth, where she has a vision of her brother, Rhaegar, referring to his son, presumably Jon Snow, as "the prince that was promised." Then, in the same scene, Rhaegar says, "the dragon has three heads," directly to Daenarys.

According to Screen Rant, the three-headed dragon prophecy might refer to Aegon Targaryen and his two sisters, Rhaenys and Visenya, who conquered Westeros together before, and how three new Targaryens might need to join together to do the same again now. Then again, since third dragon, Viserion, has been turned into an ice dragon, it would make sense if only two Targaryens end up conquering Westeros this time around. Perhaps the end of GoT will show Dany and Jon riding off on Rhaegal and Drogon — the two remaining dragons — into the sunset together, but most likely it will be a lot gorier than that.