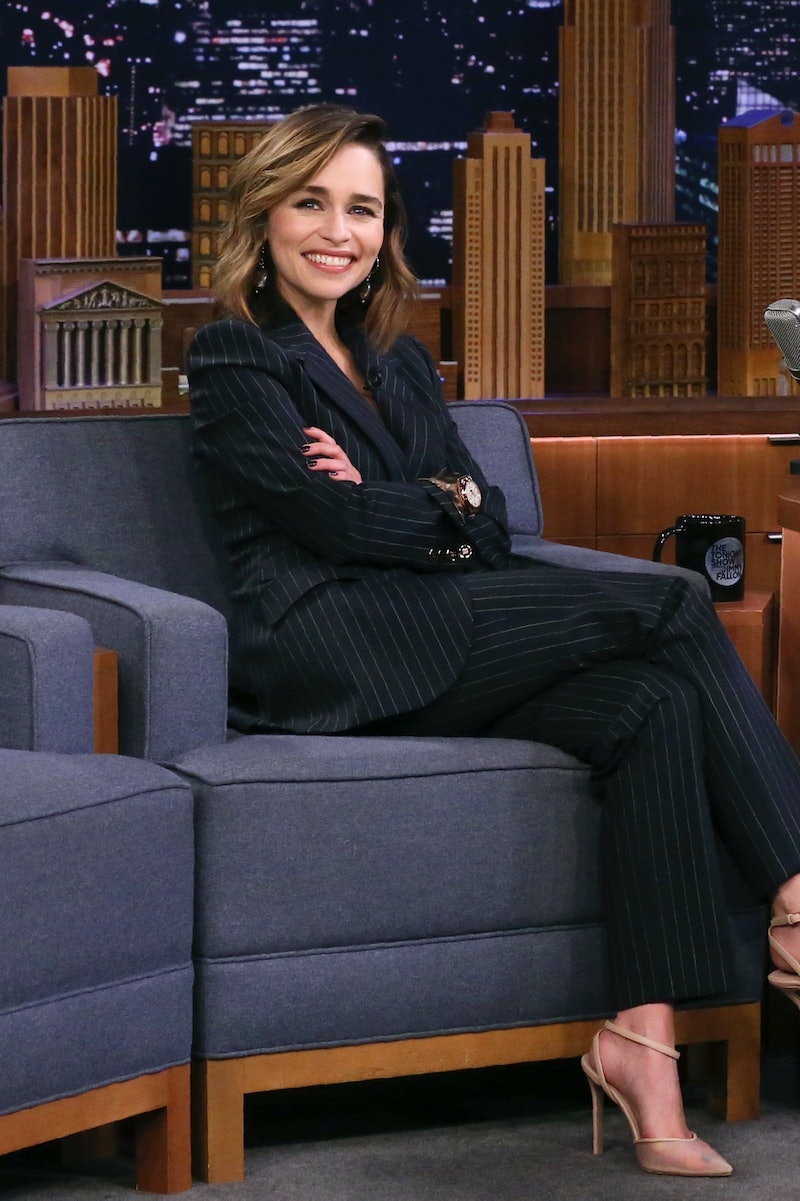 While Daenerys and Arya may have been fan-favorites, the true star of Game of Thrones was actually a coffee cup — specifically the mysterious Starbucks cup that accidentally appeared in the background of an episode in the HBO show's final season. Now, five months after the episode aired, fans finally know who caused coffee cup-gate, thanks to Emilia Clarke. Clarke revealed the Game of Thrones star responsible for the coffee cup and no, it's not her, despite co-star Sophie Turner previously trying to blame her.

While appearing on The Tonight Show Starring Jimmy Fallon on Wednesday, the host asked Clarke to comment on Turner's accusation, which she made on the same talk show back in May. While Clarke acknowledged she'd heard Turner's claim, she decided to name the actual culprit behind the cup: Conleth Hill, or as GoT fans may know him, the Spider. How fitting that the Master of Whisperers was the one keeping this secret from everyone.

According to Clarke, Hill recently made the confession during a recent pre-Emmys party. She recalled, "Conleth — who plays Varys, who's sitting next to me in that scene — he pulls me aside and he's like, 'Emilia, I gotta tell you something... The coffee cup is mine.'" He also apologized to Clarke, she said, since she'd been the one blamed.

Turner made the accusation against Clarke, half-jokingly, during her own appearance on Fallon's show. The host found a candid Instagram photo of Turner on set holding an identical cup and asked if she was behind the crime. "Let's clear this up," Turner said. "That's in a different scene, and also, we all have the same cups for all of our water and tea and everything, so I'm gonna just go with, I mean look who it's placed in front of. Emilia Clarke. She's the culprit."

Despite now proving herself innocent, Clarke did admit that one factor of Hill's confession could be a fluke. "He might have been drunk, but he said it, so I'm gonna take that," she said.

No matter who's actually responsible for the gaffe, it amused viewers and non-fans alike — and even HBO got in on the action. "The latte that appeared in the episode was a mistake," the network said in a statement. "Daenerys had ordered an herbal tea." The only thing that would've made the blooper even better is if the cup ended up winning the Iron Throne in the finale.