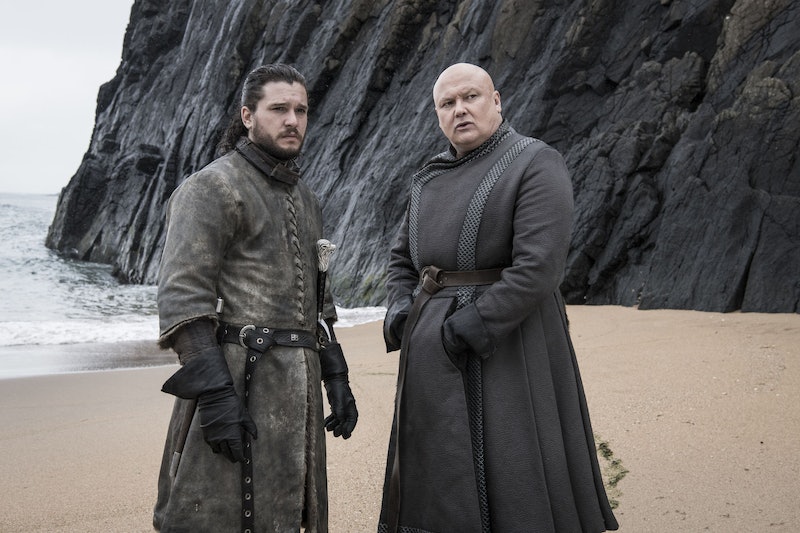 Spoilers ahead for Game of Thrones Season 8. After discovering that Jon Snow actually had the better claim to the Iron Throne, Dany begged him not to tell anyone. But now, his secret is out, and it looks like the Stark sisters aren't the only ones spreading the news. Game of Thrones Episode 5, titled "The Bells" opened with Varys writing a letter about Jon's parentage before his death. But who was it meant for? He burned the note just before being called to his execution.

In the fourth episode of Season 8, Tyrion (Peter Dinklage) shared the news that Jon (Kit Harington) is actually Aegon Targaryen, the rightful heir to the Iron Throne with Varys (Conleth Hill). Naturally, the Master of Whispers didn't keep the information to himself — as he said, now that a certain amount of people know, it's technically no longer a secret, and thus, ripe for spreading around the Seven Kingdoms in order to sow the seeds of support for having Jon on the Iron Throne.

And though Dany (Emilia Clarke) had Drogon burn Varys alive for betraying her — both by spreading the knowledge that Jon is the "true heir" to the Throne and by attempting to convince Jon to take the Throne from Dany — he tried to get the information out before his untimely demise. However, as Grey Worm (Jacob Anderson) made his way to arrest Varys, the Master of Secrets appeared to burn the slip of paper in which he explained Jon's claim to the Iron Throne, which means that the secret may have just died with him.

Varys' death has seemed like a foregone conclusion since Season 7, when Melisandre (Carice van Houten) told the Spider, "I will return, dear Spider, one last time. I have to die in this strange country… just like you." As she fulfilled her half of the prophecy, walking out into the snow after the Battle of Winterfell to die, it seemed inevitable that Varys' time alive was dwindling — hence, why he seemed prepared and resigned when the Unsullied came to execute him in his chambers.

Still, the fact that Varys had been aware of his impending death for some time means that he might have been able to leave some hints about Jon's heritage before his death. Yes, it appeared that he burned the letter explaining that Jon is "the true heir," but if there's one thing that fans know about Varys, it's that his whisper network is vast and quick. It's entirely possible that the Spider was in the midst of spreading the news when Grey Worm came for him, and burning the note was just a way to cover his tracks.

Varys had always stated that he served the "realm" rather than any particular ruler, and he echoed those statements to Jon, when he attempted to convince him to take the Throne form Dany. Clearly, his desire to keep an unfit leader from ruling Westeros had made him willing to betray many people and share all kinds of secrets. It's not unreasonable to assume that he may have managed to share the news that Jon is actually a Targaryen with his network.

Of course, considering the events of the episode — with Dany having Drogon burn most of King's Landing alive and the Unsullied and Dothraki taking out the people who survived — it probably no longer matters whether or not people know about Jon's secret. It seems as if she's willing to stake her claim to the Throne, no matter what it takes.