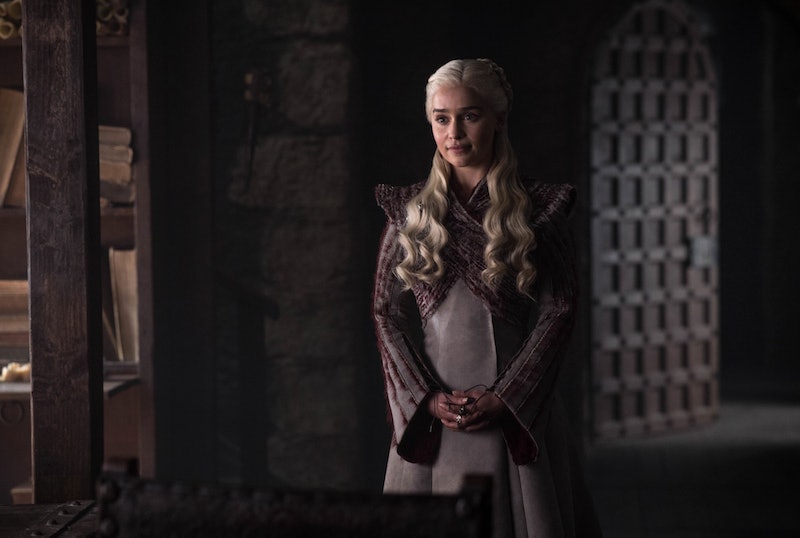 Call her Queen Daenerys Stormborn of the House Targ-cchiato. Or Breaker of Chai Lattes. Or the Mother of Decaf. Or all of the above. She does love a long title... and Starbucks, apparently? On Monday, May 6, HBO released a statement about the cup of coffee on Game of Thrones that took the Seven Kingdoms by storm, and it's about as enlightening as a day at the Citadel. According to the network, Dany should not have had that travel cup full of coffee at the post-Battle of Winterfell jamboree, but not for the reason you might think.

Around the 17-minute mark of the episode of Thrones that aired Sunday night, something that looked a heck of a lot like a hot cup of Starbucks coffee appeared on the Winterfell banquet table. HBO acknowledged that something was amiss in that scene where Daenerys Targaryen seemed to be seated before a modern-day latte, but again, the thing that was amiss might not be what you would expect. The statement reads,

"The latte that appeared in the episode was a mistake. Daenerys had ordered an herbal tea."

Ah. Well, that explains it. Dany was supposed to have a hot beverage from one of the biggest coffee chains, but not that hot beverage. ’Twas nothing more than ye olde Starbucks order mix up. Wow, Starbucks really is everywhere and in every century. No further questions.

Er, OK I do have one question: Where do you think the Winterfell Starbucks is located? My guess would be the Winterfell crypts. You've got to keep those coffee beans and Frappuccino syrups and those sous vide egg bites safe, and there is no place safer than the crypts, right? Right.

The day after Coffeegate happened, GoT executive producer Bernie Caulfield addressed the hullabaloo over the beverage on WNYC's All of It. She said,

"I can’t believe, I mean, our on-set prop people and decorators are so, you know, so on it 1,000 percent. I just honestly can’t, I’m like is that really, because nowadays you can’t believe what you see cause people can put things into, you know, into a photo that really doesn’t exist. But I guess maybe it was there, I’m not sure. But, yeah. We’re sorry!"

And then she added, “Westeros was the first place to actually, you know, have Starbucks, and it’s a little known fact." Well, update the history books, because it looks like the first Starbucks was not at Pike Place Market in Seattle after all, but somewhere on the continent of Westeros.

Starbucks also had something to say about Dany's beverage choice. "TBH we're surprised she didn't order a Dragon Drink," the coffee giant's Twitter account wrote Monday, making reference to the new menu item that is made not of dragons, but of dragonfruit.

Maybe the Winterfell Starbucks was out of coconut milk? Or hey, maybe Dany just wasn't in the mood for an ice cold beverage with the word "dragon" in the name after watching her child-turned-ice demon dragon explode into a billion shards of ice.