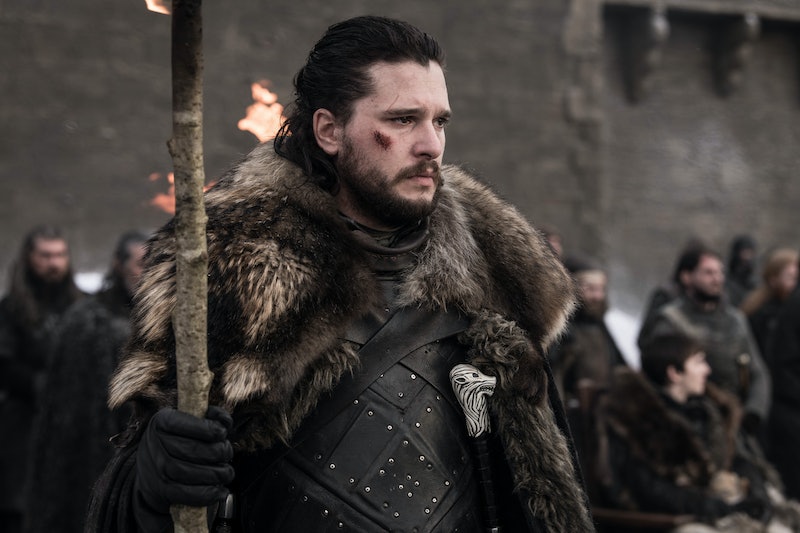 If there's one thing that both A Song of Ice and Fire and HBO's Game of Thrones have in common, it's that no character is ever completely safe. Ned Stark, the freaking protagonist of the whole story, gets his dang head chopped off at the end of book one. King Robb spends chapters and chapters planning his elaborate battle strategy before getting murdered at his uncle's wedding reception. Baby Viserion, the least popular dragon, is unceremoniously iced by Evil Jack Frost. Jon Snow is briefly offed by his co-workers, before being conveniently resurrected by his local fire witch. (Spoilers for Game of Thrones Season 8 ahead) And Cersei and Jamie died in each other's arms in the second-to-last episode of the season, which means that neither of them will claim the Iron Throne.

So does anyone truly have plot armor in this world? Probably not. But is that going to stop us from ignoring all our real world obligations in order to speculate about fictional characters deaths on the internet? No! Especially since we know who was supposed to make it to the end of the series, according to George R.R. Martin's original pitch for his books.

Of course, a lot has changed since GRRM first put pen to paper. The Game of Thrones books were originally supposed to be a trilogy. (Lol.) Sansa was supposed to marry Joffrey, have his baby, and betray house Stark. (Hell no.) Tyrion and Jon Snow were both supposed to fall madly in love with Arya Stark. (Oh my god NO.)

But the major plot points were already in place: The Starks and their wolves contend with snow zombies in the north while Dany and her horse friends hang out with dragons in the east, and everyone fights over a metal chair in the south. And Martin had already decided which five characters make it out alive. Here's what his original Game of Thrones pitch said:

"Five central characters will make it through all three volumes, however, growing from children to adults and changing the world and themselves in the process. In a sense, my trilogy is almost a generational saga, telling the life stories of these five characters, three men and two women. The five key players are Tyrion Lannister, Daenerys Targaryen, and three of the children of Winterfell, Arya, Bran, and the bastard Jon Snow."

Now before you start freaking out, Sansa stans, let's remember that this was a very early pitch for the series. The story has shifted significantly. Sansa is no longer a traitor to her family and Arya is certainly not at the center of a love triangle with her brother. But are these five still going to live to see the spring? Here is my deeply scientific analysis of the survival chances for each of our "main" five:

Eh... he'll probably be fine? Where we left off in the books, Bran is just starting his training at Creepy Tree School, where he will presumably learn how to time travel, warg, and stare dramatically into the distance while contributing very little to the plot. He's the next Three Eyed Corvid, which is a raven in the show and a crow in the books. Hopefully that job title comes with enough weird tree magic to keep Bran alive in the books, even if his friends aren't so lucky.

TV Bran stands a pretty good chance of surviving, too, since that whole nasty Battle of Winterfell established that the Night King wanted him dead. Now that the Night King and Jamie are gone, Bran's life should be pretty secure. Of course, no one in this story is every truly safe, but I don't think too many people are holding their breath over Bran "I'm Going to Sit Quietly Under This Tree and Do Nothing Even Though I Have Unlimited Magical Powers" Stark.

Survival chances: 9.5/10. No one cares enough to kill him anymore.

Good luck to anyone foolish enough to try and kill Arya Freaking Stark. Book Arya is well on her way to becoming Westeros's number one kid assassin. TV Arya stabbed The Night King right in his creepy ice gut and then dumped her hot blacksmith boyfriend the very next day. She's a stone cold killing machine.

However. Both in the books and the show, Arya might be just a little too far gone to ever retire from assassinhood. She told The Hound that she is not planning on coming home from their revenge road trip to King's Landing. She puts her life on the line regularly, and she has no interest in ever settling down. She might not be a big fan of the God of Death, but she also might choose vengeance over survival when she arrives on Cersei's doorstep.

PLEASE just let us have Tyrion. Please! Look, I know TV Tyrion hasn't had a good zinger in approximately two seasons, but Peter Dinklage is still bringing a metric ton of charm to these last few episode of grim and poorly lit dragon battles. I think that book Tyrion is going to be just fine, because he and Sam are the two brainy author inserts and also Tyrion is the only person in the Westerosi government who seems to have a basic understanding of economics and/or ethics. Also book Tyrion is still on a quest to find his ex-wife and apologize to her for that one time that his dad forced her into prostitution.

I'm a little less confident about TV Tyrion, though. Bronn is wandering around with a crossbow, and he does not seem like a very responsible operator of firearms. Tyrion will probably survive to be the power behind whoever ends up on the throne... but a Tyrion death scene would give us one hell of a gut punch in the series finale.

Look, I like Dany as a character! I think the TV show hasn't done right by her arc! And book Dany still has plenty of time to turn things around. Right now she's stranded in the desert, tripping out on dehydration and rambling about how she's going to burn it all down. But she could still emerge as the thoughtful, kind ruler she truly wants to be.

But TV Dany... yikes. Her babies are dropping like (dragon)flies. Her advisers have turned against her because Jon's just so much more "electable." Her best friend has been brutally murdered in one of the show's most tone deaf twists. She is begging her nephew/boyfriend to just let her be queen, pretty please? She just went Mad Queen and is poised to go out in a blaze of instability.

You remember that one of Jon's main character traits is being mildly stupid, right? Right? But yeah, he's going to make it. Or if he does die, it'll be a big messy twist ending. Sure, yes, technically book Jon is dead at the moment... but we all know he's going to warg into Ghost and spend a few chapters Homeward Bounding until he pops back up as our heir to the Iron Chair. His secret parents represent the titular Fire and Ice, so it seems like he's going to be a pretty important dude.

TV Jon is everyone's top pick for Special King Boy, so chances are also good that he's going to "win" the whole entire "game" in the end. But then again... honorable Stark men don't fare all too well down south. And this show does love a last minute upset.