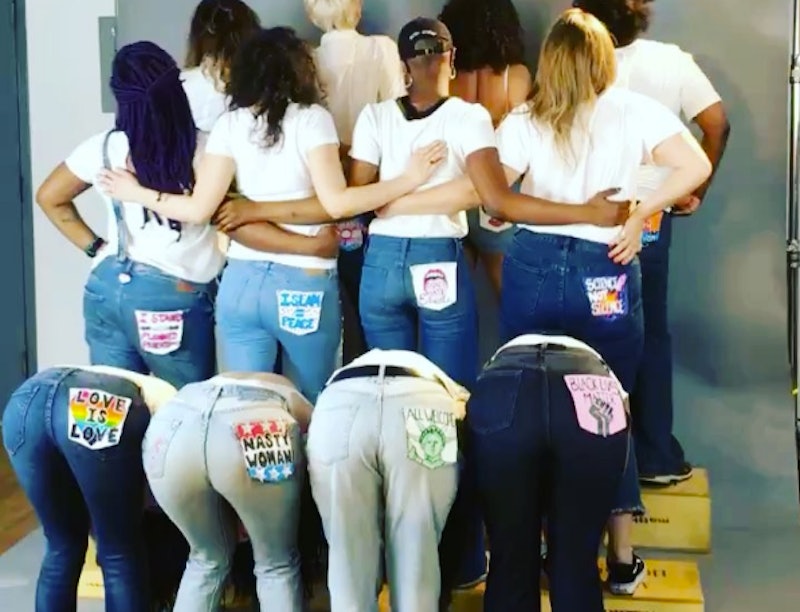 Ever since the election of President Donald Trump, more and more clothing brands have been stepping up to make apparel highlighting social issues. The trend was perhaps seen most noticeably with the "Nasty Woman" slogan, but goes even further via brands like Wildfang, which makes entire collections that benefit charities targeted by the Trump administration. But now there's a way to make your own protest attire to express your opinions and outlook. As Allure found, the Get Behind Us campaign is encouraging women to protest through DIY fashion.

The name of the campaign is a cheeky demand — as in, "Get Behind Us, now!" — that plays off the actual action participants are encouraged to take. The campaign centers around a small task: You make a patch for whatever cause you feel strongly about, and attach it to the back pocket of your jeans.

The message is simple: Get behind a cause by wearing it on your behind.

According to Allure, New York creatives Alicia Serrani, Charlie Gillette, Gabby Beans, and Isabella Serrani are behind the project. The campaign aims to not only spread awareness of oppression and social issues, but also celebrates the next generation of women-identifying artists. After all, the campaign is run by women creatives for women creatives.

The Get Behind Us Instagram page is a mix of women showing off their back jean pocket patches and art created by women-identifying artists. Patches created by participants pay tribute to social causes like Black Lives Matter, transgender equality, and just plain feminism overall.

Anything you're passionate about counts — as long as you get off your butt and make a statement.

"#GetBehindUs ... celebrates the multiplicity of women's experiences by empowering lady-identifying people & their allies to: Get off your butt! Get your activist jeans on! And support a cause that matters to you," a Instagram caption on the campaign's page reads.

Patches are a huge trend nowadays, but there's a specific reason that the back pocket works so well for this campaign. The women are hoping to combat the sexual gaze of men, according to Allure, which is pretty genius. It's a way to take back your booty, so to speak.

Plus, the campaign is extremely accessible for people of all budgets. You might not have $60 for a protest tee, but odds are you have some paper and markers laying around the house. Tac your DIY style onto a pair of jeans — any size, color, or fit will do — and you have yourself a political trend and fashion statement all in one.

As of right now, it's up to you to make your own patch. According to Allure, the women plan to eventually offer pre-made patches for supporters to sport, with proceeds of each purchase going toward an organization working on that particular issue. The publication reports that the campaign creators are hoping to eventually partner with organizations like Planned Parenthood, Black Lives Matter, and #NoDAPL to support their activist efforts.

The brand just announced that they will soon be partnering with Planned Parenthood of New York City for their first collab. You can keep up with all their future collaborations and plans on their Instagram page, which is the only online presence for the campaign.

In a time when activism is a necessity, it's nice to remember that every little bit counts. Of course, meaningful and tangible action like attending a protest, volunteering, and donating are still vital in this social climate. But a simple patch can make a supportive and inclusive statement — and it can let those around you know you are with them in struggle.