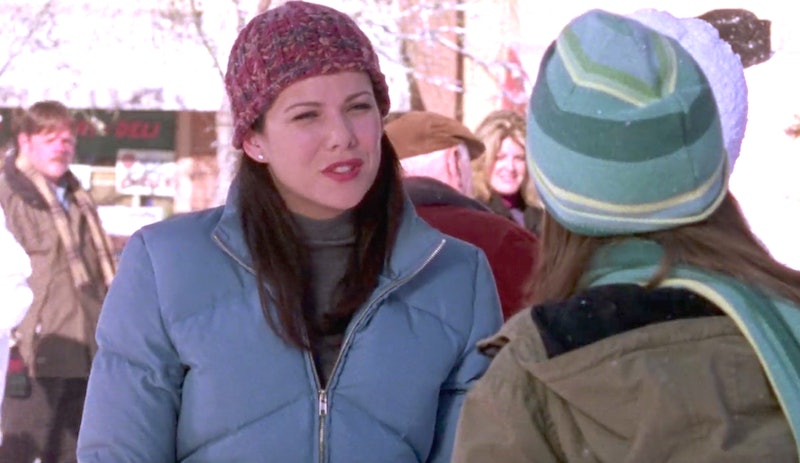 OK, you've got 44 minutes to change someone's engagement with pop culture. So, which Gilmore Girls episode should new fans watch if they want to understand exactly what makes the show so special? That's easy: Season 2's "The Bracebridge Dinner." Why? Well, for one thing, the life blood of the show is arguably not the mile-a-minute dialogue between Rory and Lorelai or the female leads' romantic rollercoaster ride or even rooting for the youngest Gilmore to make it into an Ivy League School. No, fans love Gilmore Girls for one key reason: namely, that Stars Hollow is an incredible utopia.

Stars Hollow is a small town, so city slicker viewers might be assuming that it should be dullsville. But, instead, up close, it looks like one of the most fun places on earth. All the townspeople seem to do aside from their jobs is participate in adorable group activities (group snowman making competition! Medieval themed wedding! Mass knit-a-thon!) and nowhere is this more obvious than in Season 2, Episode 10. This is the episode where Lorelai and Sookie have been organizing and cooking up a storm for a mass medieval-themed dinner, complete with pigeon pie, plum pudding, and a Squire (played by Jackson) sitting on a raised platform officiating the event.

Arguably, so many fans are addicted to the show because it offers them a chance to spend some time in a kinder, gentler world. You watch it because you want to live there, even just for a little bit. And what episode could make a better case for packing your bags and moving to Stars Hollow than this one?

Case in point: when the incoming guests are all snowed in and unable to make it to the Dragonfly, they don't even ask for a refund. Why would they? We're in the Gilmore Girls' world. This leads to what Lorelai describes as a mass slumber party, with the whole town attending for free. From this perspective, the episode is a shoo-in to convince that perverse friend who refuses to watch the show that it's the best thing since Netflix was invented.

But the episode is also a good introduction to the second season's guilty pleasure: the Rory-Jess-Dean love triangle.

Love triangles are cliche, but they're a mainstay of teen shows because they work at drawing the viewer in. As such, this episode is great for either reeling in another faithful fan or getting you involved in one of the fandom's greatest debates, even years after it was (sort of) settled. Either way, after Dean gets cajoled into taking a sleigh ride with his little sister and Jess overhears, he leaps into Rory's sleigh at the last second. What follows is him making a surprisingly solid case for the younger Gilmore to leave her sweet, totally devoted boyfriend for him, the guy who's been attempting a hackneyed impression of James Dean in Rebel Without A Cause for most of the time we've known him.

After clearing his name in a fight he was in, they drive past his crush's great snowwoman, and he asks Rory if she based it on Björk. A little while later, he asks, "Hey, what do you and Dean talk about?" and asks Rory if Dean would know who Björk was. The hipster posturing is a turn off, but his point seems valid when Rory struggles to give him an answer. "Everything," she says. "Just, everything, tons of stuff, whatever." Her vagueness is humiliating. We start to see the cracks in their relationship showing.

All the same, ultimately, the episode will still leave a first-timer with a cozy afterglow. That has a lot to do with the way the eccentricity of the characters is celebrated, rather than criticized. When Paris points out the historical anachronisms in the setting, such as her server's Fossil watch, Lorelai jests that "floggings will be administered." And when Kirk gets way too into staying in character as a medieval serving hand, Lorelai responds with outrageous I Love Lucy opinions until he cracks to offer his. She even smiles and pretends to agree with Mrs. Kim's argument that people have too much stuff.

"The Bracebridge Dinner" is the episode that most strongly depicts the show's warmth. Stars Hollow isn't just a lovely place to live, but a place where everyone is accepted for themselves, no matter how weird they are. And you've got to admit that makes for compelling television.