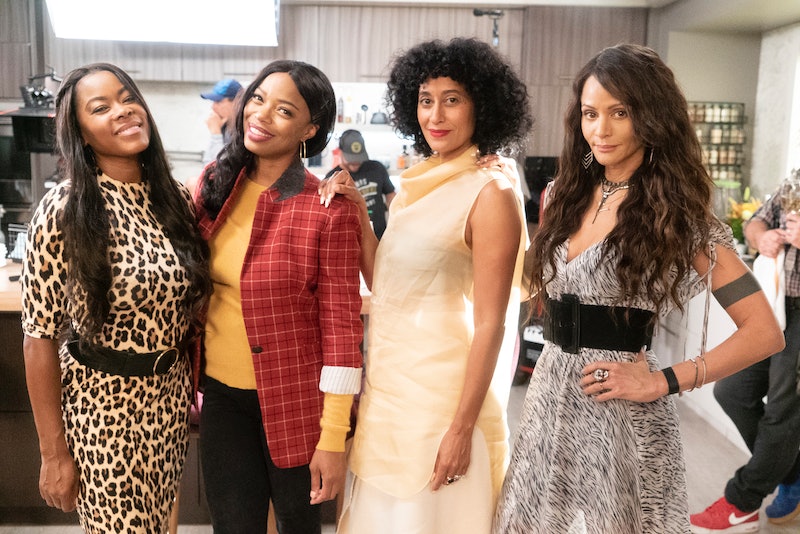 When Rainbow Johnson (Tracee Ellis Ross) needed to call in some "blackup" to help educate a "well-intentioned" feminist group of white women in the Oct. 8 Girlfriends reunion episode of ABC's black-ish, titled "Feminisn't," her reinforcements included four familiar faces. Bow's college friends included Ross' former costars: Golden Brooks, Jill Marie Jones, and Persia White, who played Maya, Toni, and Lynn, respectively, on Girlfriends. Seeing the women together again was a treat for fans of the UPN (and, later, CW) sitcom, which ran for eight seasons from 2000-2008 — but the episode was about way more than nostalgia.

The central issue of the latest black-ish installment was that feminism is far from a one size fits all concept, with the episode exploring the complexities of intersectional feminism from various generational, racial, and gender viewpoints. (Civil rights advocate and law professor Kimberlé Crenshaw is credited with coining the term "intersectional feminism" in 1989 to help describe the experiences of black women who not only face sexism, but systemic racism.) The role the former Girlfriends cast played, in particular, was to highlight "blind spots" associated with white feminism.

Although black-ish executive producer and showrunner Courtney Lilly explains to Bustle that this particular storyline preceded the Girlfriends cast's involvement, he acknowledges that he and the writers quickly "realized who we needed Bow's friends to be and we were really lucky to have the stars align to make it all work." After all, the subject matter is something that resonated with many of those involved in the show behind the scenes.

"It's something so specific to the experiences of the black women in our writers' room and our lives and it's something that we haven't quite seen much of on network television, so it felt like a story only we could do," adds Lilly.

In the episode, Bow first became aware that her all-white group of fellow activists may not quite represent an inclusive point of view when one made what she called "an ill-informed comment" failing to even consider that slavery was a worse time in American history than the current political climate. Enter Bow's "girlfriends" to add diversity and a broader perspective to the misguided group.

For example, when one woman makes a protest sign highlighting the gender wage gap and that "77 cents on the dollar is not good enough," Jones' Tina explained that the figure applies to what white women make compared to men and that black women make 63 cents on the dollar, and Latinx women make even less. One of the white attendees said she thought they should focus on the "overall numbers," failing to recognize that by "overall numbers," she meant only the number that applies specifically to white women. Later, the group was also so focused on getting a woman into an open congressional seat that they failed to take into consideration that the candidate had been a sheriff whose department "had a problem with excessive use of force."

Bow's white friend Abby (Nadia Quinn) eventually pulled her aside to reiterate that the group "is focused on women's issues" and that having the conversation continually drift toward race is "distracting from the bigger issue." For her part, Bow replied that Abby was asking her "to choose between being a woman and being black" but that she does not have that privilege. Eventually, Bow decided if she wanted a more inclusive group, she'd have to build one where women of color have their own safe space where their voices matter. This realization also made Diane (Marsai Martin), who had for the majority of the episode maintained she didn't believe in feminism, change her views. (Reggie Hayes aka Girlfriends' William also made a brief cameo when said group first convened at the final scene.)

As Lilly further elaborates, this point derived from those in the black-ish writers' room as well. "What we were really trying to show was a personal moment," he explains. "The point where, as it often does, someone is being asked to choose an identity to make things easier for someone else rather than consider the whole individual. And from the stories we gathered in the room we could see that ask was consistently being made of black women in a lot of these political organizations that have popped up over the past few years. For Bow it's crazy to suggest that her desire to include ideas of racial justice and equality would be pulling focus from feminist issues because those issues directly affect women."

Elsewhere in the episode, Dre (Anthony Anderson) also gets a "crash course in feminism" from "generation woke" sons Junior (Marcus Scribner) and Jack (Miles Brown) after realizing his views may be "antiquated." (At one point, he even saw nothing wrong with telling a female waitress to smile, though he wouldn't say the same to a man.)

After much trial and error, Junior got through to Dre by making a comparison to his struggle to get white coworkers to understand the Black Lives Matter movement "because every time it becomes uncomfortable, they all start to tune out." Dre acknowledged his own "blind spot" and wondered "if men treat feminism like white people treat racism" and couldn't believe he'd "been white guy-ing these women all this time."

In the case of Pops (Laurence Fishburne), Junior and Jack decided that his anti-feminist views were probably too ingrained at this point for them make any meaningful impact. In the end, however, the Girlfriends crew was able bring Grandma Ruby (Jenifer Lewis) to the realization that, even though she believes feminism is "just for white women," she is, indeed, a feminist herself. (They remained unsuccessful in getting her to hilariously loathe the label of "feminist" any less, though.)

The main takeaway from the episode was that it's crucial to take into account representation outside of one's own experiences. Understanding the ways race, gender, and other factors, such as sexual orientation or class, intersect can only serve to enhance, rather than impede, the impact of feminism as a whole. As Bow described, black women don't have the privilege of separating sexism from systemic racism — and the Girlfriends cast was the perfect addition to the episode to help hammer that point home.

More like this
Kim Cattrall Had A 'Sex And The City' Reunion With Creator Darren Star
By Grace Wehniainen
Mindy Kaling Explains Why 'The Office' Would Be "Inappropriate" Today
By Jake Viswanath
17 Photos Of The 'Wednesday' Cast Vs. The 1991 'Addams Family' Cast
By Grace Wehniainen
The 'Kenan & Kel' Reunion On 'SNL' Took A Dramatic Turn, Thanks To Keke Palmer
By Brad Witter
Get Even More From Bustle — Sign Up For The Newsletter