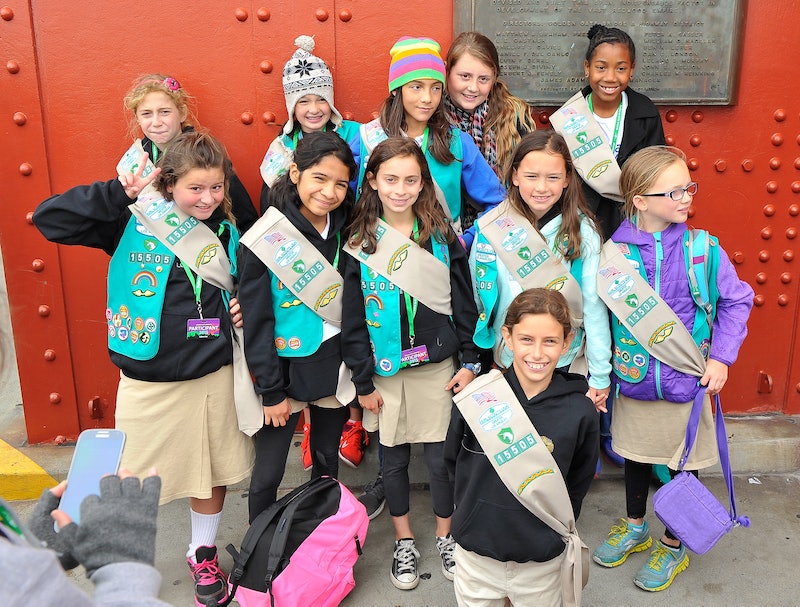 The Boy Scouts of America will be soon inviting a new kind of member into their Cub Scout program: girls. The decision arrived on Wednesday in an announcement that declared girls could join the Boy Scouts' Cub Scout program starting next year. But that had many people wondering what the Girls Scouts of the USA thinks of this development.

Girl Scouts is, and will remain, the scouting program that truly benefits U.S. girls by providing a safe space for them to learn and lead.

The Boy Scouts organization explained its decision in a press release, claiming the "historic decision comes after years of receiving requests from families and girls."

The organization evaluated the results of numerous research efforts, gaining input from current members and leaders, as well as parents and girls who’ve never been involved in Scouting ― to understand how to offer families an important additional choice in meeting the character development needs of all their children.

In spite of the Boy Scouts opening up to girls in the future, the Girl Scouts tells Bustle that it won't be changing its for-girls and led-by-girls philosophy any time soon.

"Girl Scouts is, and will remain, the scouting program that truly benefits U.S. girls by providing a safe space for them to learn and lead," a Girl Scouts spokesperson says, adding, "Only Girl Scouts has more than 100 years of experience helping girls tap into their leadership potential by reinforcing and extending the skills they learn in school in a supportive, encouraging environment in which they feel safe to just be themselves."

"At Girl Scouts, we are girl experts, and we work every day to help girls develop the courage, confidence, and character necessary to make the world a better place," the spokesperson states.

President of Girl Scouts organization, Kathy Hopinkah Hannan, was once more critical. Back in August, Hannan wrote to Boy Scouts president Randall Stephenson regarding reports that the organization was expanding their program and said, "I formally request that [Boy Scouts] organization stay focused on serving the 90 percent of American boys not currently participating in Boy Scouts [...] and not consider expanding to recruit girls."

Hannan isn't the only one critical of the Boy Scouts' expansion to include girls. Some people online have expressed their own reasons for pushing against the decision. Some stated that girls should remain in girls-based organizations and boys should remain in their programs. One person claimed that it would somehow "devalue" the rank of an Eagle Scout if a girl was allowed to join it. Several opined that the decision was motivated by "political correctness."

Supporters of the decision, however, expressed elation over the Wednesday announcement. One Twitter user noted, "Equality and inclusivity in the Boy Scouts is not 'political correctness.' It's basic human decency."

This won't be the first time that the organization opened its doors to girls. Ever since the 1970s, the Boy Scouts of America has given people the option of co-ed programs in the form of Exploring, Venturing, and some of its programs based in science and math. In addition to young girls getting a chance to enter the Cub Scout program, older girls will be able to join a separate program in 2019. The senior initiative could allow them to join the prestigious ranks of Eagle Scout.

In explaining its decision, the Boy Scouts cited a 2015 Pew Research study on social dynamics and families in America and said, "Families today are busier and more diverse than ever. Most are dual-earners and there are more single-parent households than ever before making convenient programs that serve the whole family more appealing."

The organization went on to note groups it felt weren't being served adequately and said, "Many groups currently underserved by Scouting, including the Hispanic and Asian communities, prefer to participate in activities as a family."

After conducting four internal surveys this year, Boy Scouts' organization wrote in their press release that parents seemed to be very interested in signing up their daughters for programs like Cub Scouts and Boy Scouts. "Education experts also evaluated the curriculum and content and confirmed relevancy of the program for young women," it added.

In spite of the Boy Scouts' plan to open its arms for girls in its Cub Scout program next year, Girl Scouts will continue to provide services and initiatives across the country. And it seems like this could be less of a problem and more of a chance for both organizations to provide young girls with even more opportunities in developing their educational and social skills. Win-win.