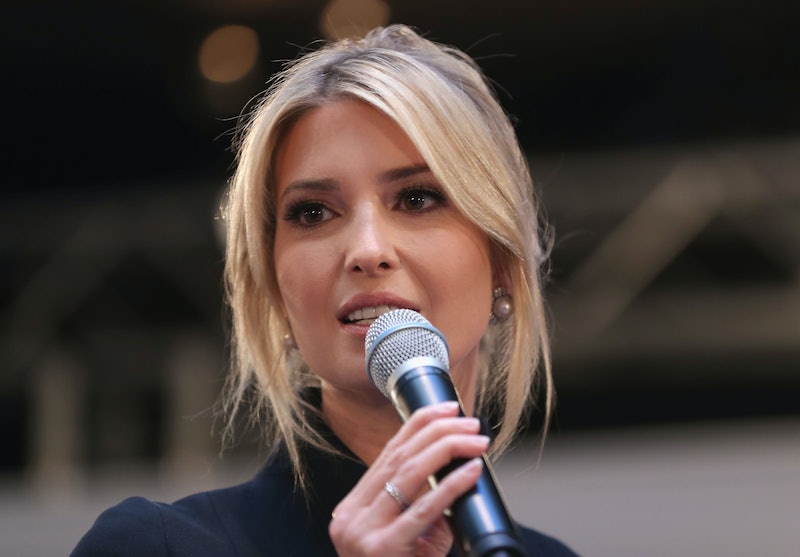 The first daughter's Women's Global Development and Prosperity Initiative (W-GDP) is set to receive a big boost in funding. On Friday, Ivanka Trump announced that her global women's fund will be included in President Trump's budget proposal for next year. If the budget passes, W-GDP will be allocated $100 million through the U.S. Agency for International Development (USAID).

Ivanka launched W-GDP in early February. The project aims to help economically empower women around the world through education and job training, investments in female entrepreneurs, and helping to get rid of legal obstacles that prevent women from participating in the economy. Ivanka herself is leading the initiative, and this year it's being funded with $50 million that was previously allocated to USAID.

The first daughter told the Associated Press on Friday that W-GDP is "working towards our goal of economically empowering 50 million women in developing countries by 2025" and explained that the president's budget proposal contains "a new $100 million commitment" to the initiative. Though the full budget has not yet been released, this $100 million will likely be a relatively small slice of the funds allocated to USAID. For the past several years, the federal government has given between $14 and $15 billion to the agency. According to the AP, Ivanka's initiative will also receive money from private investment.

The Brookings Institution released a report assessing the merits of W-GDP on Thursday. The think tank praised Ivanka's initiative for working to address women's needs in terms of physical capital and training in hard skills, but said that the project "fails to tackle some of the less visible barriers" to women's participation in the economy. In particular, the report noted that W-GDP doesn't have an adequate plan to address how women are constrained by unpaid care work.

Brookings also celebrated the fact that the project will work to establish better metrics for women's labor force participation to determine the most effective ways to improve it. The first daughter has touted this part of W-GDP.

"This fund will implement the administration's new strategy of foreign assistance, which emphasizes investments that produce measurable results and help recipient countries become self-reliant," she wrote in a February Wall Street Journal op-ed about the initiative.

Ivanka received help from more than 200 people and organizations when developing the project, including politicians like Henry Kissinger, President Richard Nixon and President Gerald Ford's secretary of state, per the AP. Condoleezza Rice, who held that position under President George W. Bush, has also enthusiastically commended the initiative.

The first daughter has said that she hopes W-GDP will become a permanent part of the U.S. government's foreign aid programming. "This is not an initiative that we think should stop at the culmination of the administration," she said last month, according to the AP. "We think it's something that should sustain itself over time, and we're going to work really hard to show that this is a great use of foreign development assistance."

The president's full budget proposal for next year will be released on Monday, according to the AP.