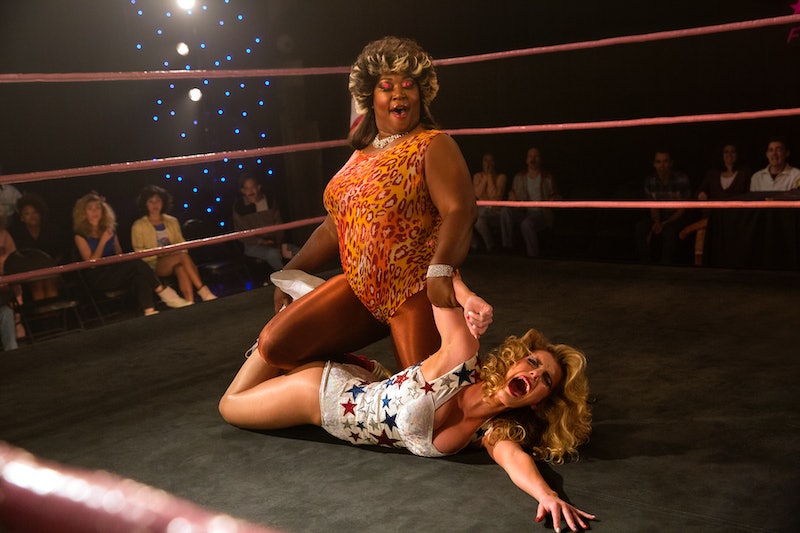 When Netflix officially announced that GLOW would return June 29, they did so with a pseudo-music video featuring the gorgeous ladies themselves, set to Flashdance classic "She's a Maniac" by Michael Sembello. As always, GLOW hits you with the one-two punch of nostalgia and strong, empowered women, looking tough as hell in their high-V leotards (why did people ever stop wearing those??) and getting down to business to the tune of an '80s hit. The GLOW Season 1 soundtrack made for some pretty ferocious gym music, leotard not included. If you're already jamming out to the sound of the second season, you might be wondering if you can stream the GLOW Season 2 soundtrack.

A selection of authentically '80s tunes helped keep GLOW Season 1 grounded in the decade of spandex and hairspray, so it was no surprise when Netflix released the soundtrack for everyone's listening pleasure. The first season premiered on June 23, 2017, and just three days later, Netflix made the full soundtrack available in a Spotify playlist. So although there's been no official word on the plan for the Season 2 soundtrack, if the network is planning to release a playlist, it will probably be ready for streaming at some point in early July if the pattern holds.

It's also worth noting that the Spotify playlist "All Out '80s" is, per its description, "curated by the cast of GLOW on Netflix." The collection might not actually be heard in Season 2, but it's definitely worth blasting on a boom box.

So what kind of songs made the cut for Season 2? When Season 1 premiered, GLOW's music producer, Bruce Gilbert, spoke to Billboard about his strategy for choosing the right tunes to include in the show. He mentioned that he tries to avoid putting in songs that are so overused in other shows and movies that they might actually distract or detract from what's unfolding on screen. "Because these songs carry so much nostalgia for so many of us," Gilbert said, "you run the risk of distracting the audience with one of their old favorites. I think we were able to avoid that by being really selective about when we let the bigger songs play."

Gilbert added that for him, restraint is key to making the soundtrack work. He continued to Billboard, "We made a conscious effort to use songs sparingly and not overload the show with music. I really didn't want to bombard the audience." It would have been an easy mistake to make when dealing with a decade that includes so much material, but Gilbert's method of making selective choices is sure to pay off in Season 2, too.

And how does Gilbert decide which songs would fit? Entertainment Weekly also chatted with Gilbert last June, and in that interview, Gilbert revealed that he tends to just lean on his instincts about what's right and what's a major cliche. "If there’s a song I love, I’m going to use it," Gilbert said. "You can sort of drive yourself crazy worrying about whether or not something else may or may not have been used somewhere. So you just do what you’re going to do naturally and know that it’s going to be as good as it can possibly be."

Thus far, Gilbert's instincts have served him (and GLOW) well. Judy Berman of Pitchfork praised Season 1 for managing to "escape '80s soundtrack cliches," by using songs from well known artists of the time period, but not necessarily their most popular hits. For instance, he opts for Pat Benetar's "Invincible" in the Season 1 finale, leaving out the done-to-death "Love Is A Battlefield. Rose Royce's "Car Wash" shows up in the scene at the roller disco, rather than in during the totally obvious car wash scene. It's safe to say the same careful consideration went into the music in Season 2.

Netflix is keeping its plans for the GLOW Season 2 soundtrack under wraps, so fans will just have to wait to decide which songs from the new season they'll be blasting. But with this show's track record (pun intended), that'll probably be a long list.