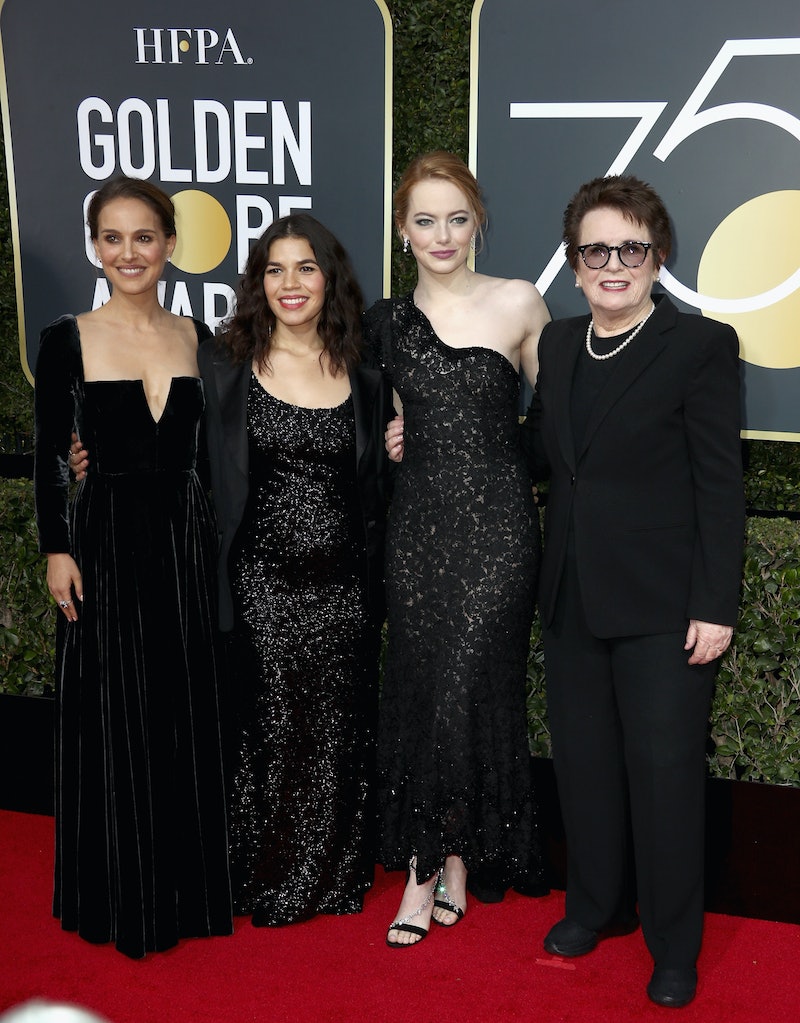 There are always magical moments at the Golden Globes, but this year's show was more emotional than ever. Women wore all-black to the awards show to protest the sexual assault allegations that have been taking over Hollywood and other industries. While hearing the women talk about the movement on the red carpet was incredible, photos of the Golden Globes audience in all black are downright stirring and powerful.

The first shot of any awards show is always fun to take in. It's like the Where's Waldo of celebrities. This year, as the camera panned to the celebrities in their seats for the first time, it was a sea of black. The moment was incredible and poignant. It was the first time that you could see visually how far this movement stretched. Just about the only color in the entire room came in the bright red centerpieces in the middle of the tables.

News of stars wearing black first broke weeks before the show when rumors started circulating that women would wear all black to the Golden Globes in protest. It was then announced a couple of weeks later that men would also wear all black in solidarity, a move that came with some criticism given the commonality of black tuxes at awards shows.

The overwhelming participation in the protest was first apparent on the red carpet. As stars began to show up, the question of how many people would step out in black was made clear. Almost every single celebrity to walk the red carpet was in black. Women wore gowns, pantsuits, and accessories and a handful of men wore "Time's Up" pins to show that they stood with them deliberately.

E! News, which aired the red carpet exclusively, also chose to ask women why they were wearing black instead of who they were wearing. It was the first shift of this kind to happen since the #AskHerMore campaign, which changed the conversation slightly. No question or interview could capture the feeling of seeing all the stars sitting together for the first time, though.

This is not just a color, a fashion statement, or a fad. This is a movement that will not stop with an award show. It is only the beginning of the conversation.

This is not the first time that a sartorial protest has come to awards season, though it is certainly the biggest show of protest. Celebrities have walked the red carpet wearing blue ACLU and pink Planned Parenthood ribbons during 2017. While it was a great way to open up the conversation and get people talking, it didn't take off the way wearing all black did.

The sexual assault allegations against Harvey Weinstein opened up a conversation about abuse of power and gendered violence in Hollywood. Women stood together and supported each other through the incredibly emotional time, especially using social media to connect and, in some cases, say #MeToo. That support was brought to life and made the movement into something that people could visually see when celebrities hit the Golden Globes.

It's not just a message the entertainment industry needs to hear, but all industries. The event comes just days after the Time's Up initiative was launch by women in Hollywood to support sexual assault and harassment survivors. The campaign has thus far raised over $15 million for women looking to take legal action against abusers in the workplace across all industries.

By wearing all black, celebrities showed their support and solidarity with women entirely through their fashion choices. Because sometimes making a major statement is as simple as what you wear.