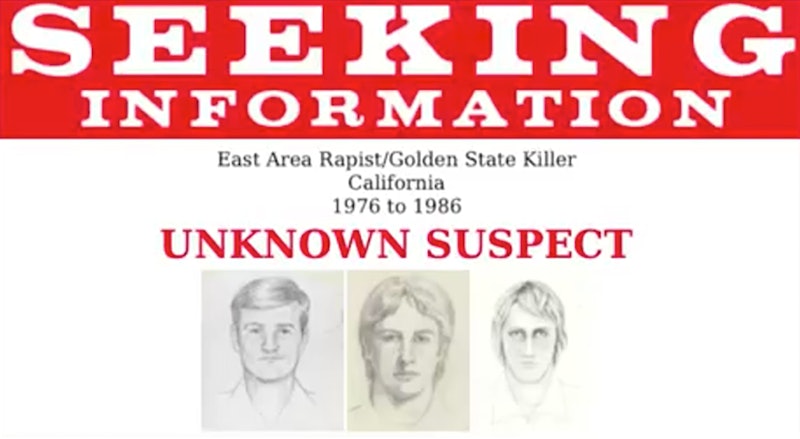 The person behind an infamous series of rapes, thefts, and murders in the 1970s and '80s may have finally been caught. The Daily Beast reports that a suspect in the "Golden State Killer" case was arrested on Wednesday morning in Sacramento County. Joseph James DeAngelo, who is 72 years old, was taken into custody on two counts of murder.

The FBI had offered up to $50,000 to anyone who could tip off the bureau with information that would lead investigators to the Golden State Killer, who is also known as the East Area Rapist. On its page about the murderer — listed under the "Most Wanted" section of the website — the bureau notes that the killer committed around 12 homicides, 45 rapes, and "multiple residential burglaries" from 1976 to 1986. He is believed to be a white man with light hair around 5'10" tall and is estimated to have been in his 20s when he began the crimes. He would now be between the ages of 60 and 75.

Beginning in the late '70s, the Golden State Killer broke into dozens of dwellings by night, tied and blindfolded the residents, raped the women, and stole from their homes. He left his victims alive in earlier years but later murdered many.

One victim who made her identity public has recently spoken out about the case. Jane Carson-Sandler was raped after she and her three-year-old son were blindfolded and tied up with shoelaces. "It was so important for someone to hear me and understand what I went through," she told TODAY.com in March. "That's when my healing began."

DNA evidence linked one man to the series of crimes across California. Investigators intensely pursued him but were never successful. "There were several times in the series when he was close [to getting caught]," a representative of the Sacramento County Sheriff's department told CBS Sacramento. "Unfortunately, officers had given chase but were unable to catch him."

Social media erupted with the news of DeAngelo's arrest on Wednesday.

Waiting For The Press Conference

The conference will be broadcast on several news stations at 12 p.m. Pacific on Wednesday.

"The True Crime Equivalent Of Landing On The Moon"

One user celebrated the apparent resolution of the Golden State Killer case, which she called "epic in every way."

Some joked that they'd cancel all their other Wednesday plans to focus on this new development in one of the most famous serial murderer cases of the last century.

This Is Actually Happening

GIFs were added to the general freakout.

Including Kermit the Frog memes.

Some referenced Michelle McNamara, the deceased author of a book on the murderer called I'll Be Gone in the Dark.

McNamara helped bring greater attention to the case in recent years, according to The Sacramento Bee. She died in 2016 while working on I'll Be Gone in the Dark, which was published posthumously in February of this year and became a New York Times bestseller.

McNamara deeply believed that the Golden State Killer would be found, even though so many years had passed since he was known to have committed his last crime.

"After May 4, 1986, you disappear," she wrote in a "letter" to the murderer in her book. "Some think you died. Or went to prison. Not me. I think you bailed when the world began to change. [...] Technology improves. You cut out when you looked over your shoulder and saw your opponents gaining on you."

The FBI renewed its focus on the case in June of 2016 with "a national, expansive media campaign," as reported by The Washington Post. A detective in the Sacramento County Sheriff's Department told the paper that he hoped the increased attention on the case would "push somebody over the edge who knows something" and "provide us with that one tip we need."

It seems to have done just that.

Read More About The Case

More like this
Joe Lycett Just Took HIs David Beckham Qatar Protest To A Whole New Level
By Sophie McEvoy
Footballer Jake Daniels Shared His Thoughts On A World Cup Boycott
By Sam Ramsden
Iran Has Issued A Death Sentence Over Mahsa Amini Protests
By Catharina Cheung, Darshita Goyal and Maxine Harrison
Ghislaine Maxwell Is Serving Her 20-Year Prison Sentence In Florida
By Gretchen Smail and Brad Witter
Get Even More From Bustle — Sign Up For The Newsletter