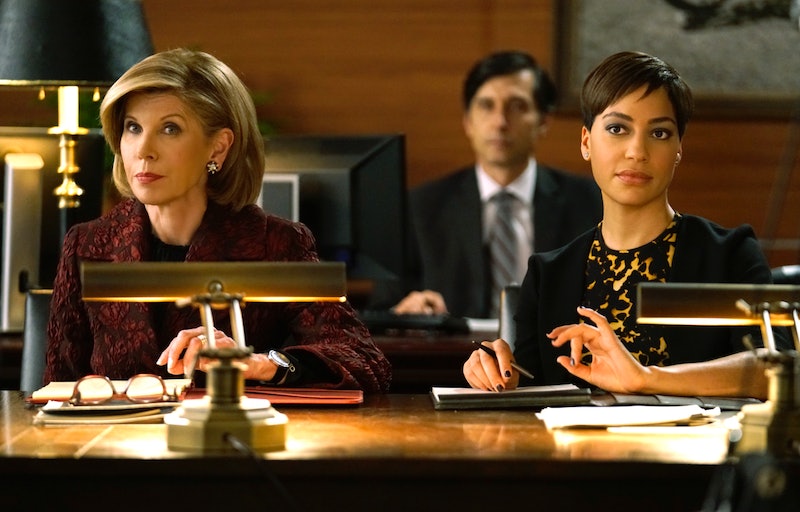 After a brief detour for their one-and-done political satire BrainDead, showrunners Robert and Michelle King are returning to the series that made them famous. But how does The Good Fight connect to The Good Wife, exactly? It's been only a relatively brief nine months since the latter series aired its final episode in May of 2016, so this new CBS All Access drama honestly feels more like Season 8 of that show than its own independent spinoff or sequel. And admittedly, the two series do have a lot in common.

Well, let's start with how they don't connect, shall we? Although The Good Wife had one of the strongest ensemble casts on television, it was also first and foremost the story of Alicia Florrick; but this time around, Julianna Margulies (who won two Emmys for her performance) is nowhere to be seen. Instead, The Good Fight will introduce a handful of promising new additions while putting the spotlight on some characters who lurked in Alicia's shadow last time around.

But The Good Fight isn't just connected to its parent series through its cast; it also continues a dangling plot thread from The Good Wife. Although that show was focused primarily on the life, loves, and ambitions of Alicia Florrick, it also slowly tracked the equally fascinating career of Diane Lockhart. Over the course of seven seasons, the powerful litigator mentored Alicia, entertained the idea of becoming a Supreme Court justice, quit her own practice to join a start-up, and championed the idea of starting an all-female firm.

According to Entertainment Weekly, the pilot of The Good Fight seemingly begins with the culmination of Diane's long and fascinating arc: she's about to quit the firm and retire in luxury, secure in the knowledge that Hillary Clinton has finally broken the last glass ceiling. Of course, that sentiment is derailed when Clinton loses the election to Donald Trump — and Diane's plan is equally derailed when her retirement fund vanishes thanks to a Ponzi scheme. Suddenly, the woman we saw work her way to the top through seven seasons of The Good Wife is suddenly on the bottom of the heap again, clawing her way to the top like everyone else.

Apart from plot and character connections, The Good Fight also serves as a spiritual successor of sorts to The Good Wife. One of the biggest additions to the story is Diane's goddaughter Maia Rindell (played by Game Of Thrones' Rose Leslie); since audiences will be unfamiliar with this brand new character, she won't provide a literal link to the original series… but her story has a lot in common with Alicia's, thematically speaking. You see, Maia's father — one of Diane's best friends — is the man accused of running the Ponzi scheme responsible for destroying Diane's fortune.

Between its cast, its plot, and its themes, there are a lot of things tying The Good Fight to the acclaimed series that inspired it. But with plenty of new cast members, new firms, and new cases, there will be a lot to distinguish it as well. So whether you're a die-hard fan of The Good Wife or a newcomer to the story, there should be something in The Good Fight for everyone.