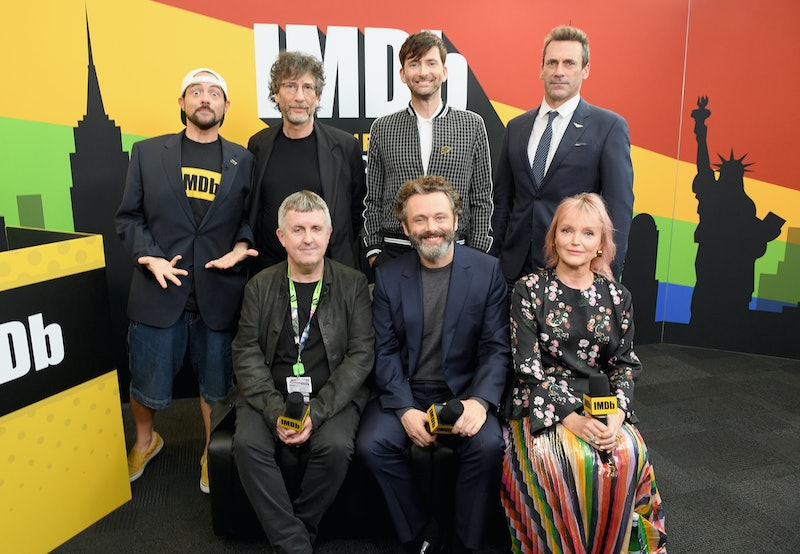 The end is near: Amazon Prime Video's upcoming doomsday limited series Good Omens' premiere date was just announced at at the Television Critics Association winter press tour, and — get excited — because it will be here before you know it. According to TVLine, the show's executive producer Neil Gaiman (who also co-authored the 1990 book of the same name with Terry Pratchett) told reporters that the series will debut in over 200 countries and territories on May 31 — and will also air later this year on BBC Two in the UK.

While almost all of the Good Omens cast had previously been announced, Gaiman also revealed that none other than Benedict Cumberbatch will lend his voice to a devilish character.

“It’s a giant animated Satan," Gaiman explained during the panel discussion in Pasadena, California, per Deadline. "He turns up and we needed a performance that works. So we found a young British help that needed a lot of direction from [Good Omens director Douglas Mackinnon]… Benedict Cumberbatch.”

The jokes about so-called newbie Cumberbatch continued over on Twitter with Amazon Prime Video's official account posting: "Glad the @GoodOmensPrime team is taking a chance casting up-and-comer Benedict Cumberbatch as the voice of Satan."

The Sherlock actor will, of course, be a worthy adversary to Oscar winner Frances McDormand, who plays the voice of God in the series. Also part of the all-star cast: David Tennant as Crowley, Michael Sheen as Aziraphale, and Jon Hamm as Archangel Gabriel.

For anyone who's unfamiliar with the plot, Deadline also described Good Omens as "equal parts humor and horror, fantasy and drama" and provided the following series synopsis:

"Good Omens takes place in the modern day when the Apocalypse is near and Final Judgment is set to descend upon humanity. The armies of Good and Evil are amassing, Atlantis is rising, and tempers are flaring. Everything appears to be going according to Divine Plan — except that Aziraphale, a somewhat fussy angel, and Crowley, a fast-living demon, are not looking forward to the coming war, and someone seems to have misplaced the Antichrist."

He didn't reserve all of the exciting news for the TCA attendees, however. The same day, he shared a Gaiman tweeted a handwritten note to fans that read, in part: "I know that people are getting slighting desperate to know when Good Omens is being released. Apparently "Spring 2019" just isn't enough."

He concluded his note, "I hope it leaves you, like Crowley and Aziraphale, on top of the world. ... Sorry about the world ending."

It's possible fans have never been more thrilled for the coming of the apocalypse.