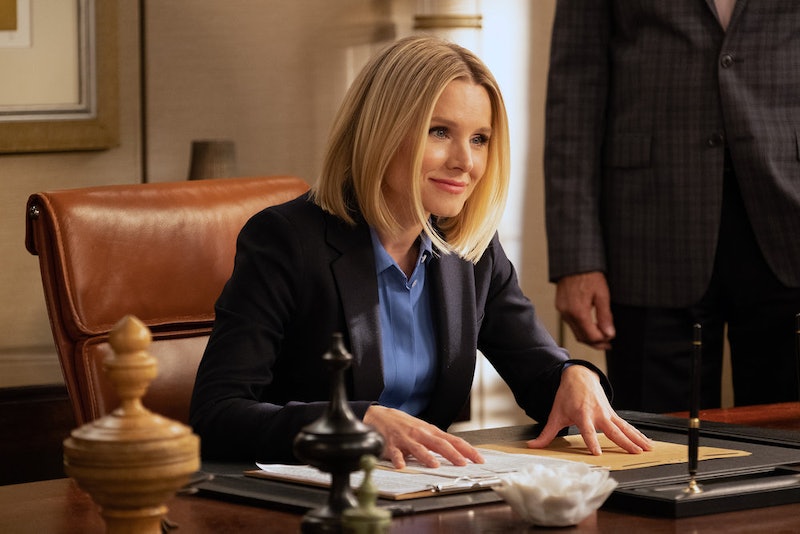 The Good Place has asked time and time again what it means to be good, what qualifies as a good action, and how intention plays into both. Early on in the series, Eleanor finds out that she won't be considered a better person if she does positive things for selfish reasons, because her selfishness outweighs the good she's doing. But as The Good Place Season 4 is starting to show, that doesn't necessarily mean good actions done selflessly are the only thing that should count. The season's second episode explores the idea of performing good actions from a more neutral place — either out of habit, or because you might as well. And it gets at the idea that, ultimately, trying to be good — no matter how you go about it — has to count for something.

In Season 4, Episode 2, "A Girl from Arizona (Part 2)", Eleanor, Michael, Tahani, Jason, and Janet have to figure out how to help the four humans they're observing — Simone, Brent, John, and a memory-wiped Chidi — become better people. So far, Simone and Brent are the main challenges. (They already know Chidi, and John is apparently not their first concern.) Simone believes that she's in a coma and the Good Place is her brain playing tricks on her. Brent is a raging ash-hole who calls Janet his "secretary" and thinks he doesn't belong in the Good Place, because he belongs in The Best Place.

After a complete loss of confidence because she's "not the freaking savior of the universe ... just a girl from Arizona," Eleanor is given a reassuring pep talk from Michael and realizes what she has to do. The first step? Telling Brent that there is a Best Place and that "the most morally upstanding residents get to go." Sure, Brent will be doing good deeds selfishly so he can get in, but Eleanor hopes that, eventually, his actions will become habit (which, as far as we know, apparently won't affect Brent's score).

Next up is Simone. Even though it breaks her heart, Eleanor tells Chidi that Simone is his soulmate so that he'll try to connect with her, and ultimately convince her that she's not just laying in a hospital bed somewhere. The plan gets off to a good start. Over some Yogurt Yoghurt Yoghurté, Chidi tells Simone that her solipsism is a "pretty juvenile" form of philosophy, and that she might as well be nice to people in case she's wrong and her entire reality isn't a figment of her imagination. "Why not treat them better just in case they're real?" he says. "What do you have to lose by treating people with kindness and respect?" She's receptive: "Keep talking, probably-fake-but-maybe-real philosopher man."

In Season 3, The Good Place focused heavily on unintended consequences. As Eleanor told the Judge, on Earth "there's this chicken sandwich that if you eat it, it means you hate gay people — and it's delicious!" And as Chidi pointed out, even if you try to consider every factor of every decision, you still can't win. Such was the case for him and for Doug Forcett, who agonized over making the best choices and yet still didn't earn enough goodwill to get into The Good Place.

Perhaps the question Eleanor needs to be asking, then, isn't "can people become good?" but "are they trying to?" Amid a world so complicated that being good no longer has a clear-cut answer, they'll need to take into account what it means to try anyway, regardless of the various reasons for doing so and regardless of the unintended (and uncontrollable) consequences. Because it doesn't hurt humanity to try, but it does hurt not to. Now, Eleanor will just need to convince the Judge of that, get a new point system in place, and it'll be shrimp dispensers for her for all eternity.