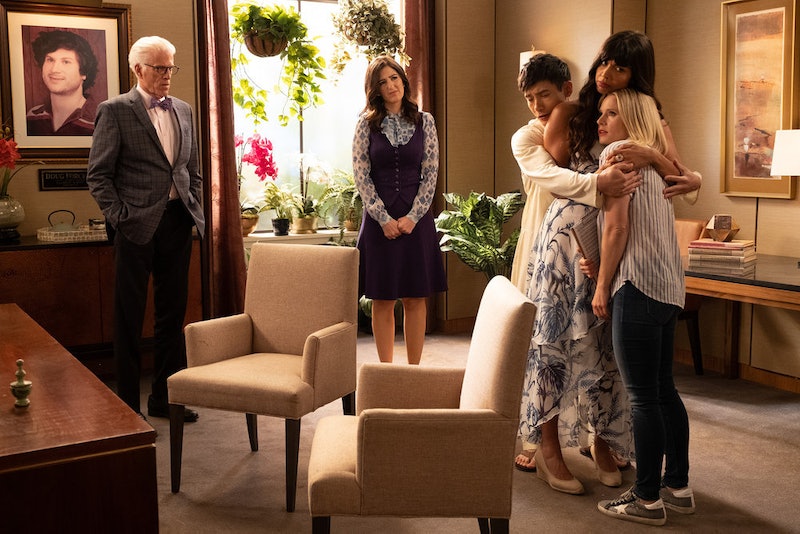 The Good Place premiered in the fall of 2016 — a week before the first Trump-Clinton presidential debate — with the sentence "Everything is fine" projected on a wall, an optimistic if meager promise. Newly deceased Eleanor (Kristen Bell) was about to learn she'd been run over by a billboard truck for an erectile dysfunction drug. Now, she's in the Good Place where everything is fine. Of course, that's a lie. In the Season 1 finale — which aired the day before Donald Trump's inauguration — Eleanor realizes she's been stuck in the Bad Place all along. For many watching, it was a familiar sensation. Three years later, NBC's The Good Place, perhaps the most deceptively political show on television, began airing its final season to a still-splintered America.

The earliest episodes of The Good Place were mostly focused on what it would mean for Eleanor, a binge-drinking, Ponzi-scheming trashbag while on Earth, to become good in the afterlife. The philosophical questions posed (What do we owe each other? Is lying always bad?) were universal but the exercise was singular: one woman's quest for redemption. That arc has largely concluded now.

The show's prevailing view has always been that a person can become good. The attachments Eleanor formed with fellow afterlifers have been offered up as evidence of virtuous traits she never had on Earth: she's demonstrated compassion for Tahani (Jameela Jamil), patience with Jason (Manny Jacinto), and personal sacrifice with her boyfriend Chidi (William Jackson Harper). She's moved from the series' ethical guinea pig to its moral center. Somehow, though, she still can't get ahead. Eleanor is objectively good, but she's not in the Good Place. In fact, we learned at the end of Season 3, almost no one is. The system — to borrow from this political moment — is rigged.

If the most valuable asset in the afterlife is real estate in the Good Place, it's reserved for a vanishingly small minority. No humans have been granted admittance in half a millennium. Doug Forcett, the person on Earth with the most good points, is the show's answer to a middle-class striver. He works tirelessly to play by the rules and still, we discover, is effectively doomed to be tortured in the afterlife as much as he's torturing himself on Earth. The message is as clear as it is brutal: however hard you try, you can't improve your situation if the institutions that govern society are broken. For Eleanor and the team to fix their own afterlives, it's not enough to become good. They'll have to take on the whole system.

The set-up — a holdover from last season — is simple. A new neighborhood has been established in the Medium Place and populated with four test subjects hand-picked by the Bad Place: gossipy Jon, blowhard Brent, dullard Linda, and Simone, Chidi's ex-girlfriend. The task is to make them better than they were back when they were alive, but the point is to force a reckoning with the status quo. The problem, the team realizes, is twofold: the world has become far more complicated than when the points system was first established, and the existential accountants appraising everyone's morality are too far removed to realize or understand that. If they want to make things fair, they need a leader — namely, the Judge (Maya Rudolph) — motivated to question antiquated legislation and enact real change.

In Thursday night's Season 4 premiere, "A Girl From Arizona," Simone emerges as the team's biggest challenge. She refuses to believe the afterlife is real, insisting with conviction — she was a neurologist while alive — that what she's experiencing is nothing more than the synaptic decline of her injured brain. She's the show's most overt nod to a certain disaffected trend in American political life. She pulls people in the neighborhood by the head and pushes them in the pool, but she's not bad. She's overwhelmed with her reality and finding it hard to believe that anything she does really matters.

By the end of the episode, neither Simone nor any of the other test subjects have made more than incremental progress in the direction of goodness. That's Eleanor's worry. The show's core concern has always been Eleanor's goodness, and it's propelling her into more and more ambitious moral territory. If the point of being good is to make the world better, being personally good isn't enough anymore. To live ethically in a society rife with structural injustice requires Eleanor to fight for reform. She used to be an Arizona trashbag; now, she's an activist. Simone's not just a romantic rival for Eleanor, but her solipsistic foil.

By coincidence, of course, the final season of The Good Place started two days after Congress launched an impeachment inquiry against President Trump. Who knows what else will have occurred by the time the finale airs. The show has made its reputation on asking serious questions about human existence, and it's smart enough to see its own milieu: those questions are more political than ever. The challenge for the series is not to answer them all, but to fulfill the meager promise it began with: everything will be fine.

The scope of Eleanor's moral responsibility now extends beyond herself and the people she knows. "Can Eleanor be good?" has become, "can Eleanor help everyone?" The undertaking is colossal, the stakes sky-high, and the early evidence — Simone is still terrorizing the neighborhood — far from promising. But perhaps the title of the premiere episode suggests a way forward, an echo of the inspiring (if perhaps apocryphal) words attributed to anthropologist Margaret Mead: Never doubt that a small group of thoughtful, committed citizens can change the world; indeed, it's the only thing that ever has.

In The Good Place, maybe the world can change with even less: one girl from Arizona.