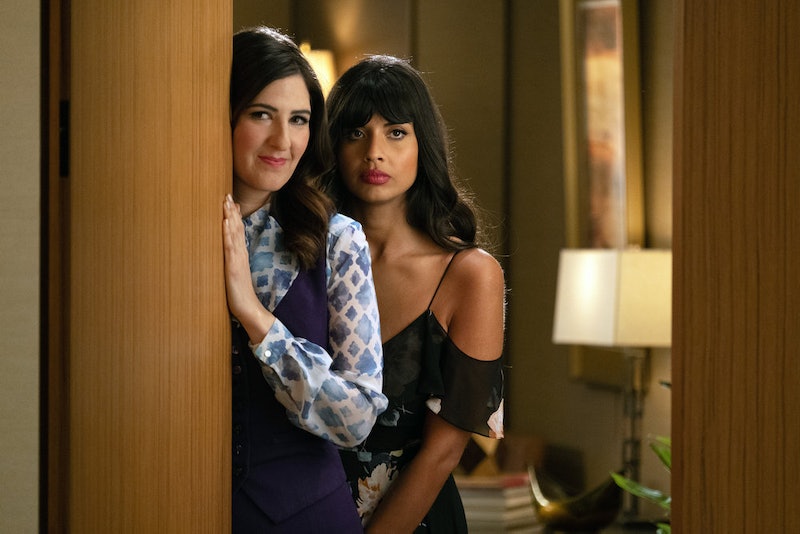 Get ready to be forking emotional. On Friday, NBC dropped the trailer for The Good Place Season 4, offering fans a first look at the final season of the popular show. During last season, Eleanor, Michael, and the rest of the group joined forces to test a new experiment. Together, they build a new neighborhood in hopes of proving people can better themselves with the help of others, and become worthy enough to stay in the Good Place. It's not yet clear if simply trying to be good will be enough to keep the characters from eternal torture in the Bad Place, but the premise sets the fourth season up to be an entertaining — and philosophically interesting — exploration of goodness.

In the trailer, the actors reflected on the making of the show, and offered a small look at what might be ahead. In a quick recap of the last season, the cast noted that while the main group are the architects of the new experiment, the Bad Place will get to choose the test subjects. Chidi's ex-girlfriend was among those picked, leaving his romance with Eleanor in question. The only real preview from the new season the teaser offered was that Janet will demonstrate her skills by conjuring an "elephant made of pure light that tells you the secrets of the universe." Turns out, Shirley Temple killed JFK.

Though this trailer didn't reveal much about the upcoming episodes, fans can certainly look forward to twists and turns — as well as the story coming to a conclusion. In June, The Good Place creator Mike Schur revealed that Season 4 would be the last, announcing the news on Twitter. Schur wrote: "After 'The Good Place' was picked up for season two, the writing staff and I began to map out, as best we could, the trajectory of the show. Given the ideas we wanted to explore, and the pace at which we wanted to present those ideas, I began to feel like four seasons — just over 50 episodes — was the right lifespan."

Fans were emotional about the decision — and clearly, the cast feels the same way. In the new trailer, Ted Danson described how sad the cast was about parting ways. "Right now, we're shooting the final episode and it's really kind of hitting us," Danson said. "Because within the story there are goodbyes that are mirroring us — the actors — having to say goodbye."

Kristen Bell, who stars as Eleanor, also talked about how meaningful her experience working on the show had been. "Hearing that our show had a 100% on Rotten Tomatoes," Bell said. "It just makes me feel lucky to be involved with something that became important to other people." Jameela Jamil lightened the mood a bit, joking, "I can't believe I had the chance to do this, this was my first ever acting job and I got to learn everything from Ted. So if I'm bad in this it's because of Ted Danson, and I"m sorry about that, and he's sorry."

Then, the trailer included a few highlights from the first three seasons, and holy forking-shirtballs, it's going to be difficult for fans to say goodbye to The Good Place. This trailer didn't reveal much about the upcoming season, but it will likely make viewers get in their feelings about the end of the show.