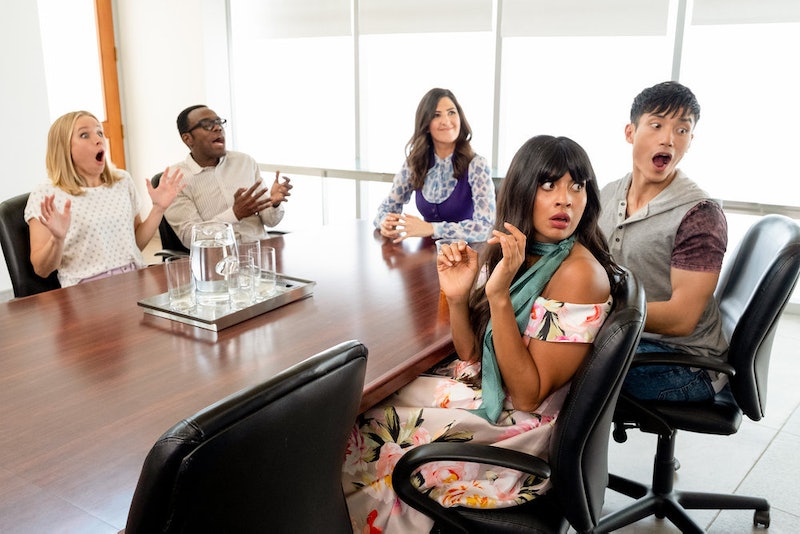 The third season of The Good Place will be known for bringing our favorite afterlifers back to Earth, that brilliant episode in Janet's void that showcases all of D’Arcy Carden’s improvisational chops, and now for an emotional season finale that punches all Chidi-Eleanor shippers in the gut. But perhaps when the dust settles, The Good Place will be best known for unpacking its own moral dilemma: How do you decide who is good enough to go to the Good Place? And what happens if those who must be judged believe the rules of the system that judges them are fundamentally flawed?

For the past three seasons, The Good Place has used moral philosophy to justify that a do-over is possible. That when the right group of people come together, they can help each other be better. Eleanor, Chidi, Tahani, and Jason are motivated by Michael’s friendship and belief in them and Janet’s unrelenting positivity to grow and become better people. In that journey, they were rebooted over 300 times, escaped demons, earned a trial before the afterlife’s burrito-loving judge, and even managed to undo their own deaths for a shot at goodness on Earth. But the dimension-traveling Season 3 has managed to turn the lens inward, to zoom on its characters and their moral inadequacies for a long, hard look at the setup that awards points and mercilessly discards people to to the Bad Place. And holy forking shirtballs! It appears the system is rigged!

Ted Danson’s Michael, a demon from the Bad Place who is turned over with the friendship of our protagonists, moves heaven and earth to earn his new friends spots in the actual Good Place. He manages to earn a meeting with the afterlife committee to fight for his friends, but realizes their logistics-obsessed processing model is unfair, and does not take into account all the complexity of the human experience. By acknowledging that individual people are not to be blamed for the exhaustive, exploitative experience that life on Earth can be, The Good Place manages to become its most self-aware version yet. We can’t be absolutely good, it says, because life on Earth is tough and complicated. So where does that leave us?

The Good Place is essentially telling us that our system is a mess, and the only way we can overcome it is by showing up for each other.

Nobody understands this better than Michael. For several episodes of Season 3, the former demon is Earthbound with his loyal sidekick Janet. He not only picks up millennial colloquialisms (“Epic fail!”), but turns more human, more prone to self-doubt, anxiety, and fear. Even Janet, the not-girl, not-robot, humanoid Siri with answers to every question in the world, has little to say to Eleanor when she’s gripped with the hurt of love. Janet and Michael knew and understood the afterlife, but a friendship with our protagonists and a trip to Earth made them question it, too. Their concerns and doubts and impulsive bursts are now guided by a deep seated bias toward their friends and the question of ethics. And as they become more emotional, they like the system of absolute moral binary — the Good Place vs. the Bad Place — even less. “The more human I become, the less things make sense,” Janet says in the finale. It would be a depressing comment, until she adds: “But that’s part of the fun, right?”

The best part about The Good Place has always been the group dynamics that brought Eleanor, Chidi, Tahani, and Jason together with Michael and Janet. Though the humans were all far from perfect, Season 1 forced them together, and friendship and questions of morality began to guide their actions. They did not just want to be in the actual Good Place, they wanted to be in it together. For them, raking enough points to earn a spot in heaven was a communal process. They had to help each other grow.

Eleanor explains that the afterlife does not expect them to pay rent, go to work, and essentially live through the draining politics of Earth. And that’s perhaps why our group can stick together. In chronicling their friendship, The Good Place stopped being about good and bad people, and instead became about company and communal support that is difficult in a setup that actively alienates us from each other.

The Good Place has never pitched itself as a political show, and if it did, many would probably roll their eyes. At its heart, The Good Place, like many of creator Mike Schur's other projects, is driven by pure emotional goodwill. But by addressing the fallacies of the points system — that coldly mathematical arrangement that pits humanity against each other — The Good Place is essentially telling us that our system is a mess, and the only way we can overcome it is by showing up for each other and defying it.

The end of Season 3 gives us another go at The Good Place, and a reboot of a much loved character. But unlike its past versions, this time it is not just the characters, but the system that is under judgment. The show’s audience has continually compared their own points with those of the characters, but now we can perhaps take a critical look at our world, too.

More like this
The 'Andor' Timeline, Explained
By Gretchen Smail
The ‘Kevin Can F**k Himself’ Season 2 Finale Twist Is A Full Circle Moment
By Grace Wehniainen
Nicola Coughlan Addresses 'Bridgerton' Season 3 Backlash
By Sam Ramsden
Gabby Petito’s Family Responded To The New Lifetime Movie About Her Final Days
By Grace Wehniainen
Get Even More From Bustle — Sign Up For The Newsletter