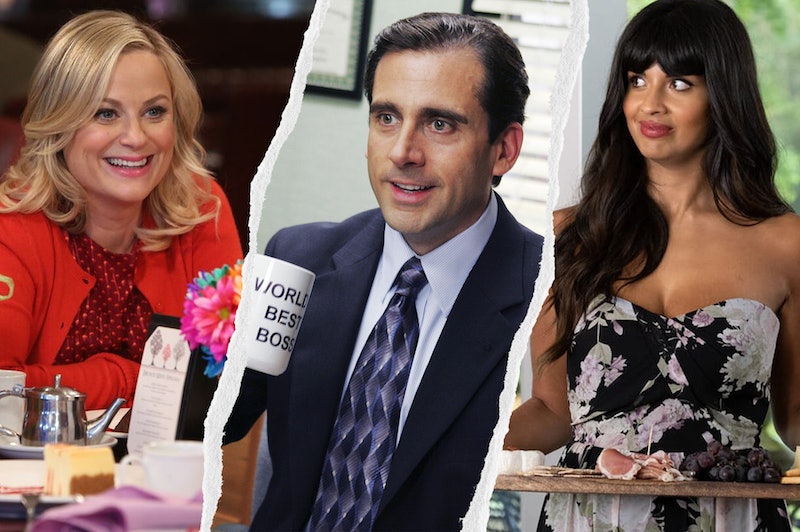 It would be hard to find a Netflix loyalist who doesn’t have The Office on repeat. The American adaptation of the British cringe comedy went on to have unprecedented success, lasting for nine seasons and giving us a meme for every occasion. The writing and acting crew have been responsible for some incredible work since then: Steve Carell is starring in one Oscar-nominated movie after another; John Krasinski is a new directing favorite; and Mindy Kaling has created shows, written books, starred in ensembles, and kept her off-screen banter with BJ Novak alive. But one Office alum in particular has been quietly, consistently working to create some of your favorite shows on television.

Michael Schur may have been one of the many excellent writers on The Office, but since then, he has become a showrunning veteran in his own right. He co-created Parks and Recreation with Greg Daniels and Brooklyn Nine-Nine with comedy writer Dan Goor; he pitched The Good Place to NBC on his own. All three shows are critically acclaimed and widely considered brilliant, but the popularity they enjoy is a very specific type of cult fandom: The kind that causes Brooklyn Nine-Nine fans to stage a massive cyber-protest in the wake of the show’s cancellation at Fox, so NBC could swoop in and save the sixth season. The kind that prompts fans on Reddit to go all-out in studying philosophy in an attempt to predict The Good Place's next twist. The kind that will create an Urban Dictionary entry for a now-iconic phrase ("Treat yo self") in Parks and Recreation lore. The kind that spawns endless Janet cosplay, and "Leslie Knope for president" fan art.

The fandom for Schur's shows might just be the happiest group online. So what is it about these shows that earns them such an ardent following, and why is it that all of these shows are so rewatchable? A simple social media search would indicate that fans turn to these shows in moments of personal crisis — to take a break from the current political landscape or end-of-semester stress levels — with each of these series functioning as a refuge from some of the harsher truths of the outside world. There's something inherently optimistic yet still insightful about all of these shows. They provide an alternate reality in which the mundanity of key facets of everyday life (usually the workplace, with the exception of The Good Place) is played for laughs without undermining the inherent goodness of the majority of the characters.

It helps that each of these shows is centered around a protagonist so sincere and authentically fleshed out that we cannot help but root for him (or her). The Office's Michael Scott just wants to be loved by all and find true happiness in that validation. Parks and Recreation's Leslie Knope is a diehard optimist, a believer in the system, and an active advocate for administrative reform. Brooklyn Nine-Nine's Jake Peralta and Raymond Holt are capable, disciplined cops who are good at their jobs and make it look effortlessly cool and fun. And then there’s The Good Place's Eleanor Shellstrop who, while not the nicest person at first, learns the values of friendship and loyalty, and discovers the power in goodness somewhere along that journey.

Mike Schur’s characters are not steamrolling voices screaming for attention. They’re quietly working, improving upon themselves and the world.

At a time when America is corroded by partisanship, the socialist Democrat in Leslie Knope and the stubborn Libertarian in Ron Swanson find common ground through friendship, mutual respect, and government work on Parks and Recreation. When tensions between private citizens and police forces are rife, we get the diverse, queer-friendly, feminist 99th precinct in Brooklyn Nine-Nine. And in a click-baiting world, when the more existential ponderings of philosophy and morality are sacrificed for instant intellectual gratification, we have four doomed characters on The Good Place asking the enduring question: Is a do-over possible? Schur weaves in these contemporary backdrops seamlessly, and in doing so, manages the impossible. He responds to our innate desires and queries as humanely as he possibly can, with a diverse group of actors at the helm.

Unfortunately, most shows with diverse cast members often erase the intricacies of their lived experiences, to an effect where the representations feel shallow and incomplete. Feminist storylines, queer characters, and characters of color are often emphasized for an episode or two to satisfy a seismic shift toward the political in television — and then quickly dropped. Schur subverts this by building storylines around a myriad group of people, each unique in their own way.

In Schur’s universe, women and characters of color are complex people full of delights and faults, and rarely do they succumb to the tropes that the industry imposes on them. Has any other show ever had a character like Raymond Holt, who’s unabashedly queer, ambitious, and equally capable of deadpan seriousness and cutting-edge sass? Then there’s a Senegalese academic in Chidi (William Harper Jackson), a hustling genius from South Carolina in Tom Haverford (Aziz Ansari), a vapid socialite from London in Tahani (Jameela Jamil), and a caring mother-hen in Michelin-Man Terry Jeffords (Terry Crews).

Schur’s characters not only defy stereotypes, they also help address television’s problem with token representation. Stephanie Beatriz, who plays Brooklyn Nine-Nine’s badass, bisexual cop Rosa Diaz, commented on how surprised she was to be cast on the show after Melissa Fumero had already been signed on to play Amy Santiago. Even though they were up for two separate characters, Beatriz was shocked that a mainstream show could have more than two Latina actors playing central characters, a sadly still rare occurrence in Hollywood.

Schur’s television has given us powerful female friendships, too. There’s Leslie’s undying adoration for Ann, Eleanor and Tahani’s fan-approved ‘ship that never succumbs to a silly rivalry over men, and the triumvirate of Amy-Rosa-Gina, which recognizes and accepts each woman’s quirks. Schur's shows have also given us groups whose members are fiercely loyal to one another, whether that be Parks and Recreation’s titular parks department, Brooklyn Nine-Nine’s eponymous precinct, or the damned-but-hopefully-redeemed humans and those who help them on The Good Place.

And then there are the romances, each of which is as complete, endearing, and feminist as the next. The women in Mike Schur’s television shows are ambitious, flawed but ultimately courageous characters who find their romantic partners at their own pace, without needing to sacrifice their most innate qualities. In Parks and Recreation, it is Ben Wyatt who makes space for Leslie Knope’s political career, just like Jake Peralta does for Amy Santiago’s disciplined rise up the ranks in Brooklyn Nine-Nine. The men are never portrayed as dormant pushovers; they actively champion women's ambitions and emotional growth. Even in The Good Place, Chidi remains Eleanor’s everlasting support, as they slowly and many times over acquiesce themselves to each other’s eccentricities. No one partner comes off shortchanged.

But no amount of careful considerations for inclusivity and political correctness can guarantee a show its fanbase if it’s just not good, and Schur’s shows do all of this without compromising on the humor. Schur’s greatest skill as a showrunner is to take relatable characters and place them in extraordinary circumstances — whether it’s the Heist episodes of Brooklyn Nine-Nine that become increasingly absurd with each season or the literal fact that the characters of The Good Place are dead and in heaven — and still make them hilarious. The humor is never alienating, because the jokes never come at the expense of the misfortune of their characters. In a sea of questionable television writing, to be able to watch a show and not feel guilty for enjoying it feels like an undeserved reward, like you’ve been gifted the precious secret to happiness as the world burns around you.

Mike Schur’s characters are not steamrolling voices screaming for attention. They’re quietly working, improving upon themselves and the world. They’re the unsung heroes, the good people. The ones you champion, and want to be more like. And perhaps that's why we can't stop watching Mike Schur’s shows. We could all do with the hope that it gets better.

More like this
UK Viewers Are Now Able To Board Seth Macfarlane’s 'The Orville'
By Frances Stewart
What’s New On Netflix: 'Never Have I Ever' & 'Indian Matchmaking' Return
By Arya Roshanian
What’s New On Netflix: 'Bridget Jones’s Diary' & 'Monster-in-Law'
By Arya Roshanian
Neil Patrick Harris & David Burtka’s Relationship Status Is Far From ‘Uncoupled’
By Jake Viswanath
Get Even More From Bustle — Sign Up For The Newsletter