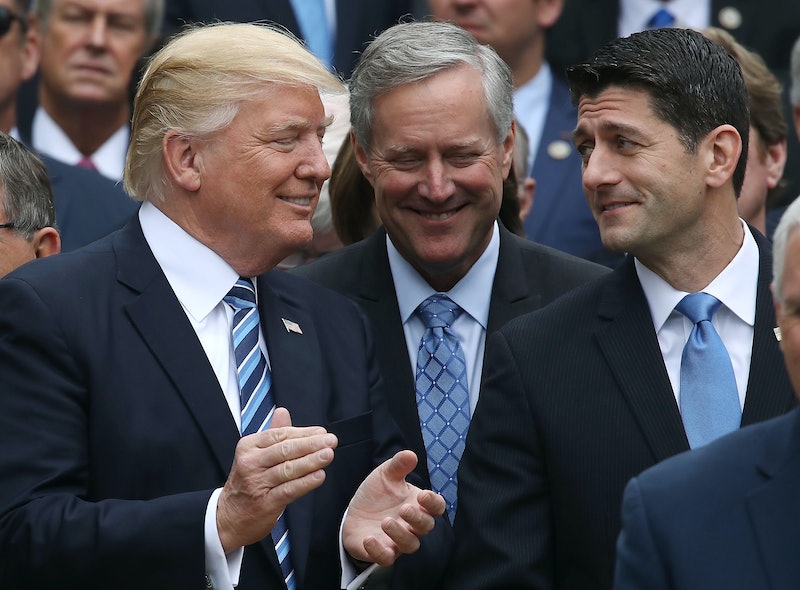 On Thursday, the Republican party made one thing clear: they don't care much about the lives of people like me. Between President Trump's new "religious liberty" executive order, which opens the door to increased legalized discrimination against women and the LGBTQ community, and the House of Representatives' narrow passage of the American Health Care Act (AHCA), it was a terrifying day to be a chronically ill queer trans woman.

The executive order, which the administration claims "promot[es] free speech and religious liberty," is far more vague than the original version that was leaked back in February — but it gives the Executive Branch wide latitude in its ability to defend "religious liberty." While discrimination against LGBTQ people in employment, housing, and public accommodations remains legal in the majority of US states, given the number of vehemently anti-LGBTQ appointments Trump has made (particularly Attorney-General Jeff Sessions, who has been notoriously opposed to LGBTQ rights), this executive order could potentially open the door for a whole new wave of attempts to drive gay, bisexual, and transgender people from public life— all under the guise of religious expression.

The AHCA represents a major assault on most of the critical provisions of the Affordable Care Act, including repealing the individual mandate and the rule requiring employers to offer healthcare to their employees. It will allow insurance companies to charge more for people with preexisting conditions, gut the Medicare expansion, and undermine the essentials services requirements, as well.

For someone like me — who has come to rely on the stability in coverage created by the ACA, and for whom discrimination is an everyday reality and fear — it is clear that the Republicans in the House and in the White House care more about their agenda and tax cuts for the wealthy than they do about us.

I see five different specialists to manage the condition, and the various symptoms land me in the emergency room several times a year at least.

I suffer from a genetic disease called Ehlers-Danlos Syndrome. It causes my body to make defective collagen, a protein found in connective tissues; it affects nearly every organ system in my body. I suffer frequently joint dislocations, chronic pain, autonomic nervous system dysfunction, easy bruising, fatigue, and cognitive difficulties. There is currently no cure, and only symptomatic treatment that means I need an ever-evolving cocktail of medications to attempt to remain functional. I see five different specialists to manage it, and the various symptoms land me in the emergency room several times a year at least.

I also suffer from Crohn's disease, an inflammatory intestinal disease. The medication I use to control my Crohn's retails for over $1000 a month without insurance. Without it, my Crohn's would flare up quickly, leaving me in agonizing pain and unable to properly digest food. If left unmanaged long enough, I would end up with extremely dangerous complications that would require an expensive surgery to save my life. Thankfully, I have been able to manage my symptoms well enough to stay employed, but that has certainly not always been a given for me, and may not always be possible in the future.

As of now, I maintain health insurance by continuing to work in health care, in addition to being a writer. If the AHCA were to become law, obtaining insurance on my own would become impossible. According to analysis from the Center for American Progress, even a relatively minor chronic condition could cost $5000 or more a year in additional premiums. Someone like me could pay many times that amount just to obtain bare-bones coverage.

Under the AHCA, I will lose all those protections, and my ability to access these essential, medically necessary services will be at the whims of insurance companies.

I'm a transsexual woman as well, which adds a number of complications to my health care. I will require lifelong hormone therapy, and my regular health preventative health screenings are different from those typically needed for someone assigned male at birth (i.e mammograms, gynecology visits, and DEXA scans). Under the ACA, insurance companies were banned from broad exclusions of trans-related medical care such as hormone therapy, were not allowed to charge me higher premiums or refuse to insure me for being trans, and could not refuse essential female-specific preventative care due to my assigned at birth sex. Under the AHCA, I will lose all those protections, and my ability to access these essential, medically necessary services will be at the whims of insurance companies.

I'm also terrified that I easily could lose my health insurance entirely. Trans people experience extremely high levels of (often perfectly legal) discrimination, particularly in employment. In my home state of Michigan, a job could decide at any given moment to terminate me because of my gender identity, leaving me without insurance; the company would experience no legal repercussions. Under the ACA's Medicaid expansion, I would qualify for state insurance benefits in that case, but as mentioned before, the AHCA would decimate those programs and likely leave me uninsured.

It is also entirely possible that I will reach a point where I can no longer manage my symptoms well enough to successfully hold a job. While I can theoretically apply for disability benefits (which would include Medicare, if approved), that process often takes many years to get approval. In the meantime, I would be completely uninsured. In either case, without access to the medications I need, my quality of life would be extremely poor, and it is likely that I would die long before those benefits came through.

What terrifies me the most, however, is that doctors or hospitals could refuse to treat me in an emergency and simply leave me to die. The ACA also prohibits hospitals and other medical services that receive federal healthcare dollars from discriminating against trans people. That protection would be lost under the AHCA, and Trump's new executive order on "religious liberty" means that even if the AHCA doesn't pass, this particular piece of the ACA may no longer be enforced in religious hospitals or on any provider who feels it's against their faith to provide me medical treatment because I'm trans and/or gay.

And if you don't think that's possible: some Catholic hospitals have already asserted that they can refuse to perform a life-saving pregnancy termination.

Without the protections of the ACA, a period of unemployment could have disastrous consequences for their health and their finances, and the statistics are even more dismal for people of color.

As much as I worry about how this affects me, I realize that people with even more serious and difficult-to-manage conditions like cancer, diabetes, and serious childhood disabilities have even more to lose. According to the Partnership to Fight Chronic Disease, 45 percent of Americans suffer from at least one chronic health condition. Without the protections of the ACA, a period of unemployment could have disastrous consequences for their health and their finances, and the statistics are even more dismal for people color.

Of course, unmanaged chronic health conditions create far, far higher health care expenditures than simply managing those conditions in the first place. If those higher costs are also denied by insurance companies, they would most likely absorbed by hospitals, which ends up driving up the cost of care of everyone to compensate — one the key reasons that healthcare reform was needed in the first place.

In the end, living with and managing a chronic illness can be an incredibly demanding and exhausting thing to do, even in the best-case scenario. Between managing doctors appointments, medication schedules, self-care, and our often constantly-evolving symptoms, it can often feel like having chronic health issues is a full-time job all on its own. The ACA provided us a lot of much-needed certainty about the availability of care for our specific needs. While it is certainly not a perfect solution to our broken healthcare system, it's been a tremendous step forward and a huge load of stress off our shoulders. For the millions of us who are disabled or who suffer from chronic health issues, and particularly for the most marginalized among us, replacing the ACA with something so destructive to what little stability we have amounts to little more than a death sentence, with the execution carried out through slow, painful neglect.

If you're struggling emotionally right now, call the National Suicide Prevention Hotline at 1-800-273-8255, or go to their website, suicidepreventionlifeline.org.

More like this
Scotland's First Period Dignity Officer Is... A Man?
By Darshita Goyal
Why Experts Say Sleeping With A Fan On Isn’t Totally Risk-Free
By Sophie McEvoy
The 5 Best Sand Flea Repellents For Bite-Free Living
By Elizabeth Enochs
The 12 Best Air Fresheners For Bathroom Smells
By Amber Petty
Get Even More From Bustle — Sign Up For The Newsletter