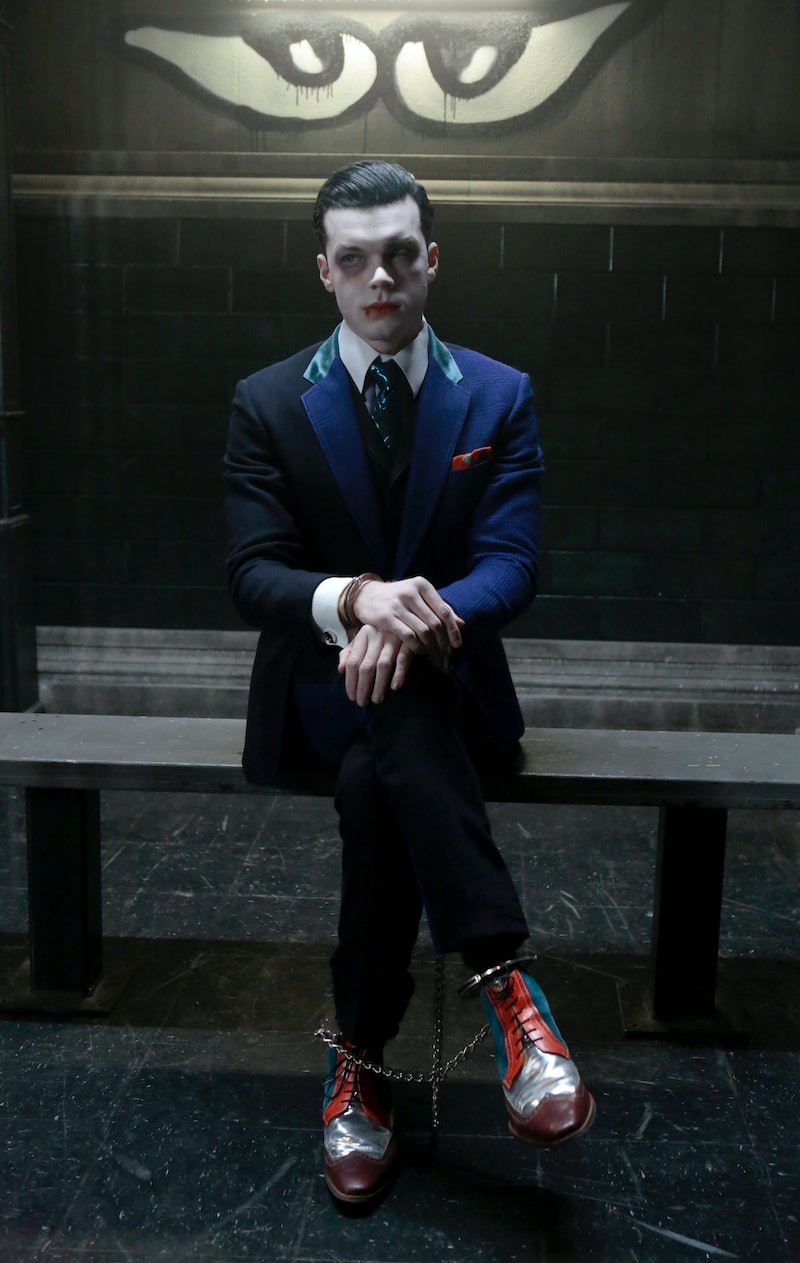 At long last, Batman's iconic nemesis, the Joker, will make his debut on Gotham. Yes, the character will appear in the series finale, airing April 25, and it's truly been a long time coming. As fans of the prequel series will know, actor Cameron Monaghan has been slowly inching toward this reveal throughout the entire show — his character(s) have always been reminiscent of the Joker, but he hasn't yet made the full transformation. Now, he'll finally make the leap.

How the show got here is kind of a long story, but as outlined by Gizmodo's io9, Monaghan first starred as Jerome Valeska, and gave off some serious Joker vibes from the get-go. Later, though, it was revealed that Jerome had a twin brother named Jeremiah, also played by Monaghan, and it soon became clear that he, not Jerome, would eventually become the villainous clown.

As Monaghan noted on Twitter, Gotham fans will never hear this character explicitly referred to as the Joker, even though it's obvious that's who he's meant to represent. Monaghan called it "a decision from high-up," and explained that Gotham would also be unable to use the trademark bright green hair for its version of Batman's infamous rival.

But what they came up with is still pretty chilling, and definitely evokes the same presence as the Jokers who came before him. From Gotham's official Twitter:

According to ScreenRant, the inability to explicitly refer to Jeremiah's character as the Joker likely has something to do with a Warner Bros. policy barring its characters from appearing in multiple projects at once. This would make sense given that Todd Phillips' highly anticipated Joker origin story, starring Joaquin Phoenix, is set to hit theaters in October.

But Gotham has been able to skirt around that pesky issue with a little creativity. John Stephens, the series' executive producer and showrunner, told IGN last year that it's part of why they decided to kill off the Joker-ish Jerome in favor of Jeremiah, who's his own kind of menacing — they wanted to show different aspects of a Joker-type personality. He said:

"Some of it was born out of the fact that we could never have the Joker-Joker character on the show. We wanted to try to develop a new character who could embody another element of the Joker persona. It felt like Jerome, as great as he was, had gone as far as we could go with him. So we spoke to Cameron [Monaghan] as well and discussed doing the character as a version that's just as insane as Jerome, but who controls it in a different way. And to do a quieter and scarier version of the lunatic."

Gotham fans have been enamored with Monaghan's performance for some time, and now that he's gearing up for his final form, people are excited.

Monaghan teased the final episode to Entertainment Weekly, saying he's never quite had as much fun on Gotham as he does wrapping up with this final villain, cryptically deemed "J." "The character I most enjoyed playing is the one in the final episode that we haven't seen yet," he said. "When you have an episode that's a full-on Batman episode running around in the future, you're going to have characters that you’ll expect to see."

Icons like Heath Ledger and Jack Nicholson have already brought the Joker to life, so Monaghan has big shoes to fill in this final stretch. But he's done amazingly so far, and Gotham fans are ready for the big reveal.