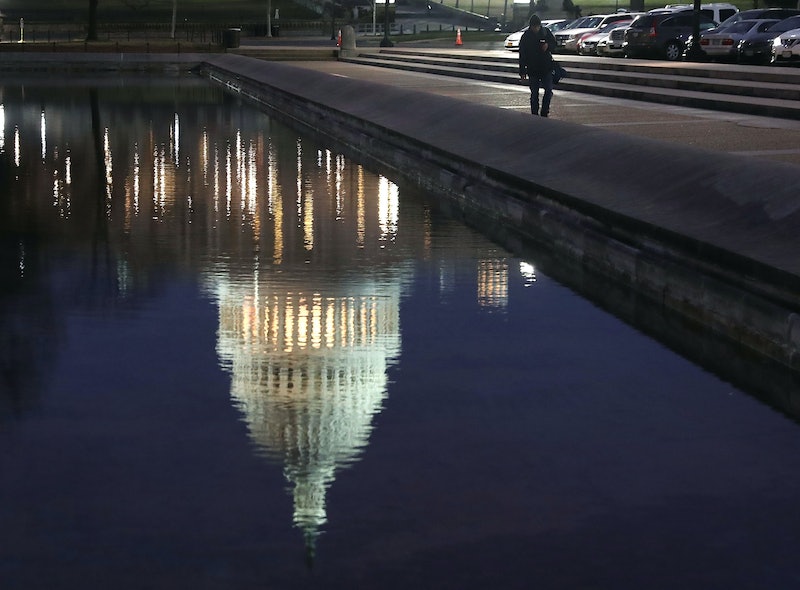 As the partial government shutdown goes on, its effects on different communities are becoming clear. While blaming the Democratic Party for the government partially freezing, on Wednesday, President Donald Trump remained adamant about securing funding for his border wall. But as lawmakers quarrel about border security, here's how Native Americans are affected by the government shutdown, according to The New York Times.

On Tuesday, the Times published an extensive report on the instability Native Americans face under such circumstances. It reported that the Chippewa tribe in Michigan was losing out on some $100,000 on a daily basis, for critical services like food programs, medical aid, and workers' salaries.

For now, the tribe is paying for these programs out of its own pocket, per The Times. But it's not certain whether it will be reimbursed; a letter from the Indian Health Services to various tribal leaders stated that it cannot pay them back until the Congress passes a spending bill for those purposes.

Under various treaties with Native tribes, the U.S. government promises indigenous people funding for health care, nutrition, and more in exchange for land. Aaron Payment, the chairman of the Sault Tribe of Chippewa Indians, told the Times that the government is failing to honor those treaties. "The federal government owes us this: We prepaid with millions of acres of land," he said. "We don’t have the right to take back that land, so we expect the federal government to fulfill its treaty and trust responsibility."

It's a bleak situation. According to journalist Mark Tahant's report in the Indian Country Today, the Bureau of Indian Affairs' operations temporarily halt under a government shutdown. The agency is part of the Interior Department, and about 54 percent of its funding is directed to helping run the Indian Health Services, which funds critical health programs. The agency already doesn't get a lot of money, and when there's a government shutdown, its funding is temporarily frozen.

Under this government shutdown, The Times also reported that the Bureau of Indian Affairs would be furloughing 2,662 of its 4,490 workers. For those who live paycheck to paycheck, this could have huge consequences.

At least one lawmaker has attempted to help indigenous Americans during such shutdowns, but his efforts arrived at the eleventh hour. Oklahoma Republican Rep. Markwayne Mullin, who is also Native American, introduced legislation to keep the Indian Health Services running in the event of a government shutdown. Mullin, however, introduced it on Dec. 20, just a day before the shutdown began.