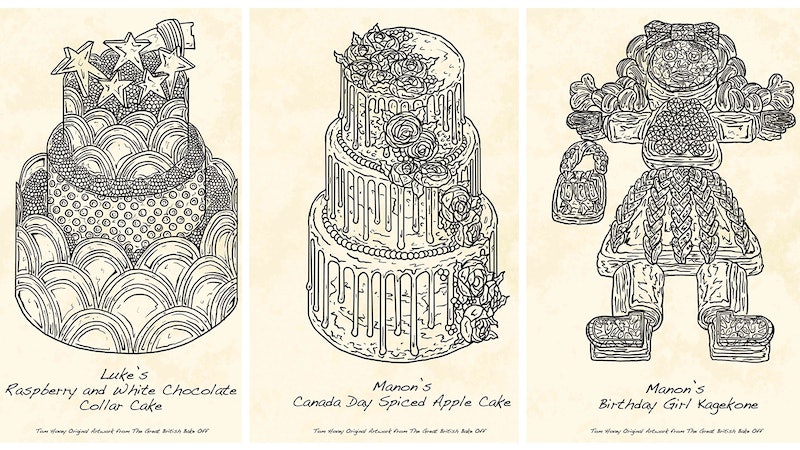 If there’s one thing that unites us all, it is the dulcet tones of the Great British Bake Off. The show is sweet! It’s soothing! Its stakes are so low you’ll forget there are any troubles other than someone’s bake not setting properly! If you’re looking to bring a little more of that dessert-centric serenity into your life, you’re in luck, because you can buy the illustrations from Great British Bake Off. Ogling the illustrated eye candy is the next best thing to actually getting to taste the desserts.

You can be greeted every morning by Manon’s Birthday Girl Kagekone from season nine. You can stare longingly at Terry’s Champagne and Strawberries Eiffel Tower Collar Cake, frozen in time before it met its fateful, melty demise. Hovey has over 50 different prints available to buy in his shop which is great news for you and terrible news for your bank account.

How much does one such print cost? Can you put a price on dessert-induced bliss? The answer is yes, and it is significantly less than you might expect. Hovey sells each print in two sizes: 14.8 x 29.7 cm and 21 x 29.7 cm. The smaller size is £15 ($19.28 US) and the larger size goes for £25 ($32.13 US). While Hovey is based in the UK, he ships to the United States. You’ll just have to pay an additional £7.00 ($8.99 US) for international shipping. In other words, you can get a print of your favorite dessert from the show and still have some extra cash to treat yourself to an actual dessert.

Season 10 of the Great British Bake Off started at the end of August, marking Hovey’s tenth anniversary of illustrating bakes for the show. “I thought I’d show how my illustrations have developed and changed over the past decade,” Hovey wrote in an Instagram post, reflecting on how his position even came to be. According to Hovey, the show’s editor and director thought the show was missing a visual element, “something to help the viewers understand what was hopefully being created.” Hovey got the dreamest of dream jobs and, in his words, “the rest is history. In his post, Hovey noted that he and his team have drawn “well over 3,000 bakes to date.”

Hovey recently spoke to Food & Wine about getting the job and what a day in his life looks like. “I am sent photos of the finished bakes from various angles so I can get a good idea of the whole bake," Hovey explained to the outlet. “My job is to illustrate what they planned to create not what they actually baked in the tent. So sometimes if the bakes don’t go as planned I have to work out with the producers and the bakers how to fix the issues, add missing elements, extra layers, that sort of thing.”

In his Instagram post, Hovey noted his awe and gratitude to the bakers whose work he gets to illustrate every season: “Thank you to all the amazing bakers whose talents and creativity makes my brain melt every year, with what they can create with some flour and eggs.” What Hovey is able to create with pencil and paper, some pen and ink, is, of course, equally impressive.

More like this
At 28, Prue Leith Was In A Secret Affair & Sharing Apple Pie With Stoned Neighbors
By Grace Wehniainen
Twitter Can’t Get Over The One Thing Missing From 'GBBO's Tense Finale
By Darshita Goyal
Pepsi’s Festive Flavour Is Finally Coming To The UK
By Sophie McEvoy
Heinz Just Relaunched A Bean-Tastic '90s Fave
By Sam Ramsden
Get Even More From Bustle — Sign Up For The Newsletter