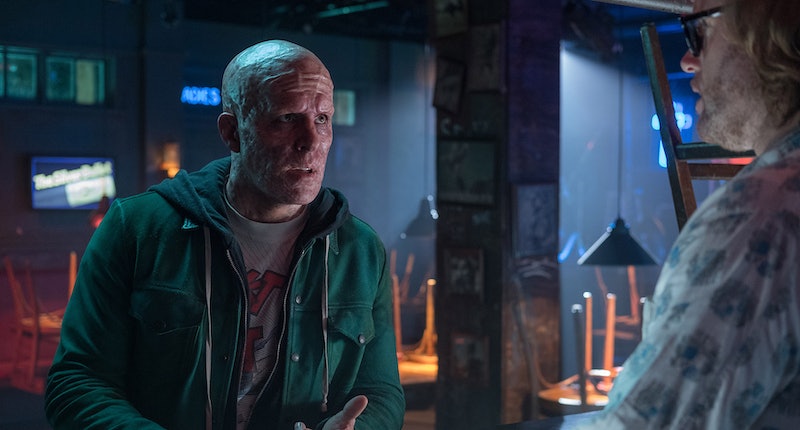 Spoilers ahead. There are a few things that audiences have come to expect from a Deadpool movie: excessive violence, R-rated jokes, a baby appendage growing out of a man's body, and, of course, a Green Lantern joke. And Deadpool 2 does not disappoint. The Green Lantern joke in Deadpool 2 is even more brutal than the zinger in the first Deadpool, and it combines a few of the titular's hero favorite things: murder and the green, CGI superhero bomb.

In 2016's Deadpool, the first Green Lantern joke came in the first scene of the movie, with a few more memorable ones to follow, but fans had to wait a bit longer in Deadpool 2 to get the joke. Green Lantern isn't mentioned until the end of the post-credits sequence in Deadpool 2, but it is well worth the wait. At the end of the film, Deadpool goes back in time to change a few things using Cable's time traveling technology. He saves the love of his life, Vanessa, rescues a member of the X-Force, and cleans up the X-Men timeline by shooting Wade Wilson from X-Men Origins: Wolverine in the head. His final stop is a bright apartment building where a 10-years younger Ryan Reynolds sits happily holding the Green Lantern script in his hands. Deadpool shoots him in the head, blood splattering on the screenplay. "You're welcome, Canada," he says, looking straight into the camera.

Needless to say, the Green Lantern joke in Deadpool 2 is pretty harsh. And while Reynolds has been open about making fun of his less successful superhero past, joking about violently shooting himself in the head to keep him from doing the movie is definitely a step further from Wade Wilson asking that his super suit not be green "or animated" in Deadpool. But Reynolds wants to make clear that the joke isn't so much making fun of the movie itself as it is making fun of himself. "The Green Lantern [joke in Deadpool] to me is just sort of, I don't know, kind of fun," he said in an interview with Entertainment Weekly. "It's me just taking the piss out of me, but it's more Wade though."

The post-credits gag is the only Green Lantern joke in Deadpool 2, but the movie has been very present in the promotion of Reynolds' new superhero film. It comes up in a promo featuring the actor as Deadpool apologizing to David Beckham for making fun of his voice in the first film, as well as a string of his biggest flops including Green Lantern. Even Deadpool 2 co-star Josh Brolin got in on the fun during a recent Insult battle for BBC Radio 1. "Green Lantern. End of career, and yet you're still going. Why? None of us can understand," Brolin said. Reynolds also joked about his CGI Green Lantern mask in a recent Instagram post (though it looks more like an impression of The Holiday's Mr. Napkinhead than anything else).

It's always refreshing to see a Hollywood star embrace his less than ideal credits. Most actors would probably prefer never to speak of their flops again. But, unfortunately for Reynolds, there's really no escaping Green Lantern. Even the massive success of Deadpool and its highly anticipated sequel isn't enough to fully erase one of biggest superhero flops in Hollywood history. But instead of running from his Green Lantern past, Reynolds has chosen to embrace it. And now, Deadpool fans get to reap the benefits. The only question left now is, how exactly are the writers going to top this Green Lantern joke in Deadpool 3? Who knows, but fans have little doubt they'll find a way to make it happen.