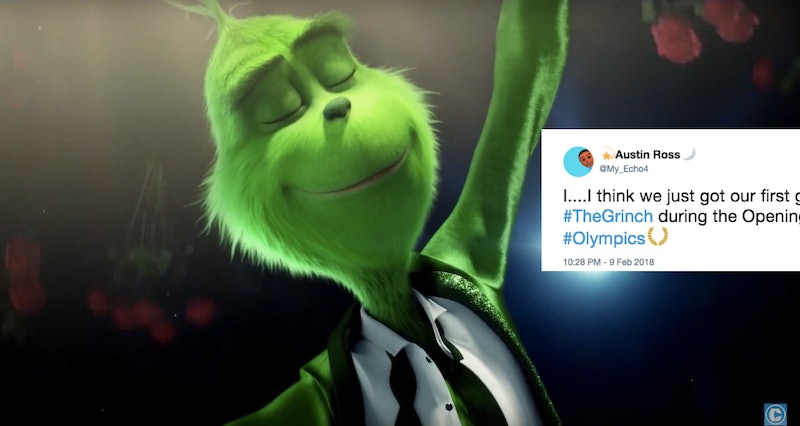 In news that will make even the grouchiest people smile, Dr. Seuss' The Grinch is apparently getting another remake. And during NBC's opening ceremony, The Grinch's Olympics commercial brought out plenty of fan reactions on Twitter. The 30-second spot shows the furry green character following his figure-skating dreams, as Christina Aguilera's "Beautiful" plays in the background. (Well, sort of. It winds up all being a fantasy in his head.)

If you did not know that The Grinch was getting an animated remake, don't feel too out of the loop. Plenty of people on Twitter were equally surprised to discover the ad for the upcoming movie starring none other than Benedict Cumberbatch. Sure, he's not Jim Carrey, but it's hard to not want to give him a shot to woo Dr. Seuss fans. Even if some Carrey loyalists seem less than thrilled on social media to see someone else reprising the role.

The short-but-sweet commercial teases that the movie comes out in the Holiday 2018 season, as the message, "Everyone can dream" appears at the end. Combine that mantra with Aguilera's ballad, and you've got the formula for an inspirational, nostalgia-inducing ad. And seriously, what better time for another The Grinch movie than Christmas time?

But there's a fact that remains: If you remake a movie from '90s kids' childhoods, they're going to have plenty to say. That includes the good, the bad, and the ugly.

Again, not everyone knew this was coming.

Others Were 100 Percent Here For It

What more could you want, really?

And Some People? Eh, Not So Much

These fans didn't even want to give the movie a chance.

A Few Thought He Was *Too* Happy

Mixed messages, considering his name is literally "The Grinch." But shouldn't he get to experience joy in life?

And These People Were Grinch-y Themselves

Like, these viewers were actually angry at the idea of the Grinch getting another shot at the big screen.

At Least Some Applauded The Animation

These people saw the good in the commercial. And not going to lie, the animation does look top-notch.

At the end of the day, a 30-second ad for a holiday movie is hardly something to get super riled up about — especially when the commercial doesn't even reveal much about the movie itself. It's essentially just a sweet commercial, getting fans excited for the remake and the Olympic Games all at the same time. And hey, getting to see the Grinch smile isn't all that bad, given his history of being a bit of a scrooge. It's also nice to know he has other aspirations (of the figure-skating variety), besides trying to steal Christmas.

As a quick refresher, it was in 2000 that Carrey's live-action Grinch movie hit theaters. It may feel fresh in your mind, but that's nearly 20 years ago. And the animated version that everyone grew up watching actually came out in 1966 — yes, more than 60 years ago. At the time, Boris Karloff voiced the titular Grinch, as well as the narrator, according to IMDb. Given the fact that it's been decades since we've gotten another look at The Grinch, there seems to be no time like the present to bring back the beloved holiday icon.

If the Aguilera song in the teaser is any indication, this iteration of The Grinch may be the most modern yet. Maybe there will be more pieces of pop culture scattered throughout. Suffice to say, whatever changes this new Grinch movie brings about, it seems like Twitter will be the first to chime in with their every thought — for better or for worse.

More like this
Reese Witherspoon Gave Fans Hope For 'Legally Blonde 3' After This Surprising Movie Inspired Her
By Jake Viswanath
22 Movies On Netflix That Are Perfect For The Whole Family
By Bustle Editors
Jennifer Coolidge Needs 'Legally Blonde 3' To Happen So She Stops Getting Hot Dog Jokes
By Jake Viswanath
Before 'Bullet Train,' Revisit These Brad Pitt 'Fight Club' Premiere Photos From 1999
By Grace Wehniainen
Get Even More From Bustle — Sign Up For The Newsletter