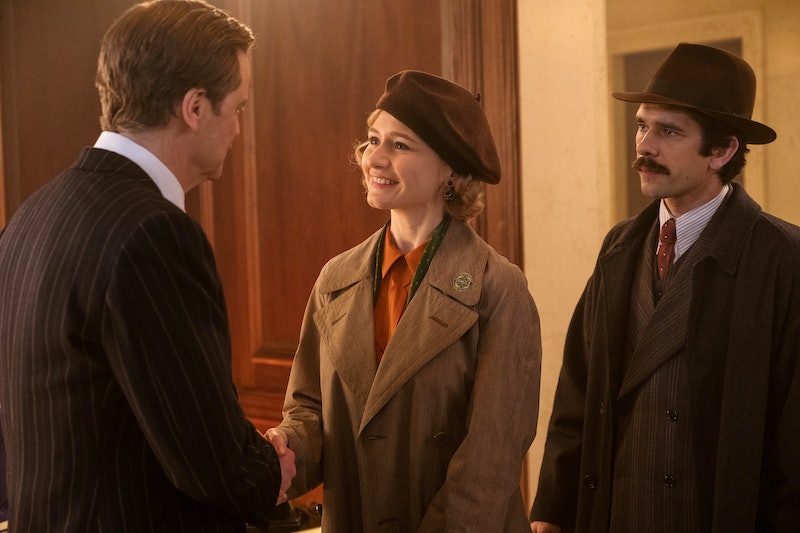 One of the overarching themes of Mary Poppins Returns is that grown ups always forget. The magic and imagination of childhood seem to shrink as we age, and our ability to daydream, play, and have fun can wither away as we get bogged down with the more "important" tasks of adulthood. Which is why Mary Poppins herself, the magical nanny who appears out of the sky, can be as helpful for adults as she can for the children — in this case, two adults she knew first as children.

In fact, one could argue that Mary appears when adults need her the most, rather than when children do. In the original 1964 film, Mary's presence helps Mr. Banks (David Tomlinson) learn that there is more to life than working at the stuffy bank. And now that his two children, Jane and Michael, are grown in the sequel, it's clear they need a little help as well. But one of the more reassuring elements of the new movie is just how much Jane and Michael (played now by Emily Mortimer and Ben Whishaw) held on to some of the lessons they learned when they met Mary for the first time. The nanny may have helped define their childhoods, but the influence of their parents has lasted into their adulthood.

Mary Poppins Returns takes place 25 or so years after the first film. England is in the midst of the Great Depression. (The Great Slump in Britain.) Michael has recently lost his wife and is trying to raise his three children on his own. In desperation after his wife's death, he had taken out a loan against their family house, and now the bank, the Fidelity Fiduciary Bank, the very bank that his father worked for years, has now come to collect. When Mary Poppins returns, the new Banks children, John, Abigail, and George, are more together than their older relatives, with Jane living a busy life and Michael a bit scatterbrained. But still, it's noteworthy how affected Jane and Michael's adult lives are by the events of the first film.

Winifred Banks (Glynis Johns), the matriarch of Mary Poppins and an unapologetic suffragette, would be mighty proud of her daughter, Jane. Throughout the new movie, Jane works as an activist and advocate for labor unions, heading up SPRUCE, the Society for the Protection of the Rights of the Underpaid Citizens of England. This isn't a far ideological leap from when her mother took up the cause to win women the right to vote back in the 1910-set Mary Poppins. Though Winifred was a doting and dutiful wife, she passionately fought for her own right to a voice, and for the voice of her daughter and the women who would come after her. Jane's inheritance of her mother's political strength coms at a trying time as well, considering the film is set during a economically depressed time. Her devotion to helping others shows just how much activism and compassion can be passed down through generations.

But Jane isn't the only one who seems to have learned from her parents, Michael has too, albeit in the opposite way. Michael could not be farther in personality from his father George, but it seems George did indeed have an influence on how Michael turned out. For starters, Michael is about a thousand times more emotionally available than George ever was. Though Michael has moments of sternness, he's tender to his children, he cries openly, he's empathetic, he's an aspiring artist. He's appreciative of his children's' input and listens to their concerns.

Michael grew away from his father's example, even if he's forgotten a bit of his joy lately. “He’s struggling to cope with looking after three children on his own, so he’s trying to be very upright and English and not betray any stress or insecurity, but actually, everything is going completely wrong for him,” Whishaw told Entertainment Weekly. We don't know how Mr. Banks changed after the events of Mary Poppins, he did seem happier and less stuffed up in the end, but more importantly it seems like Michael happily brushed off inheriting his father's toxic masculinity.

Mary Poppins may be right when she says that "grown ups always forget." We may lose the ability to play make believe or imagine certain things. But it's less easy to forget the influence of the people who raised us, whether that impact is positive or negative. "You have to start thinking about the ways in which we grow up and what happens to us as we grow up," Mortimer said of the sequel in an interview with FilmIsNow.

Thankfully for Jane and Michael, their parents personalities and struggles had a positive influence on how they turned out, putting them in a better position to pass their own values along to the children in their lives.