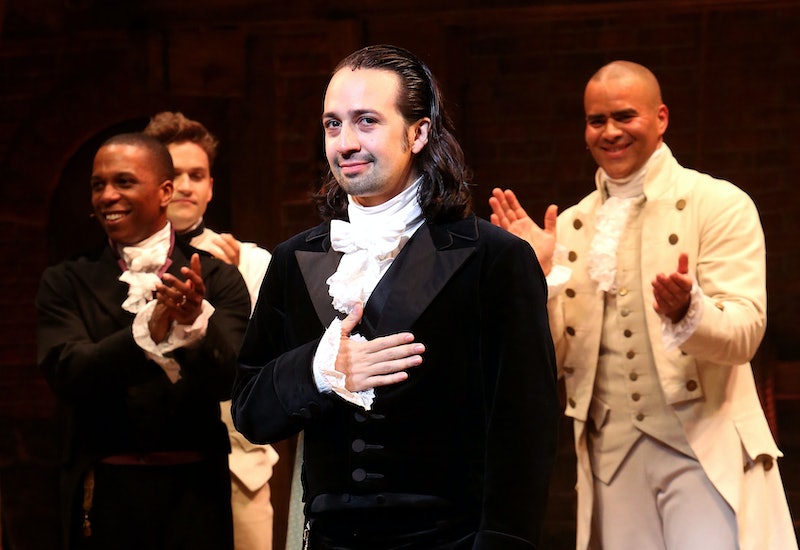 This is probably the closest anyone will ever get to watching the popular Broadway production about Alexander Hamilton with actual cast members. The Hamilton cast is live-tweeting the movie in honor of the musical's debut on Disney+ on July 3. And, of course, Lin-Manuel Miranda himself is joining in on the fun.

The Twitter watch party with the original Broadway cast begins on Friday, July 3 at 7 p.m. EST. There's also a pre-show at 6:30 p.m. EST, and those participating should use the hashtag #Hamilfilm when tweeting. (Don't forget to borrow your friend's Disney+ password for the night!)

It was announced in early May that the filmed version of Hamilton would be available to stream this summer (and just in time for Fourth of July). The Hamilton movie was filmed at the Richard Rodgers Theater in New York City over the course of three days in June 2016, just prior to Miranda and other original cast members taking their final bows. Thomas Kail, Hamilton's original director, also directed the film version.

Seeing as Broadway will remain closed through the rest of 2020 due to the current pandemic, Hamilton on Disney+ is a great way for musical lovers to get their fix. Plus, if you never saw the production on the actual stage, now is your chance — and from the comfort of your own home, all while staying safe.

If you didn't think the film coming to Disney+ would be enough on its own to break the internet, it definitely will now.

More like this
Here’s Everything Coming To & Leaving Netflix In February
By Jake Viswanath
You’ll Definitely Recognise Isadóra Bjarkardóttir Barney’s Mum
By Maxine Harrison
Lisa Marie Presley's Secret Granddaughter Was Revealed At Her Funeral Out Of Nowhere
By Jake Viswanath
Adam Lambert Called Out The George Michael Biopic Over Potential Casting
By Sam Ramsden
Get Even More From Bustle — Sign Up For The Newsletter
From hair trends to relationship advice, our daily newsletter has everything you need to sound like a person who’s on TikTok, even if you aren’t.