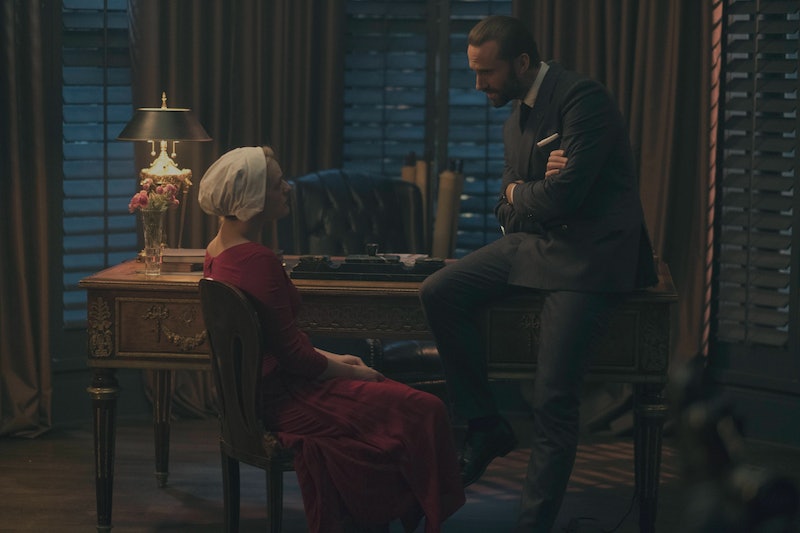 In recent years, the conversation surrounding sexual consent has grown from a quiet rumbling to a deafening roar, inciting nationwide debate about what does and doesn't qualify as rape. These discussions have made clear that yes means yes and no means no, but get murkier when things fall into the space that lies between. But while society is still reluctant to address that gray area with conviction, The Handmaid's Tale episode "Faithful" confronts it head on.

In Gilead's dystopia, most people are barren, and the few fertile women remaining are forced to take part in a monthly "ceremony" that's essentially rape downplayed as a sacred ritual. In it, the handmaids must have intercourse with a Commander — the household patriarch — while his wife physically holds them down. It's not excessively violent, nor do the handmaids verbally object. But make no mistake: they aren't consenting. If the handmaids were to fight back, they would be mutilated, killed, or sentenced to a life of solitude that's somehow worse than the hell they're already living through.

In Episode 5 of The Handmaid's Tale, the show masterfully contrasts consensual and nonconsensual sex. When the commander breaks the ceremony's frigid, unspoken rules and begins to grasp protagonist Offred's leg — he later alleges that he did so for her enjoyment as well — she wills him, wild-eyed, to stop. But he persists, ignoring her silent pleas for his own pleasure and seemingly resting on the false consent of their secret but friendly relationship. In a world where rape is commonplace, he does the only thing he can to further violate her body, transforming a government-mandated act into an intimate encounter Offred visibly rejects.

It's so drastically different from the sex June (Offred's real name) has in a flashback only minutes before, when she'd first started an affair with the man that would become her husband. "Are you sure?" he'd asked gently before they began to kiss. June seemed comfortable, confident, self-assured, even telling him she liked to be on top.

Back in the present, she seizes control of what little autonomy she has left. After confronting the Commander about his behavior, she marches over to his driver, Nick's, room, undresses Nick and then herself, and falls quietly into bed with him. Earlier, they'd had stiff, awkward intercourse by request from the Commander's wife — who was concerned her husband may be sterile — but here, they look passionate and enraptured. When Offred gets on top, she looks liberated.

Both the ceremony and this final scene were wordless, putting them squarely in that uncomfortable gray area we're too often hesitant to define. But the difference between the two is explicit: one was consensual, one was not. Verbal consent is unequivocally a crucial part of sex, but that shouldn't dismiss the experiences that aren't always so explicit. The Handmaid's Tale demonstrates quite strikingly that the boundaries between "yes" and "no" aren't as blurry as some may like to think. Perhaps that's harder to prove in court, but that doesn't make it more difficult to understand.