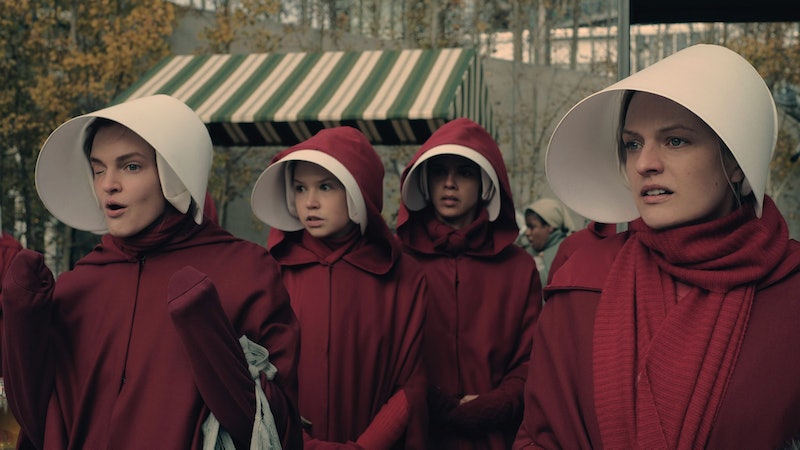 George Kraychyk/Hulu
By Mallory Carra
May 7, 2017

Hulu's The Handmaid's Tale has been giving TV viewers a glimpse of a dystopian, fictional world in which women have been stripped of their rights. And on May 6, the Republic of Gilead was parodied on Saturday Night Live in a spot-on sketch, complete with red robes and men who were a bit clueless about women's rights. The Handmaid's Tale parody on SNL perfectly captured the behavior of well-meaning men in the Gilead — and beyond. In the parody, four SNL women cast members are dressed in Handmaid gear and they encounter two well-meaning men dressed in T-shirts and jeans.

"Blessed be the fruit," the women greet each other, as they do in the series. The Handmaids walk along and talk about "The Resistance" forming. When the host Chris Pine and cast member Mikey Day approach, they act like nothing has changed and even ask the women to hang out. "They took our money, our jobs, and our kids," cast member Aidy Bryant's Handmaid says to them. And the men respond by saying they haven't exactly been paying attention: "Oh right, I think I read something about that, but I was super busy with work," Pine's character says. Meaning well enough, Pine's character suggests that he could put the women in touch with a lawyer and they should e-mail him. "We can't," cast member Sasheer Zamata tells him in the sketch.

Day and Pine's characters slowly realize that women's rights have been totally stripped in this world and they haven't even noticed until now. "Have you heard about this thing with women? It sucks," Pine's character tells Day. It's a chilling, yet accurate portrayal of the Gilead in The Handmaid's Tale, in which the men carry on and have the same rights as they did before, yet women aren't allowed to read or have bank accounts, and they are forced into surrogacy for wealthy, high status families.

And like The Handmaid's Tale itself, the parody is also look at how the world could end up if women's rights are taken away.

Watch the sketch in the video below.