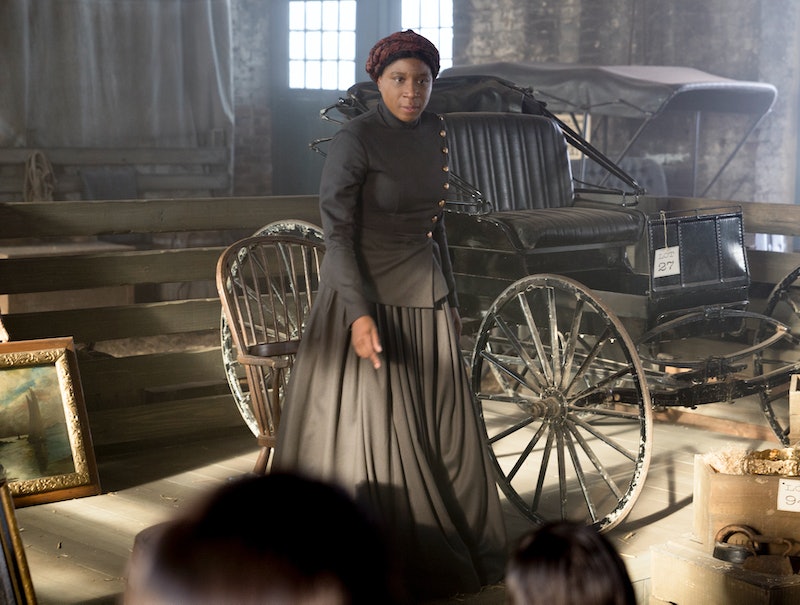 Underground is not a history lesson. While the WGN America series depicts the very real struggles and achievements of the Underground Railroad, it dives much deeper into the humanity of its characters — which include real historical figures — than any lesson would. This lets viewers see themselves in aspects of the characters, which in turn allows them to draw parallels between its time period and the present. Aisha Hinds, who plays Harriet Tubman on Underground, believes that there is a lot to be learned from the series — especially the April 12 episode, "Minty," which focuses solely on Tubman giving a speech to abolitionists.

"It’s amazing that [the speech] is still relevant today, you know, because we’re still sort of in pursuit of many of the things [Tubman] was also in pursuit of," Hinds tells Bustle. An early focus of the riveting speech is the idea that in order to understand freedom, you must first know pain, and though Americans today are facing very, very different issues, the actor believes that remains true.

"I think that when they were in pursuit of freedom, they were in pursuit of a place where they could live and not be enslaved," Hinds says of Underground's characters. "But when we think about freedom, is freedom really limited to a geographical point on a map? Or is it really trying to break down these systems that are in place — systemic racism and sexism, socialism and classism ... breaking down all of these systems that limit us from living and experiencing the fullness of our life experiences on Earth."

But that doesn't mean people who haven't personally experienced systematic oppression can't be allies of those who have, and help break down barriers. For Hinds, the key can be found in scripture, specifically verse Luke 12:48, "To whom much is given ... much will be required." That's essentially the message Tubman is giving in "Minty." Her captivated audience consists mainly of abolitionists, people like Elizabeth, who have been free their entire lives and now want to use their own privileges and resources to help others.

"For those people, who have and who can help, the only other option is to help others," Hinds says, and that applies to both Underground's time period and our current world.

"There’s nothing in life that one person should want to hoard for oneself, we should all assume a broader responsibility and created more real estate in our heart that expands to be more responsible for the entire world, as opposed to just one’s self or one’s own family," she continues.

It shouldn't be forgotten that even though Tubman was born a slave and had to endure horrific hardships throughout her life, she still decided to use her hard-earned freedom to help others. She could've simply enjoyed that freedom and lived an easy life, but she chose not to.

"When [Tubman] went back for her husband, it sort of jolted her, because she had this experience that showed her that freedom is not just limited to her and her family," Hinds says. "There are a whole bunch of other people that would like to experience this thing, and why not? If she has the good and she has the knowledge to share, then why not? Someone had to help her in order for her to get to wear she’s going, so she’s paying it forward."

By paying it forward, Tubman became nothing short of a hero. But Hinds hopes that seeing this more human side of [Tubman] on Underground will make people realize that they don't need to already be heroes to make a difference. "We realize that she was an ordinary human being who was able to do an extraordinary thing," she says.

"For each and every one of us, we’re ordinary human beings, but we all have the power to do an extraordinary thing if we try to put our mind to it," Hinds says, "if we broaden our perspective to include others and broaden our ideas to include equality not just for some, but for all."