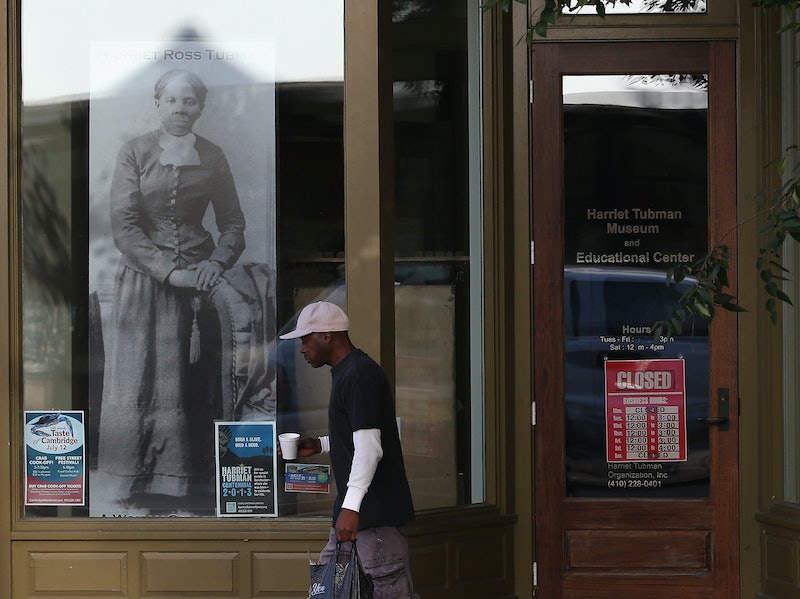 A redesigned $20 bill featuring an iconic American woman won't be in circulation anytime soon, the Treasury Department revealed on Wednesday, per CNBC. The agency's secretary indicated that the Harriet Tubman $20 bill won't be released in 2020, citing security and counterfeiting concerns as the reason for the delay, The Hill reported.

As CNBC noted, Treasury Secretary Steven Mnuchin provided an update on the bill's release timeline — and insight into the impetus behind the delay — during a hearing of the House Financial Services Committee. “The primary reason we have looked at redesigning the currency is for counterfeiting issues,” Mnuchin said when responding to questions from Democratic Representative Ayanna Pressley, per CNBC. “Based upon this, the $20 bill will now not come out until 2028. The $10 bill and the $50 bill will come out with new features beforehand.”

Fortune reported that the redesigned $20 bill featuring Tubman was originally supposed to be released in 2020 to commemorate the 100th anniversary of the 19th Amendment, which guaranteed women's right to vote. However, in April, the Treasury Department said that delays in design approval and finalization pushed back redesigned bill's release year to 2026, the outlet noted. Now, as the hearing indicated, this delay is even longer.

As ABC News noted, the Tubman $20 bill was first announced in 2016 by former Treasury Secretary Jacob Lew as part of an initiative to ensure that more women are represented on American currency. As part of Lew's plan, a redesigned $20 bill with Tubman replacing former President Andrew Jackson was supposed to be released in 2020. A new $10 bill design featuring women's rights activists Alice Paul and Marian Anderson on the back and a redesigned $5 bill with Martin Luther King, Jr. on the back were also announced as part of this package, Forbes reported.

However, as The Hill indicated, Mnuchin has repeatedly said that he's not sure if he will implement Lew's plan for changing the bills' images. Mnuchin noted on Wednesday that the final decision about whether or not to change the imagery on the redesigned $20 probably won't happen until 2026, when he's likely no longer secretary, The Hill reported.

Notably, as ABC News reported, President Trump has indicated that he doesn't necessarily support replacing Jackson with Tubman on a redesigned $20 bill. "Andrew Jackson had a great history,” Trump said during a Today Show interview in April 2016, per The Daily Beast. “I think it’s very rough when you take somebody off the bill." Trump also suggested adding Tubman's image to a different bill. "I would love to leave Andrew Jackson [on the $20] and see if we can maybe come up with another denomination [for Tubman] — maybe we do the $2 bill or another bill," Trump said on the show, via The Daily Beast.

Amid the Trump administration's delay in releasing a $20 bill featuring Tubman, members of Congress have introduced legislation to try to hasten the process. In February, Reps. John Katko and Elijah Cummings reintroduced the Harriet Tubman Tribute Act to seek to ensure that Tubman's image is "on $20 Federal Reserve notes printed after December 31, 2020," a press release announced.

Congress.gov indicates that this bill has not yet been voted on. It remains to be seen whether representatives will push for movement action on this bill following the Treasury Department's latest announcement.

More like this
What Is Harry & Meghan's Net Worth? They're Richer Thanks To Their Netflix Doc
By Hugh McIntyre
Is Blake Lively Or Penn Badgley The Richest 'Gossip Girl' Star From The OG Series?
By Hugh McIntyre
An Open Letter To The Person Who Bought Steve Jobs’ Birkenstocks For $218,000
By Ginny Hogan
Silvio Scaglia Is Wealthier Than 'My Unorthodox Life' Star Julia Haart
By Radhika Menon
Get Even More From Bustle — Sign Up For The Newsletter