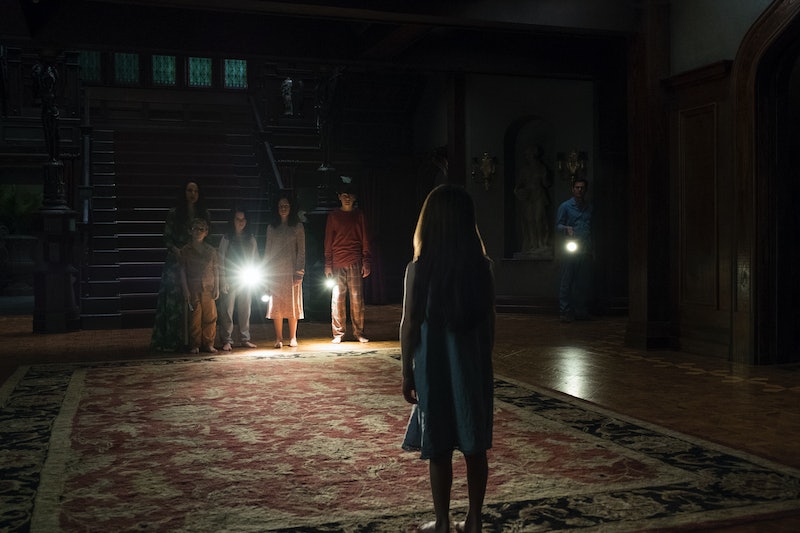 The Bent-Neck Lady may be gone, but luckily, Hill House won't be forgotten. That's because The Haunting Of Hill House Season 2 is officially happening. On Thursday, Feb. 21, Netflix announced a new deal with Hill House creator and director Mike Flanagan and his producing partner Trevor Macy that includes an "all-new chapter in The Haunting anthology," according to a press release obtained by Bustle.

Netflix confirmed the news about a Season 2 while also revealing that this new installment in the horror anthology series will focus on a new story with new characters. This lines up with what Flanagan has previously said about a possible new season of the horror series. In an October interview with Entertainment Weekly, Flanagan said that "as far as I’ve ever been concerned with this, the story of the Crain family is told. It’s done."

According to Deadline, the new Haunting installment will focus on a new family and won't even take place in the same house. Something, Netflix teased on Twitter: "A new Haunting is coming. Can you guess where it takes place? Listen closely...".

The accompanying clip includes creepy whispers that are talking about this new location that includes a garden and a "great emptyness," which is really not much of a giveaway to what is going on here. Though, let's be honest, the less you know about the show, the more likely it is to freak you out when it returns in 2020.

Luckily, Flanagan confirmed the new title of the latest installment in the series, tweeting, "That’s exactly right... THE HAUNTING OF BLY MANOR."

Moments later, Netflix also confirmed that the new chapter of Haunting Of Hill House will be "based on the works of Henry James." According to Deadline, Bly Manor is the setting of James' 1898 novella The Turn Of The Screw. The psychological thriller that is also a ghost story tells the story of a young governess and the two children she's been tasked with looking after who live in a country home that is filled with secrets.

The Turn Of The Screw almost entirely takes place in Bly Manor, but it is clear from Netflix's description of the season it will also include other nods to James' work. As of now, it's unclear which works that is referring to.

While it's unlikely, it's also unclear whether this upcoming installment will feature any actors from the first season. As of now, Netflix has not shared any casting news, but it's clear the Crain family will not be back. It's something that Flanagan was previously adamant about in an interview with TVLine back in November and it seems he was able to hold that line. “I don’t really see a need to revisit those characters, even in cameos," he said then. “I want to remember them the way we left them, and leave them to their lives.”

After all, there are other lives he wants to delve into that are also being haunted by the ghosts of a mysterious house. This time, instead of Shirley Jackson, these characters will be inspired by Henry James.

More like this
'The Sandman’s Ending Is A Departure From Neil Gaiman’s Comic Book Series
By Kadin Burnett
Everything To Know About 'Evil' Season 4
By Meguire Hennes
Who Plays Trent In 'Never Have I Ever'? Benjamin Norris Calls His Character A “Himbo Stoner”
By Grace Wehniainen and Radhika Menon
Everything To Know About The Sandman Season 2
By Kadin Burnett
Get Even More From Bustle — Sign Up For The Newsletter