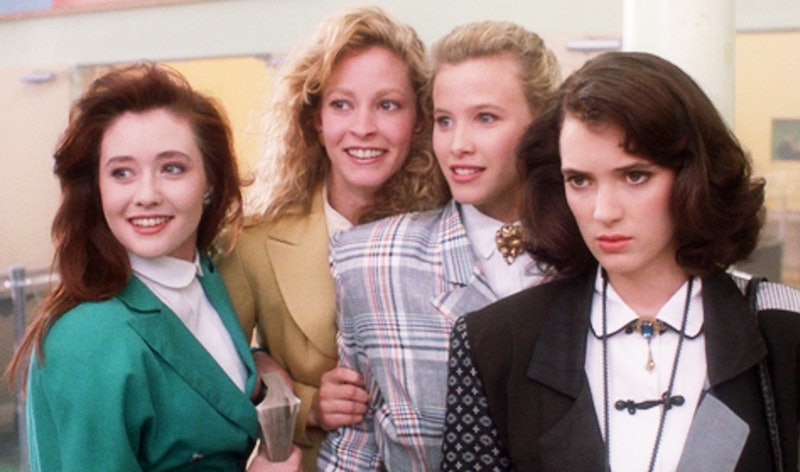 There hadn't been much talk lately about that hotly anticipated remake of your favorite '80s movie — so thank goodness that some new information about the upcoming series has finally dropped. You may be wondering, when will the TV series Heathers air? I've now got an answer. According to Variety, TV Land has greenlit the project for 10 episodes set to air in fall 2017, which means it's happening this frickin' year. How very.

Variety reported that Heathers will mark the first time TV Land will air hour-long episodes, which is also pretty cool, as is the premise. Forget a wincingly nostalgic attempt to recreate the film's magic. Described by the network as a “pitch-black comedy anthology set in the present day,” the show follows a band of outsiders with the same names as the original Heathers, who have become the ruling clique at their high school.

As for the cast, roles were announced back in October. Shannon Doherty's original character Heather Duke will be played by Brendan Scannell in the updated role of a man who, according to Variety, "identifies as gender-queer and whose real name is Heath"; Lisanne Falk's Heather McNamara will now be a black lesbian incarnated by Jasmine Mathews; and Kim Walker's Heather Chandler will now be played by Melanie Field.

Meanwhile, if you're wondering who will take what effectively were the film's two lead roles, Veronica Sawyer (Winona Ryder) and J.D. (Christian Slater), these roles will now be played by Grace Victoria Cox (who clearly loves revolutionary reboots, since you'll also see her in Twin Peaks this year) and James Scully.

So, things sound radically different, right? The outsiders have become the insiders, which totally upends the original story. However, this has to be the absolute best way the series could pay homage to the incredible movie. After all, the joy of the movie wasn't the scrunchies or the synth or even the remarkable Ryder. What really set the movie head and shoulders above the rest was the way it managed to capture an epoch in a genuinely original way.

As such, if the Heathers remake simply took us back to another '80s high school and spun out the same story, but longer (because it would have to stretch out across 10 hours instead of almost two), this wouldn't do the movie justice. Part of the joy of Heathers was its danger — you weren't sure whether you should laugh or be appalled by the casual violence, building bodycount, and brutal one-liners. From the sounds of things, the new series will tread a similar uneasy tightrope in terms of who viewers are meant to root for — audiences are trained to support the underdogs, but if the underdogs have become the meanest clique in school — because, let's be real, a Heathers remake wouldn't really permit a nice clique — what happens then?

It won't be long until fans find out. And until then, you know what to do: marathon that movie that never got old enough for you to feel truly comfortably watching, and enjoy the queasy fun of Westerburg High School and its social system.