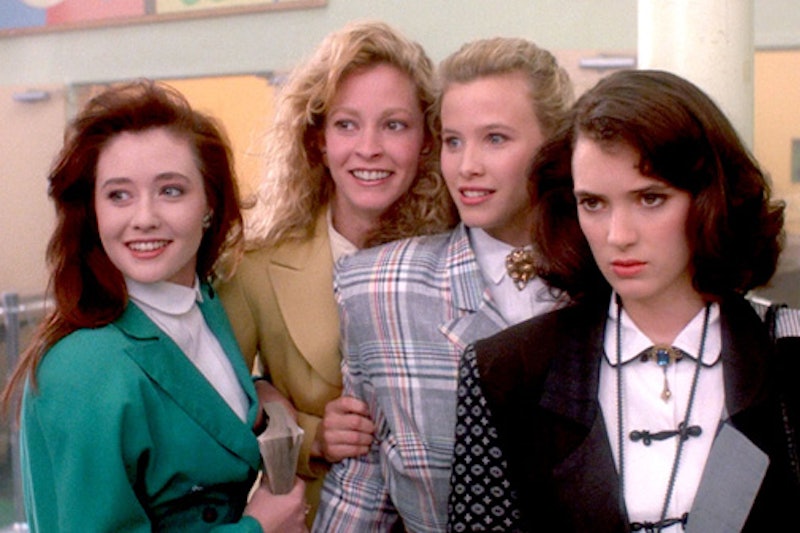 Heathers is one of those films that sets the bar for other films to follow. Its preppy Heathers fashion, darkly comedic style, and cliquey girl politics have been reborn in a number of movies and TV series since. Mean Girls appeared to be inspired by the bitchy trio of Heathers, Gossip Girl had a well dressed clique with a fearsome leader, and late '90s cartoon Recess had a girl gang with all the members named "Ashley," who each wore a signature color, just like the Heathers.

This legendary movie is still affecting popular culture today, almost 30 years after it was released. New series Scream Queens , which is to hit our screens in September, boasts an equally vicious pack of young women (all comedically named Chanel) who are on the run from a masked killer — it appears to have the same black humor thriller feel to it that made Heathers so unique.

Although we may not admire the Heathers' nasty personalities and spoiled brat attitudes, one thing I think they did the right way was their choice of fashion pieces. IMO, their style is a fabulous mixture of Clueless power dressing, Blair Waldorf preppy, and '80s youth. So prepare to become "so very" while you change your name to Heather, and get ready to look like the fifth member of the original Mean Girls.

The Heathers were renowned for wearing a signature color throughout the movie, which symbolized their status. The leader Heather Chandler wore red to symbolize power, Heather Duke wore green as a nod towards her jealous streak, and Heather McNamara sported yellow and was viewed as the weak link of the group.

If you have a group of gal pals and you fancy channeling the Heathers for a day, take a different color each. If you are flying solo, pick your favorite color and make sure everything in your outfit is color coordinated.

The girls all wore blazers throughout the movie. The shoulder padded blazer was an '80s staple, which proved that this movie was very on trend for its time. Plaid was popular with Ms. Chandler who wore it in a preppy Cher Horowitz fashion; although it could be argued that Cher stole the plaid look from Heather Chandler as Clueless was released after Heathers.

IMO, the blazers made the girls look mature and a lot older, possibly because the themes of the movie are rather adult, and it is not until the girls are in a vulnerable position and freed of their blazers that you realize how young they actually are.

Put a modern spin on the '80s power blazer with this relaxed, waterfall style available in sizes 8 to 28.

The peplum on this bright green blazer gives an often androgynous garment a feminine feel.

Be the opposite of the weak-willed Heather McNamara in this bold and bright, neon yellow blazer, which is a great choice for summer.

The humble scrunchie was used as a metaphor for power in Heathers; the girl who wore the scrunchie was the leader of the pack and the most powerful and popular girl in school. Plus, it was an '80s staple in any teen girl's vanity box.

Be the leader of your girl gang in this pink, oversized scrunchie. Pink will be a fashion hit this fall, so take a leaf out of Regina George's book and wear this scrunchie to accompany your pink attire on Wednesdays.

It was all in the details for the Heathers and newbie Veronica, as shown here by Veronica in her pretty, pale blue tights.

Plus Size Nylon/Lycra Tights, $16, A mazon

These plus size tights come in a rainbow spectrum of colors; in fact, there are 20 to choose from! So whether you're feeling vivacious and fancy wearing a bright orange pair, or calm and collected and wish to wear a pair of grey tights, you'll be spoiled for choice.

Throughout the film, various characters are seen sporting florals. This black jacket with a blue and yellow floral color scheme adds a dark feel to a normally cheerful pattern, which causes an edgy juxtaposition.

Keep cool this summer in a flower print kimono. The dark background and blue blooms give a nod towards Veronica's floral jacket.

Doesn't Heather Duke look absolutely rad in that cute shirt and plaid braces combo? She would have made a great Tai in Clueless; after the makeover though, obvi.

How totally cute are these polka dot suspenders? The monochrome color palette will ensure that these suspenders will go with almost any outfit.

The epitome of preppiness has to be a vintage cheerleader uniform. Worn by a less than cheery cheerleader, it makes an ironic statement and it's an easy style to wear during summer.

Check out this 1970s varsity cardigan — it even has a large "W" on the front so hardcore fans can pretend they attended Westerburg High School, too.

So grab your closest gal pals, pick a color, and get channelling the Heathers today. Just don't go around murdering your classmates — nobody likes a real mean girl.