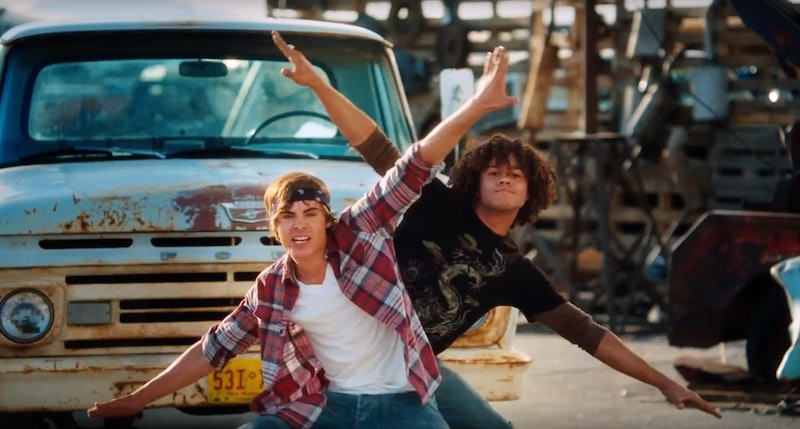 "Goodbye clouds of grey, hello skies of blue": Details about the new High School Musical TV show are here, as reported by Variety. And for fans of the third movie in the trilogy, High School Musical 3: Senior Year, the plot will sound very familiar. The new show, which will debut on Disney's upcoming streaming service, will be titled High School Musical: The Musical.

Fans will remember that in the third movie, the East High students put on a musical titled "Senior Year" about their high school experience. It sounds like the TV show will be in a similar vein, with a new crop of students putting on a production that's actually called "High School Musical."

Anyone who hoped to see more of "Twinkle Towne" will be sorely disappointed. And fans of Senior Year will probably feel old after learning the premise of the new show is extremely similar to the 2008 movie. Still, it's nice to know the original trilogy's legacy lives on. If the new show's premise wasn't nostalgic enough, Variety also noted that every episode of the new series will include a cover of an original High School Musical song.

There's one major change to the original movies, though. Variety reported that the 10-episode TV show will be a "docu-style series," which could put it more in the vein of American Vandal or The Office. Could a shy outsider, like Kelsi from the original movies, be behind the camera?

Disney has also released a shortlist of characters that will appear in the new movie. And based on Variety's report, it sounds like there will be a love triangle among the show's leading characters. There's Nini, a singer on the rise who's finally taking center stage in the school's new theater production. When Nini breaks up with her boyfriend Ricky to pursue another student, E.J., Ricky decides to audition for the musical to win his ex back, which sounds like a totally solid and foolproof plan.

The character descriptions Variety shared call Ricky "a B-minus student" and a "skater." E.J., meanwhile, is described an "ambitious entrepre-nerd." There are also some supporting characters, including E.J.'s cousin Ashlyn and Ricky's friend Big Red. (Yes, that's really the character's name.) And apparently, the students' drama teacher, Miss Jenn — what happened to calling teachers by their last names? — is a single woman who "left New York under mysterious circumstances." It's a lot to take in.

Nothing's been announced about the show's casting yet, and it sounds like Disney is still deciding who should star in the new series. Of course, some fans already have their own ideas.

Others, meanwhile, aren't as excited about the new show's title and premise.

The original movie's main cast haven't tweeted about the new show's details. There's no word on whether any of the stars would come back for a quick cameo, but it's not totally outside the realm of possibility. After all, the third movie hinted that Sharpay, at least, was interested in helping the East High's drama department. (In some ways, though, it would probably be healthier if the original cast didn't show up — no one likes the people who can't stop reliving their high school glory days.)

Fans looking forward to the new show are in for a wait, though. Disney's streaming service isn't expected until the end of next year, so it will still be a little while before any new High School Musical songs are here. In the meantime, High School Musical 3 is available for streaming on Netflix, so fans can still get their East High fix.