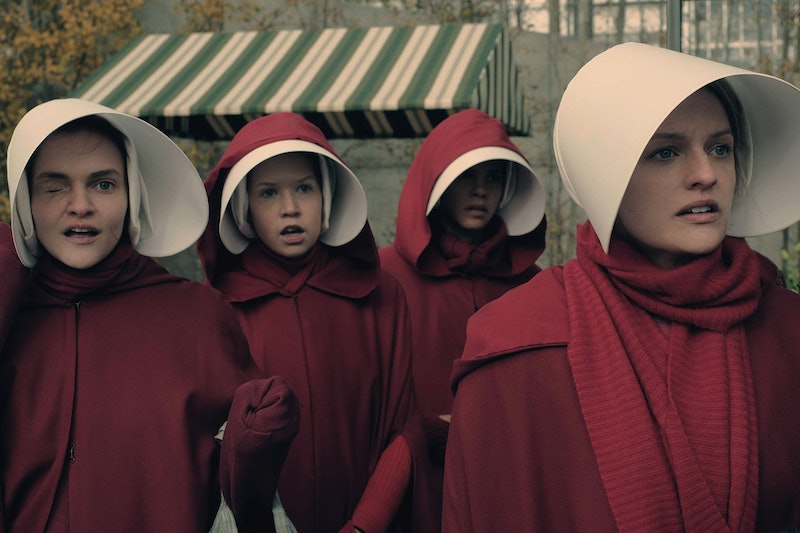 If you've somehow made it through the year of 2017, you've probably heard the word "dystopia" being thrown around. You've heard it applied to books like 1984 and The Handmaid's Tale, to television shows like Black Mirror and The Handmaid's Tale to the corporations that watch us through our webcams and read all our mail and, most likely, to the current state of world politics. Dystopias are a staple of our summer blockbusters and our YA franchises. Dystopias are so popular that we can all identify and mock the clichés of a generic dystopian novel with ease. Dystopias, in a word, are "in."

They're so in, in fact, it's easy to forget that the dystopian novel started out as the glum, ironic child of another genre: the utopian novel. Before we had Katniss or Offred or Tris, we had stories about potential nice futures. Utopian literature embodied humanity's hope for society, not just our fears. There were distant lands where everyone had figured out how to share and no one ever went hungry, socialist paradises, and chill colonies on the moon. And before any of those, we had Thomas More's Utopia, published in 1516.

Most translations just go with Utopia, though, the name of More's imagined island nation. More coined the term himself, combining the Greek words for "not" and "place" to create "Utopia," meaning "No Place."

His book was not the first to describe a fictional, "perfect" society—Plato did that back in 380 B.C.E. But More's book popularized the idea of writing about fictional societies as though they were real. His Utopia was not a potential future, but an undiscovered island somewhere in the vicinity of the Americas. In the book, the island is home to a peaceful, communist society, where everyone eats in dining halls, each family has two slaves, priests can marry, and pre-marital sex is punished by a lifetime of celibacy. It... doesn't quite line up with any modern political belief system. More himself seems to have written Utopia mostly as a joke, or a satirical send up of European society at the time, given that the book is full of humorous asides. He even signed his name as "Morus," which is Latin for "fool."

Nevertheless, More had started a trend of "utopian" literature. Some authors took his basic premise seriously and created their own idealized visions for society, like in Sir Francis Bacon's New Atlantis, where everyone is generous of spirit and grad students have infinite funding. Others took the satirical bent further, and wrote explicitly sarcastic takes on the utopia. Voltaire's Candide and Jonathan Swift's Gulliver's Travels, for instance, portray societies that claim to have everything all figured out. In practice, though, these fantasy lands are just as much of a hot, petty mess as anywhere else.

Swift famously said that he wrote his book "to vex the world rather than divert it," which is certainly kin to the sentiment of most dystopia writers.

All of these stories still took place on lost islands or undiscovered continents or (occasionally) the moon, though. These utopias weren't about the future so much as they were about finding far off lands, or undisturbed relics from the idealized past. It wasn't until the 1800's that utopian novels started to look forward with Edward Bellamy's smash hit, Looking Backwards.

By 1888, most of the globe had already been mapped, so there were no lost continents to find. Charles Darwin had already planted the idea of evolution in the public consciousness, and people were obsessed with "social" evolution, advancing technology, and general progress. That's when Bellamy published Looking Backwards, a novel about a man who falls asleep and wakes up in the year 2000, to find that America has become a socialist utopia. People loved it. It became the third-bestselling book ever at the time, and the futuristic utopia genre exploded.

There were dozens of optimistic utopian romances hitting the shelves, all of which promised a better future for humanity than the economic depression of the late 1800s. Then came the novels that satirized Bellamy, or put forth their own, anti-socialist utopias. Finally, someone had the startling thought of, "Wait... but what if the future... is bad?"

Published in 1895, H.G. Wells' The Time Machine was one of the first notable examples of this new, scary-utopia genre. In Wells' book, a guy builds a time machine and goes forward in time to find that humanity has formed a seemingly perfect society... which soon turns out to be horrific and full of monsters. Sorry, guy.

Wells was followed by Yevgeny Zamyatin with We, Aldous Huxley with Brave New World, and George Orwell with 1984. By 1948, when Orwell was writing 1984, utopias had gone from seeming optimistic to downright silly. People had lived through fascist police states and two World Wars. Orwell himself had served as a British police officer in Burma, and observed the oppression of imperial colonialism firsthand. The social Darwinist idea that society just keeps getting better wasn't nearly as popular anymore. No one wanted empty promises of some fictional better future. Dystopias were here to stay.

Of course, utopias haven't died out entirely. Novels like Ecotopia or Woman on the Edge of Time present possible, future solutions to impending ecological doom and social injustice. Star Trek depicts future Earth as a peaceful, socialist world (hence why all the action takes place out in space, where there are still mean aliens). Trump's presidential campaign evoked a vague, idealized, golden age of the past with the phrase "Make America Great Again." Utopian thinking is certainly still alive in some form or another.

Our reading tastes, however, have veered sharply to towards dystopias over the years. They feel more "real" to us than the utopian fantasies of the past. They are real: oppression and fascism are far more common in human history than magical paradise islands. As Margaret Atwood once remarked about The Handmaid's Tale, there's "nothing in the book that didn’t happen, somewhere."

Dystopian novels allow us an outlet to examine our values, or fears, and our desires to fight back against injustice. They allow us to vent our frustrations at having inherited a ravaged planet and an increasingly corrupted government. Dystopias are also the grimmer, sexier descendants of Thomas More and the other satirists who wanted to point out the flaws in their own society by imagining a fictional one. "Utopia" was never meant to be an aspiration, after all. "Utopia" was meant to be "No Place;" an impossibility.

Perhaps we can never recapture the optimism of those utopian novels of old, but there is a reason that dystopias are always set in the future. There's that slim hope that we might heed the author's warning, after all, and make ourselves a better future than this. Even the grittiest of dystopias share the same quiet message underneath it all: there's still time. Let's just hope we listen.