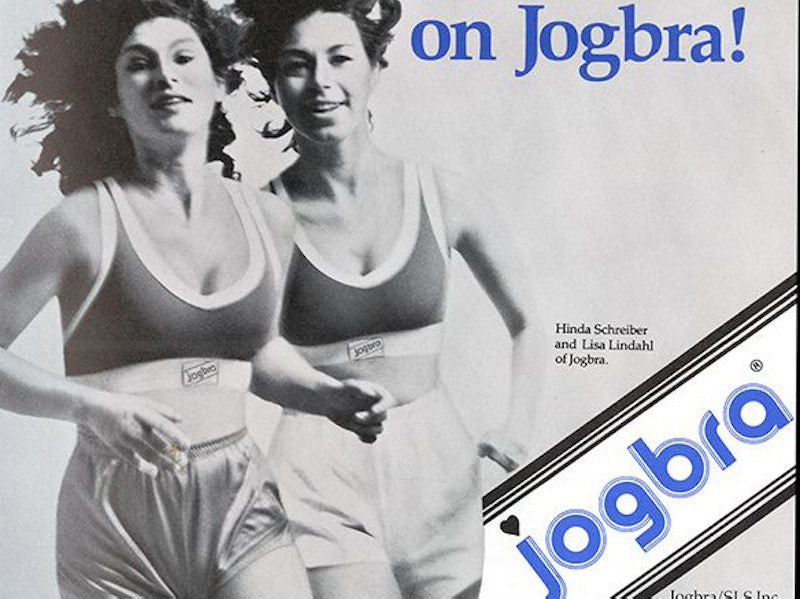 Chances are when you dump your gym bag into the laundry, you don't think too much about its contents. There are a couple of sweaty gym socks in there, a cute racerback top, leggings that have seen better days — but what about the sports bra? The history of the sports bra is an interesting one, where strapped-in boobs signaled a rise in equality, which is surprising when you think back to the bra burning days of the '70s. But as it hits its 40th anniversary this year, it's impossible to overlook how closely linked it was to women muscling their way into locker rooms and earning their spot on sports fields.

But the rise of ponytails on fields and courts didn't happen because of a natural evolution; there wasn't a women's league boom in that era because girls decided they were no longer content taking Home Ec classes and waving team flags from the bleachers. There were specific social forces at play that lead to them joining teams en masse, and requiring the bra to show up in their underwear drawers. In honor of its birthday, ahead is the fascinatingly feminist history of the sports bra, and the very real struggle it went through to get into our hampers.

More like this
Here’s What Happened When I Wore Good American’s Butt Cut-Out Jeans In Public
By Bella Gerard
All Of Kourtney Kardashian’s Wedding Dresses
By Allie Fasanella
10 All-Denim Outfits Inspired By Billie Eilish, Bella Hadid, & More
By Allie Fasanella
Megan Thee Stallion Just Brought Back 2004's Favorite Handbag
By Dominique Norman
Get Even More From Bustle — Sign Up For The Newsletter