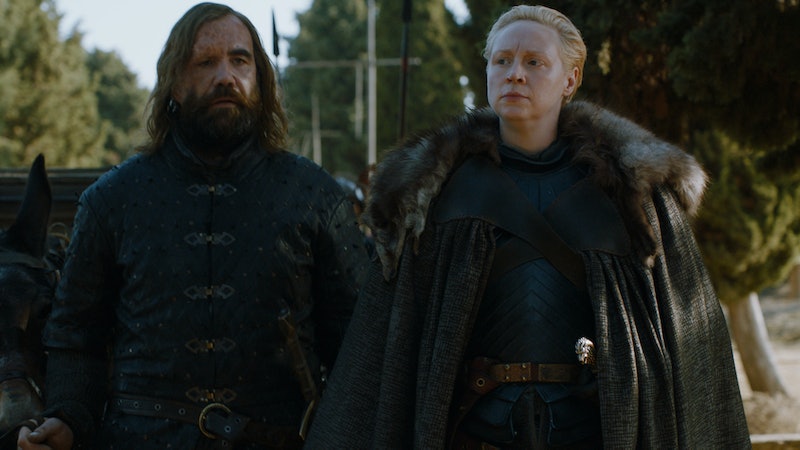 The Season 7 finale of Game of Thrones was all about legacy. The Lannister legacy that will be continued on by Cersei's child, the Targaryen legacy that Jon Snow is unknowingly carrying on, and the Stark legacy that the children are keeping on by killing the man who betrayed their father. However, the best moment of the episode came when the show celebrated a different kind of legacy — one that's not connected by blood, but by circumstance. The reunion between The Hound and Brienne was the most underrated moment of the Game of Thrones season finale because it said so much about legacy, with so few words.

The idea of legacy in Game of Thrones is usually mentioned alongside bloodlines and family, but not being related didn't stop Brienne and The Hound from being the proudest parents in all of Westeros. Their reunion in the finale was brief, but meaningful, as it was the first time they had interacted since Brienne left The Hound for dead in Season 4. It was also the first time they've gotten to speak about Arya, whom they both had a hand in raising. Needless to say, these two skilled fighters are very proud of the little murder machine that they both helped to raise.

Between the two of them, The Hound has undoubtedly spent more time with Arya. He's led her through Westeros and showed her the merits of not having emotional attachments. Yet while The Hound has had more hands-on experience with Arya, Brienne has had Arya on her mind for a long time per her promise to Catelyn Stark to protect her kids. Whatever Brienne and The Hound's differences with each other or their unique relationships with Arya, when the two finally reunited, it wasn't long before they bonded over discussing Arya's fate.

Brienne informed The Hound that Arya was still alive and safe at Winterfell, and when asked who was protecting the Stark child, Brienne explained that "The only one who needs protection is the one who gets in Arya's way." Brienne and The Hound are two of the most skilled fighters in Westeros and can now count Arya among their ranks. It's a big difference from when The Hound knew Arya, back when she was a burgeoning fighter seeking revenge. Now, she's an accomplished assassin that is mercilessly doling out justice to those that have wronged her. The Hound doesn't yet know the lengths to which Arya has gone to murder her enemies, but he'd sure be proud.

As such, the legacy of Arya isn't just as Ned and Catelyn Stark's daughter. She also carried the legacy of The Hound, who trained her to stop being sentimental and remove emotion from a fight, as well as the legacy of Brienne, who showed Arya that women are not powerless in the world of Westeros. While Brienne and The Hound can't take credit for everything that Arya has become, their pride shines through and becomes one of the the best scenes in a finale filled with huge moments.

This reunion may not be as satisfying as Littlefinger's death or as exhilarating as the crumbling of The Wall, but Brienne and The Hound talking about Arya serves as a reminder that Game of Thrones isn't just a story about dragons and zombies. It's also a story about families, related by blood or circumstance. Brienne and The Hound just so happen to be the proudest parents of the most lethal makeshift family in all of Westeros.