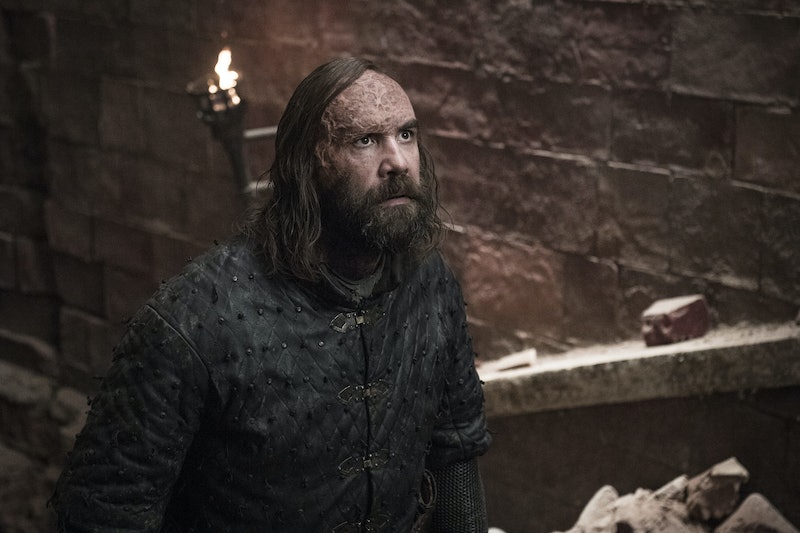 The Hound may not have been the easiest character to root for on Game of Thrones, at least not initially, but at the end of Sunday night's penultimate episode "The Bells," he faced two of his biggest fears head-on: his brother, The Mountain, and fire, and it was impossible not to root for him. The highly anticipated Cleganebowl may have resulted in neither brother making it out of the Red Keep alive, and yet the Hound's fate on Game of Thrones still felt like a victory for Rory McCann, the actor who played the character over the past decade. In fact, McCann couldn't be happier with how the Hound's storyline came to a close, because while the ending resulted in his death, it allowed him to achieve his ultimate goal: revenge on his older sibling.

"I’m very happy with the way The Hound’s story ends, thank you very much," McCann stated during a recent interview with Entertainment Weekly. "I love all the endings. I don’t know how they managed to sew it all together." Though, surprisingly, as much as the actor has enjoyed his time on the series, he hasn't actually watched much of the show at all. That being said, he does have a plan in place to watch the whole thing in its entirety now that Game of Thrones has officially wrapped. "I haven’t watched the series much. Only watched a few episodes," he admitted to EW. "I don’t watch the telly. And when the show’s on I’m usually out in the wild sailing or something. I’m looking forward to getting the whole box set and then I’ll watch it when I get the flu."

So at least he has something to look forward to the next time he gets sick.

Having come to know his character fairly well over the past 10 years, McCann is beyond grateful for all the different facets of the Hound's personality he's been able to explore. But the scenes he's enjoyed the most are the ones between him and Maisie Williams, who plays Arya Stark. "I’ve enjoyed all the Arya/Hound road trip stuff," McCann revealed. "Those were my fondest memories. Anything outside usually because I’m so hot that I’m more comfortable."

In regards to the specific scene he's most proud of, McCann immediately harkens back to another strong female costar he had the privilege of working closely with: Gwendoline Christie. "I loved doing the Brienne fight. That was great fun," McCann recalled. This is, of course, in reference to the epic battle that took place between the Hound and Brienne in Season 4. Given that Brienne ended up winning the fight, it makes you wonder how she would've faired against his big brother, The Mountain. (#TeamSerBrienneForever)

Looking back on it all, though, McCann wouldn't change a thing — however, he wouldn't have said no to a potential Hound-centric spin-off had his character actually lived. "It would have been nice to keep living and go on a road trip and do a spin-off," he said during the same interview. "But I’m absolutely delighted. I’m blessed to be given this storyline." And it was an honor for us to watch it all unfold.